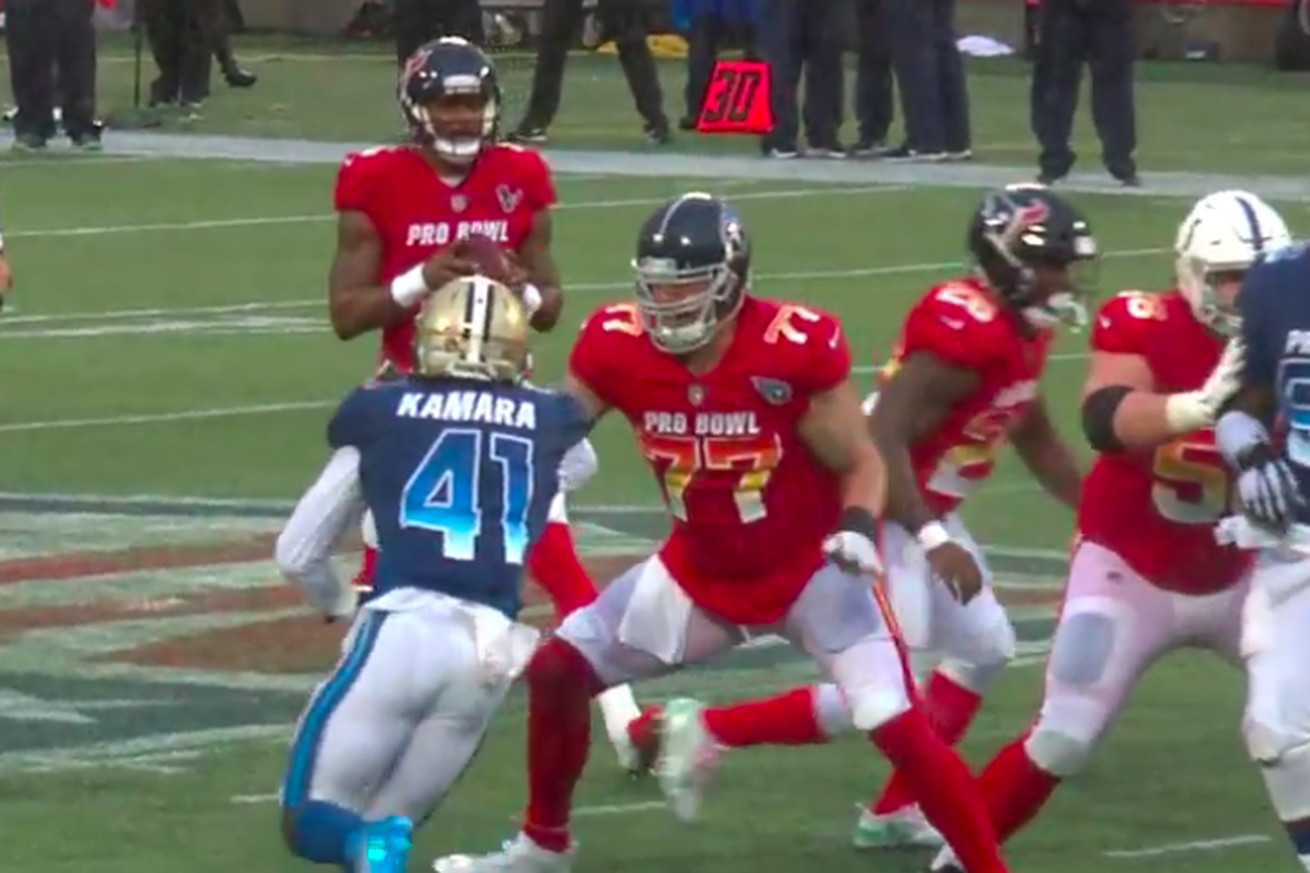 Taylor Lewan wasn’t happy about it, either.

Taylor Lewan is one of the NFL’s best tackles. He’s been a Pro Bowler in each of his three seasons as a pro, keeping the Titans’ quarterbacks protected against some of the best defensive linemen the AFC has been able to throw at him. He’s stifled players like J.J. Watt, Jadeveon Clowney, Calais Campbell, and Darius Leonard to keep his offenses churning — but on Sunday, he met his match.

JASON GARRETT PUT ALVIN KAMARA AND SAQUON BARKLEY IN AS PASS RUSHERS ON FOURTH DOWN AND IT WORKED pic.twitter.com/u47gwJ9v3E

Jason Garrett proved he cares as much about the Pro Bowl as the rest of us Sunday, running his team like a 12-year-old who found a neglected copy of Madden ‘04. The exhibition’s two-hand touch tackling rules effectively eliminated the run game from either side, so Garrett got creative when it came to getting his tailbacks involved.

First, Cowboys tailback Ezekiel Elliott got the chance to run aimlessly behind the line of scrimmage.

And then, with fourth-and-9 looming in the fourth quarter, he called on Elliott and Kamara to bolster his edge rush. AND IT WORKED.

JASON GARRETT PUT ALVIN KAMARA AND SAQUON BARKLEY IN AS PASS RUSHERS ON FOURTH DOWN AND IT WORKED pic.twitter.com/u47gwJ9v3E

Lewan, not wanting to crush Kamara into powder at an exhibition game, gave the Saints’ rusher a little chip before allowing him on his merry way. Deshaun Watson, perhaps thinking Kamara was actually going to tackle him, rushed an incompletion that fell to the turf. It was a combination that had Lewan cursing on his walk back to the sideline — but that could have been over the fact he was playing in rainy Orlando in a 45-degree day rather than in Hawaii, where the Pro Bowl had been played all but two times between 1979 to 2015

That gave the NFC the ball and set up their first scoring drive of the afternoon — a touchdown that prevented a shutout at the world’s least important all-star game.