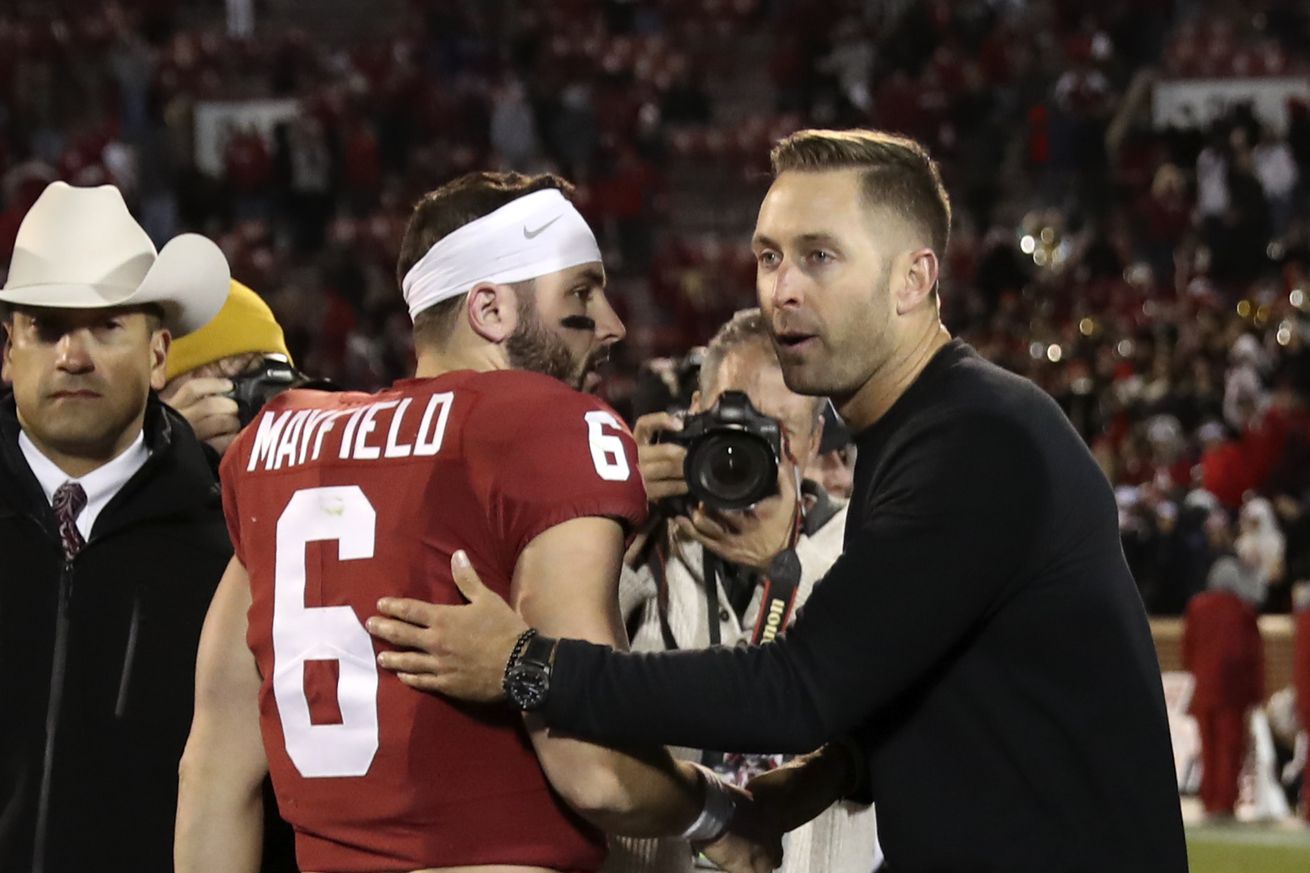 Mayfield played under Kingsbury at Texas Tech in 2013, and it didn’t exactly end well.

He’ll face one of those guys, Mayfield, when his team plays the Cleveland Browns in 2019 during Week 15 on December 15th — and things could get pretty interesting when that happens.

In 2013, Mayfield walked on at Texas Tech, and earned the starting job in Tech’s season opener. The Red Raiders beat SMU 41-23 and then went on to win their next four games. On Oct. 5, Mayfield was 5-0 and had thrown almost 1,500 yards when he suffered a leg injury against Kansas.

Then, Kingsbury had to make do without him. The Red Raiders went 2-5 with five straight losses to close out the season. Mayfield came back In November, but has stated that after his injury, he didn’t have much communication with Kingsbury.

“When I got hurt, there was no communication between me and my coach,” Mayfield told ESPN. “When I got healthy, I didn’t know why I wasn’t playing right away. At that time, we were losing a couple games in a row. I was still clueless as to why I wasn’t playing. That was really frustrating for me because I started the first five games and we won. So, I just didn’t really know exactly what he was thinking or what the situation was.”

December of that same year, Mayfield announced he was transferring after stating Texas Tech hadn’t offered him a scholarship for the spring semester. Kingsbury denied that claim.

“I know a lot has come from Baker’s side, but I loved coaching him, loved the chip on his shoulder, cheered for him in every game except one,” Kingsbury said in July 2016. “It’s been fun to see the success he’s had.”

He transferred to Oklahoma, but was held up by Tech:

Mayfield ended up not being able to play at the rival Big 12 school right away:

There are two relevant rules to know here. One is the NCAA’s, and one is the Big 12’s. The NCAA’s says that players who transfer, if they haven’t already graduated, must sit out a year before returning to game action. That “academic year in residence” is a redshirt season, so players get an extra season tacked on at the end of their careers.

But the Big 12 has a rule that if players transfer within the conference, they lose that year of eligibility, in addition to having to sit out the season. That loss of eligibility could be waived by the player’s former school, but Tech denied Mayfield’s request to do that — and also, for a while, to let Oklahoma put Mayfield on scholarship.

Once Tech relented on that point, the NCAA let Oklahoma have an extra scholarship slot for Mayfield as he sat out 2014.

Luckily, the Big 12 made an exception to the one-year loss of eligibility if the player was a walk-on, so Mayfield got an extra year of eligibility. Eventually, he went on to earn the starting job at OU for three seasons, and he flourished, winning the Heisman Trophy in 2017.

Mayfield faced Kingsbury’s Tech team in 2016, in a game that set NCAA record books on fire.

Oklahoma won 66-59 over TTU, and with Mahomes leading Tech’s offense their teams set the all-time Division I single-game yardage record with 1,708.

It wasn’t all friendly for Mayfield in Lubbock, though. They reportedly chanted “Fuck you, Baker!” at him during the game, and these were seen in the student section:

Seen a few of these shirts in the Texas Tech student section: pic.twitter.com/K0g5eCBHsx

“You’d like to stay above that,” Kingsbury said of the chants directed at Baker. “Obviously emotions come into play, and we love the charged atmosphere, but obviously it’s not what you want to be portraying for our university, in that stadium, for our program.”

In 2017, Mayfield’s Sooners beat Tech 49-27. The two haven’t seen too much of each other, but it looks like the two are friendly when they do:

Mayfield hasn’t said too much about Kingsbury in his NFL days. But he has had a notable beef with another former coach, Hue Jackson.

Mayfield was drafted No. 1 overall by the Cleveland Browns, and led them to a 7-9 season his rookie year after earning the starting job in Week 3. Jackson was fired by the Browns on Oct. 29, and shortly thereafter, he landed a gig on the Cincinnati Bengals coaching staff. Let’s just say Mayfield didn’t think too highly of this. When the Browns faced the Bengals in in November, Mayfield didn’t exactly warmly embrace his former head coach:

.@bakermayfield shared a word with his former head coach after the @Browns big win pic.twitter.com/sjAI3oLC4r

And after the Browns’ win, Mayfield was asked about the interaction between the two:

#Browns Baker Mayfield admitted he didn’t like Hue Jackson defecting to the #Bengals so soon. Gave him a chilly reception pic.twitter.com/hF480gMc7N

“Didn’t feel like talking to him,” Mayfield told reporters. “He was here trying to tell us to play for him. Then he goes to a team we play twice a year. That’s how I feel. We have people we believe in calling the plays now.”

‘Left Cleveland goes down to Cincinnati. I don’t know. That’s just somebody that’s in our locker room asking for us to play for him & then goes to a different team we play twice a year. Everybody can have their spin on it, but that’s how I feel.’

When the Browns beat the Bengals again in December, Mayfield had this epic stare down of Jackson:

The NFL fined Mayfield $10,026 for unsportsmanlike conduct for this gesture:

Okay I’m all in pic.twitter.com/KxGLtfLmFG

Mayfield and now permanent Browns head coach Freddie Kitchens played it coy when asked about it:

Mayfield, when asked about the gesture on Wednesday, said ‘Oh well, I didn’t so…’’ and trailed off.

“I honestly couldn’t tell you. I don’t know,’’ he said. “We have a lot of stuff within our locker room, within what we have going on in the offense, a lot of inside jokes. Who knows what it was?”

So you don’t know what I’m referring to?

“No, I try and stay off social media, so everything trending that you’re talking about … “

Mayfield’s game vs. Kingsbury might not have as much drama as the ones against Jackson. But it might!

We do know that the two have spoken months prior to the game, and all appears to be cordial for now:

#Browns Baker Mayfield said he chatted with his old coach Kliff Kingsbury at the Kentucky Derby, told him to take care of his guy Kyler Murray

Guess we’ll just have to see how it goes down when these two meet again!