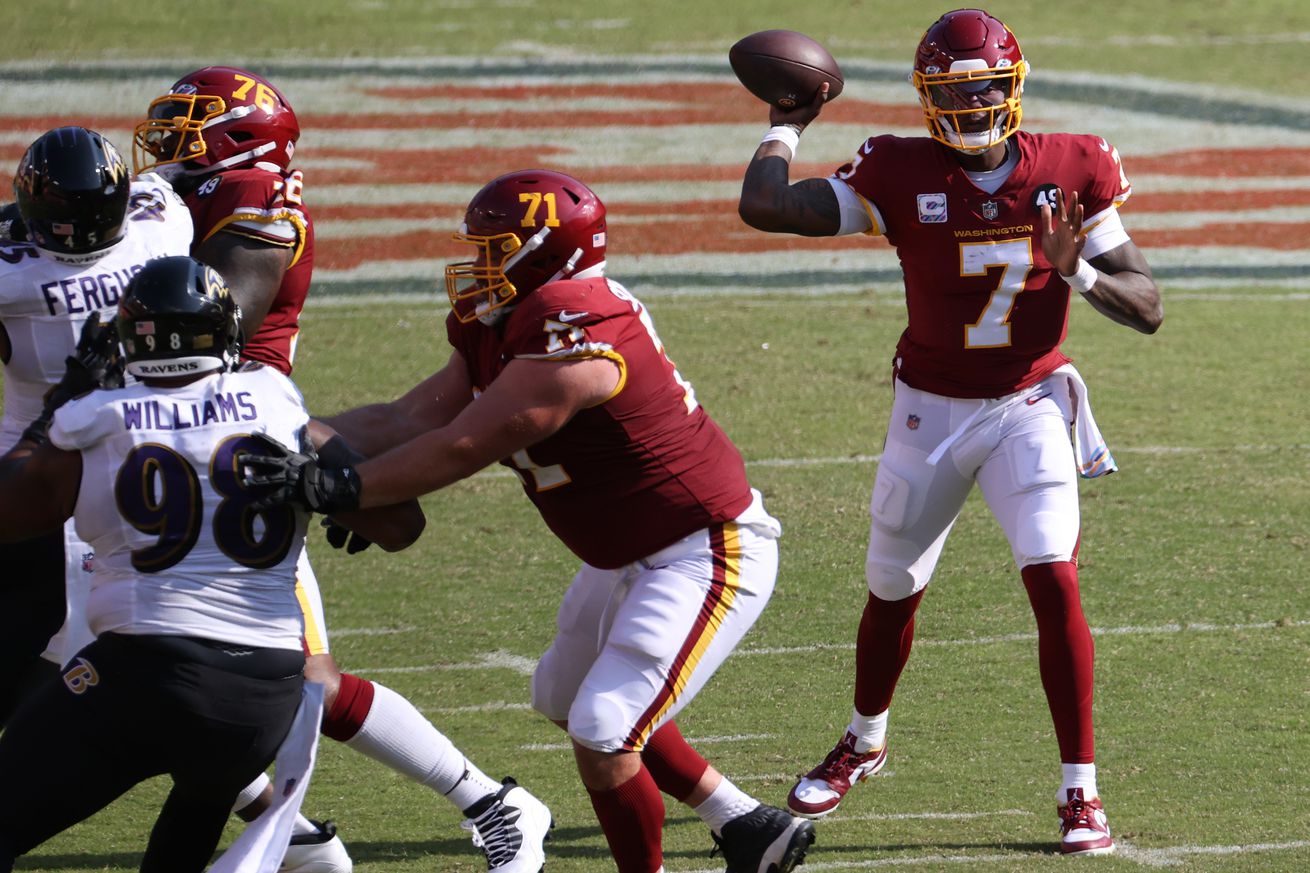 This decision makes little sense, and that’s par for the course for Washington.

On Wednesday the Washington Football Team announced it was benching quarterback Dwayne Haskins and moving forward with Kyle Allen. It’s a ridiculous decision that seemingly gives up on the player they look with the 15th pick in the 2019 draft, who only has 11 starts to his name, and trades the long-term future of the organization in favor of chasing ludicrous short-term gain, in a season where success would be largely meaningless. It’s the biggest misstep of Ron Rivera’s tenure as coach so far, and could speak to a quarterback change in 2021.

There’s not much to try and make sense of here, but we can intuit a few reasons why the Football Team would have made this decision, and where the team goes from here.

Haskins has been inconsistent in 2020, but that’s to be expected with a second year quarterback. That said, there have been flashes of excellence. His season opener against the Ravens, a top-tier defense was a breakout performance, and even without throwing a touchdown he showed the ability to play well in the NFL. Sure, there have been missteps too, like a terrible game against the Browns, but overall he’s been fine.

Prior to the benching he was on pace for 3,756 passing yards, 16 touchdowns and a rating of 80.3. It’s important not to act like this is amazing, but it’s progress.

Washington is devoid of weapons.

One of the clear reasons Haskins hasn’t excelled is the lack of talent around him on offense. The offensive line ranks 26th in sacks allows, giving up 3.2 a game — and outside of Terry McLaurin, the team really doesn’t have another solid receiver. The team banked on Logan Thomas to be the tight end this season, and it hasn’t paid off for them.

Given the conditions it would have been more than justifiable to give Haskins plenty of rope, but the team had other ideas.

Ron Rivera is making the switch to familiarity, with Allen who almost saved his last season in Carolina while Cam Newton was injured. However, despite his promising early run with the Panthers, it quickly became apparent that as defenses keyed in on his play style he couldn’t handle the pressure.

By the end of the season Allen finished with 3,322 passing yards and a rating of 80.0 — which, as you might note, is almost identical to the stats Haskins was posting before being benched. And that was with considerably more weapons that he’ll have now in Washington.

It’s unclear what Washington is even trying to gain here.

On a micro level it’s clear: The NFC East is a dumpster fire, and there’s plenty of room to sneak a few wins at potentially win the division. But what does that even achieve? Regardless of who comes out of the East they’re assured to be demolished in the Wild Card round, based on how teams are playing right now — which makes it a pyrrhic victory at best.

The cost to Washington is not embracing their role as a rebuilding team, instead being content with mediocrity. It will ensure the team doesn’t land a high enough draft pick to really help itself, Haskins won’t get the reps he needs to prove whether he can be “the guy” or not, and overall delay the inevitable, should the team need a new quarterback.

This reeks of desperation, and that’s sad.

In more ways than one this year was destined to be a full reset of a franchise, one that was desperate needed. It’s Ron Rivera’s first year at coach, so there’s room here for some middling results and failure, and that being okay. Fans will accept it as long as there’s some progress, and perhaps there’s no better progress than confirming whether their young quarterback can be a long term option.