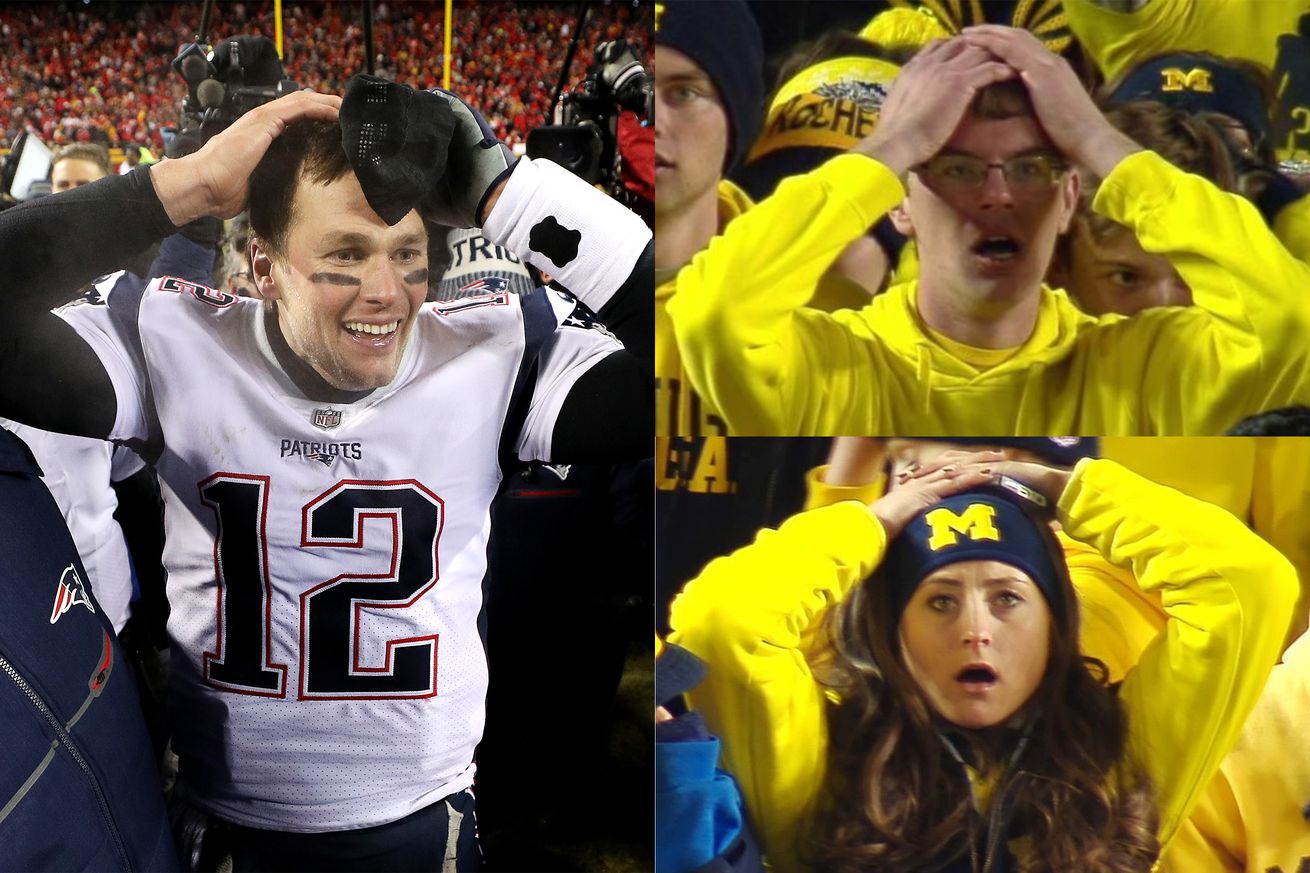 In crucial moments, the Michigan Wolverines have been everything Brady isn’t.

What do those have to do with each other? The QB who’s won all of these huge Patriots games used to play for Michigan.

The Wolverines didn’t always fall apart in tight games. In fact, Brady led several big comebacks as Michigan’s QB. Since he’s been gone, Michigan’s fallen flat over and over, while Brady has piled up great (and lucky) moments more consistently than anyone else in his league.

The new QB beat the Raiders in the playoffs after getting two of the luckiest breaks in NFL history:

The Patriots then beat the Steelers in the AFC Championship, 24-17. New England got two special teams touchdowns. One was on a blocked field goal return after the Patriots made an illegal forward pass. The Steelers, though, were out of challenges, and this was before the NFL automatically reviewed every scoring play.

The Patriots then won the Super Bowl on a 48-yard Vinatieri field goal at the buzzer. Brady only threw for 145 yards and a touchdown, but got his first ring anyway.

The Wolverines went 2-3 in one-score games that year, including several upsets.

Led seven game-winning drives, still the most of his career per Sports Reference, including four fourth-quarter comebacks. One came in the Super Bowl after Carolina kicker John Kasay sent a kickoff flying out of bounds late to give Brady excellent field position. He used it to set up a Vinatieri winning field goal.

In the Super Bowl, he led the Patriots to a three-point win over a team with a one-legged star receiver and an (allegedly) vomiting quarterback. New England played six one-score games and won five.

In Week 2, No. 8 Michigan lost to an unranked Notre Dame at home, giving up three touchdowns in the fourth quarter.

In the Rose Bowl, Michigan led Texas by 10 with 10 minutes left. Vince Young then led the second-most famous Pasadena comeback of his career, culminating with a winning Texas field goal as time expired. It was the second year in a row Lloyd Carr’s team lost the Rose Bowl as Brady’s won the Super Bowl.

His dramatic wins included another four fourth-quarter comebacks in 2007, including one in Week 17 against the Giants to cinch the first undefeated regular season since the 1972 Dolphins’. He also led two such comebacks in playoff games.

This was the worst postseason spell of Brady’s career. But even in losing two Super Bowls, he indisputably fared better in big moments than his alma mater did.

To start the 2007 season, Michigan lost the most famous upset in modern college football history to then-FCS team Appalachian State. Despite the Wolverines playing poorly all game, they had a great chance to win on a 37-yard field goal at the buzzer. It got blocked.

In 2015, Michigan was on the bad end of the most shocking ending in modern college football history. Leading Michigan State by 2 with 10 seconds left and about to hit a clock-killing punt from around midfield, a bad snap led to the punter trying to pick the ball up and punt it anyway, when falling on it probably still would’ve led to a Michigan win.

It bounced around for a while, continuing in the direction of Michigan’s goal line, until it bounced perfectly into the hands of MSU’s Jalen Watts-Jackson, who didn’t get caught.

These things happen to everyone at one point or another. It just seems like they only happen to Michigan, and in crucial moments.

He conducted four more fourth-quarter comebacks, all of them in December or later, including one in the Super Bowl. The game ended with Pete Carroll — who’d previously beaten Michigan at the Rose Bowl — deciding not to just hand off to Marshawn Lynch on the goal line, and Malcolm Butler intercepting a slant to give Brady his fourth ring. It was the most potent cocktail yet of Brady being a) extremely clutch and b) extremely lucky.

Michigan went 2-2 in one-score games, with losses to Maryland and Rutgers.

This was the score, at one point, of a Super Bowl Brady won:

Brady won MVP, but also needed tons of luck: the Falcons weirdly going away from the run with a multi-possession lead late in the game, Brady’s defense getting a big takeaway to kick off the comeback, an impossible Julian Edelman catch on New England’s tying drive, and New England winning the coin flip in OT, just to name a few things.

The Wolverines needed to beat Ohio State to lock in a Big Ten Championship berth, which probably would’ve led to a Playoff berth. On a fourth down in overtime, with Michigan up 3 and OSU needing to convert to stay alive, the Wolverines appeared to have QB J.T. Barrett corralled in the backfield.

Barrett charged toward the first-down marker and got tackled basically right at it. Officials gave him the spot, and OSU scored the winning TD on the next play. The Barrett spot was Zaprudered a million times over. It was probably correct.

Michigan then lost a dramatic Orange Bowl for good measure.

The Patriots beat the Chiefs in the AFC Championship because a dude wearing a red jersey lined up on the wrong side of the line of scrimmage. Then Brady won the Super Bowl while only scoring 13 points, thanks to his defense only allowing three.

The year started with Michigan losing a College GameDay primetime game to Notre Dame. The teams had similar box scores. Michigan fumbled away a tying drive in the final seconds.

After that, UM at least ended a 17-game road losing streak against ranked teams that went back to 2006’s Ohio State loss. But the Wolverines had what was supposed to be their best chance in years to beat Ohio State, and it ended with giving up 62 points.

Again for good measure, Jim Harbaugh’s team laid an egg in the Peach Bowl against Florida.