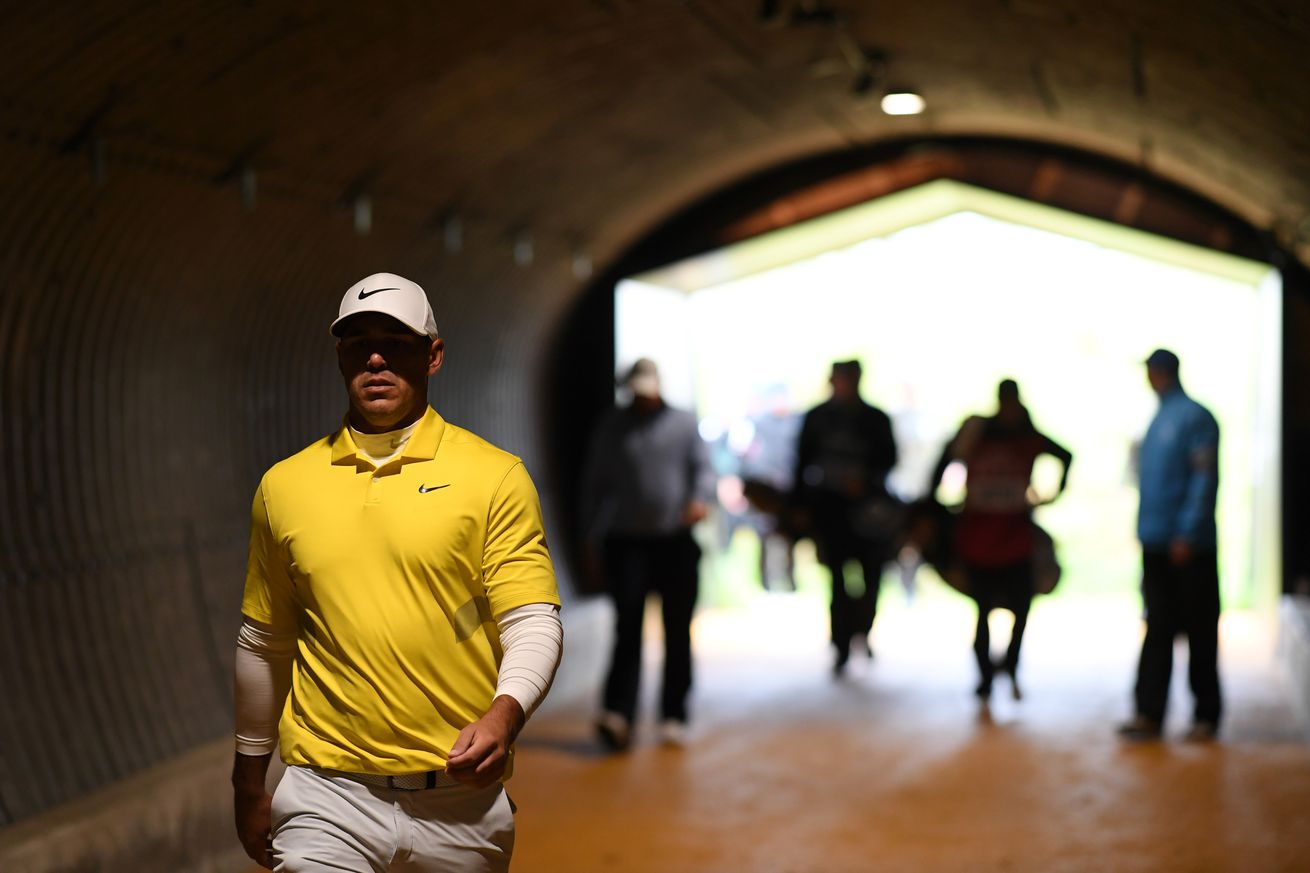 Brooks Koepka played one of his worst major rounds of the year on Sunday, but it was what he did in between the shots that had us cheering.

Even in defeat, Brooks Koepka won our hearts and minds on Sunday at the British Open. That’s a line usually reserved for the mawkish TV essay about an athlete’s class or heart. In this instance, it’s just a reference to Koepka discarding the delicacies of playing golf with a colleague. Koepka’s DGAF-ness has always been an element to his approach, but as he’s risen to the top of the game and won four major championships, he’s become much more comfortable speaking on it. He does not care for other players’ sensitivities or some unwritten gentlemanly traditions of the game.

Koepka is in a place where he feels he can call out other players for slow play or “acting like a child,” as he characterized Sergio Garcia earlier in the year. So when the Sunday tee sheet came out and we saw that Koepka was paired up with J.B. Holmes, the potential for discord or a bothered Brooksy increased significantly.

Holmes is an egregiously slow player. Everyone on Tour knows this. The TV coverage knows it. The hundreds of golf watchers tweeting angrily know it. And he’s not some sneaky slow player. It’s conspicuous and excruciating.

It started from the very first tee on Sunday, where, amazingly, Holmes was not sure what club to hit. He hit second after Koepka, and 58 seconds elapsed from the moment the first tee announcer finished belting his name and his iron striking the ball. Koepka took 23 seconds. NBC announcer Paul Azinger, who has a fondness for Holmes going back to their 2008 Ryder Cup win, added, “He had to have known what club he was going to hit for 23 hours!” But Holmes dragged it out before a double cross yank sailed way left out of bounds. Hitting two off the first tee was certainly not going to speed up play, but Holmes added to the duration by then changing clubs for the second tee shot.

The first tee false start set the tone for the entire day. Holmes had not even gotten to his interminable plumb-bob procedure and Koepka was likely already out of patience. But then Brooksy started with four straight bogeys and any small reservoir for abiding Holmes’ pace ran dry. There was this short film, lasting four seconds but with a protagonist and antagonist, a beginning, middle, and plumb-bob pay-off at the end.

Apparently, Koepka’s disgust at the plumb-bob prince went beyond just outward reactions. He also got the rules officials involved as well, pointing at a make-believe watch, according to Will Gray of Golf Channel.

Walking off 12 green, Koepka stares at an official and points to his non-existent watch.

This is just not a wall that comes down often in pro golf, where a player is actively agitating for the rules official to do something about his playing partner. The players are typically working together and partnering up against the rules official.

After the round, Koepka addressed the pace and tried to convey his trouble with it in an objective way. “I’m ready to go most of the time,” he said. “That’s what I don’t understand when it’s your turn to hit, your glove is not on, then you start thinking about it, that’s where the problem lies. It’s not that he takes that long. He doesn’t do anything until his turn. That’s the frustrating part. But he’s not the only one that does it out here.”

He’s not getting at some subjective “feel” part of playing a shot that varies from player to player. He’s getting at the nuts and bolts that every single player can do no matter their process of playing a shot. Get your glove on and be ready to go. Holmes seems to have particular trouble with this and it turned his win at one of the PGA Tour’s best and most pleasing-to-watch events, the Genesis Open at Riviera, into a slog earlier this year.

So walking off greens and mimicking a watch may seem outside the customary treatment of a pro golf colleague, but it’s for the greater good here. Koepka is now a leader in the game, beyond just his world No. 1 ranking. “If I’m in a group, we’re going to be on pace no matter what,” he said after the round. “I’m usually ready to go, as soon as the guy’s ball is coming down.” Whether intentional or not, he’s doing his part to mitigate a problem that degrades the watchability of his sport.

It did not help that Holmes needed 87 shots on Sunday to get into the clubhouse. The fact that he was alongside an irritated Koepka probably didn’t make it easier to play pressurized major championship golf in challenging weather. But playing golf in the allotted time you’re supposed to is a skill, as explained perfectly here. There are those that can do it better than others in the suggested time (40 seconds) and when you cannot do it as well, you should be negatively impacted. It puts those with the greater skill, those who can play the great shots in the time you’re supposed to, with their rhythm stifled and at a disadvantage. How backwards is that?

Brooks alluded to this incongruity at the start of the year when he panned the governing bodies for “not having the balls” the penalize slow play. “I think it’s weird how we have rules where we have to make sure it’s dropping from knee height or the caddie can’t be behind you and then they also have a rule where you have to hit it in 40 seconds, but that one’s not enforced,” he said. “You enforce some but you don’t enforce the others.”

PGA Tour rules official Slugger White recently said in an interview he won’t give out slow play penalties because he worries about the trickle-down effects it may have, like taking money out of a player’s pocket that could go to a meal (a fancy one no doubt) or kids’ school (a pricey private one most likely). Koepka’s actions on Sunday may seem cold, but changing the pace of play problem won’t be warmhearted. It will take open and harsh critiques of slow players and those that exacerbate the problem, including the PGA Tour officials and the governing bodies that run these majors and refuse to give out penalties. If penalties won’t be assessed, maybe it will take their faster colleagues with lofty standing in the game, like Koepka, bringing pressure and shame on them.