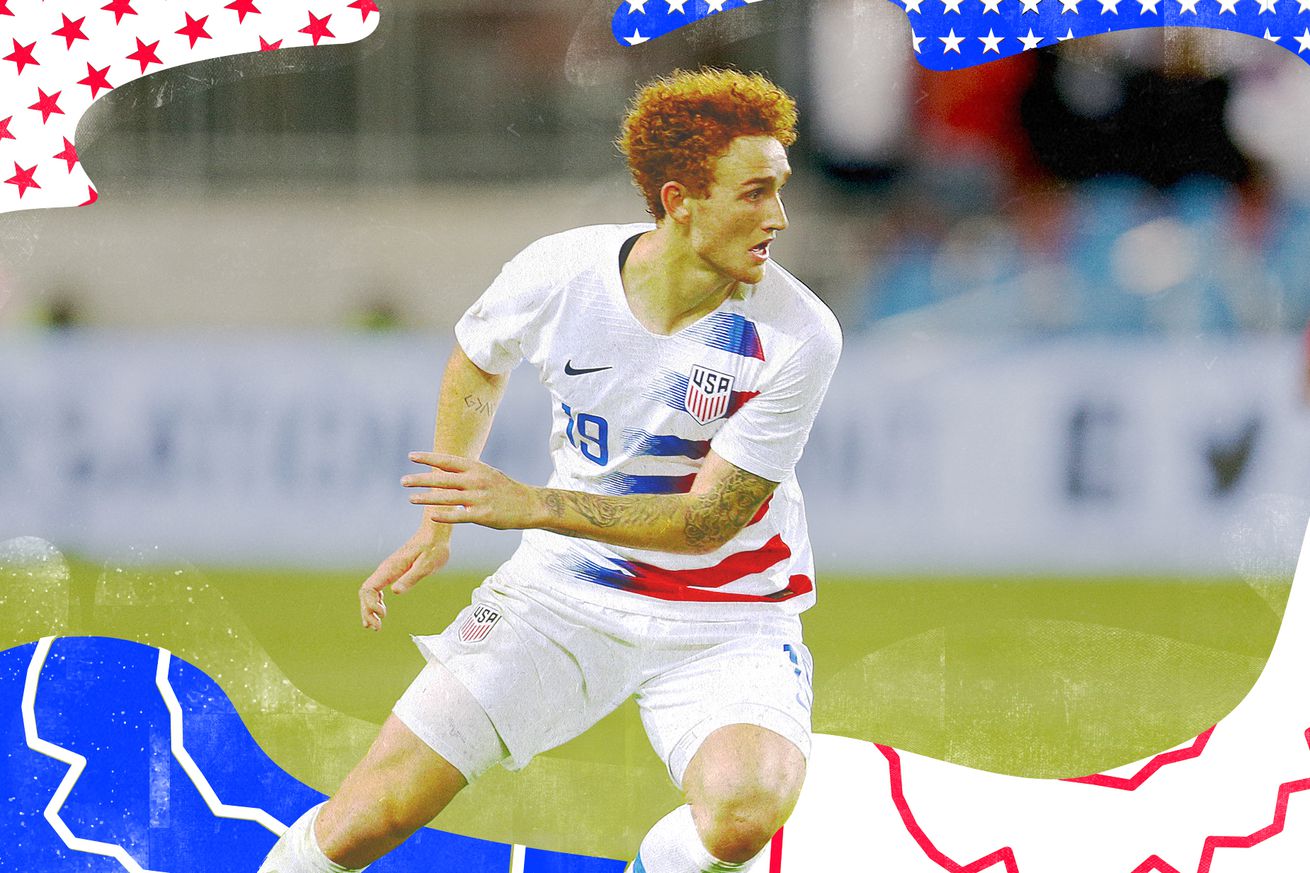 Things get stressful this week.

Welcome back to “Building a better USMNT together,” a series where I play Football Manager 20 to build the USMNT of our dreams with your help. If you’re new, start from the beginning here.

Last week, we qualified for the Olympics and won the CONCACAF Nations League. This week, we try our best to win an Olympic medal and play our first 2022 World Cup qualifying matches. It gets dramatic.

Tokyo did not treat us with hospitality

For the Olympics, we were drawn into a group with Nigeria, Jordan, and Germany. I knew we couldn’t count on getting anything in the last game, and that our subs could coast against Jordan, so the first game was the most important.

We got off to a slow start, but Weston McKennie put us on top with an absolute stunner.

And then we threw away the points in the 93rd minute when Nigeria were granted a penalty for… well, I don’t know. Even the game commentary thought it was bogus.

The match finished all knotted up, 1-1, and we were put into a position where we needed to put in a big performance against Germany to make it to the knockout rounds.

Things went as expected against Jordan, though we were thoroughly unimpressive. The ratio of shots to shots on target was not inspiring.

But incredibly, we got the result we needed against Germany to finish second in the group ahead of Nigeria. Suat Serdar helped us out with an early red card, and we returned the favor in the second half. The reds were the only two real highlights all game. It was a terrible match where nothing happened, which suited our needs perfectly.

The quarterfinal draw was not kind to us, and once again, we failed to put together any promising attacks. It looks like Argentina did us dirty with an 87th-minute goal in a game where shots were even, but they were the better team throughout, and our Olympics ended without us having put in a single impressive performance.

Given that I was able to bring pretty much our A-team to an Under-23 tournament, I was really disappointed by the performance. I’ve won a medal at the 2020 Olympics with the USMNT on FM before, and I almost always put in a better effort than this. The team just never clicked.

Here’s the Olympic dream team, in case you’re interested in how things are going in the rest of the world. Chucky Lozano making it while no Americans managed to sneak into the subs stings a bit.

I yelled several times in both joy and anger against Mexico

The draw for the Hex gave us a pair of extremely tricky games to start off — at home against Mexico and away to Costa Rica. While that’s a bit annoying, I went in knowing that if I got four points or more out of those two matches, we’d be strong favorites to qualify for the World Cup.

Before I had to finalize the squad, I finally got Folarin Balogun — who we have at Dallas on loan from Arsenal — to commit to the United States.

He’s going to be a star for us and gives us a different type of player to rotate with Josh Sargent. I really like Sargent’s combination play as a deep-lying forward, but Balogun is much faster and can play when we want a striker who runs in behind the opposing defense.

At home against Mexico, I wanted to play Sargent and Efrain Alvarez together. Tyler Adams and Weston McKennie were unavailable for the match through injury and suspension, respectively, so I thought a 4-2-3-1 formation suited our best available personnel. We lined up like this:

And we got off to an absolutely unbelievable start. First, Christian Pulisic obliterated the Mexico defense to set up Sargent for what turned into a tap-in, despite Guillermo Ochoa’s best efforts.

And we doubled our lead a few minutes later with a stunner from our left back, of all people. Look at this switch by Russell Canouse, playing in McKennie’s place, and a perfect hit by Dallas’ own Chris Gloster.

But we started to fall apart. El Tri pulled one back off a corner, then looked completely full of confidence for the rest of the first half. Hector Herrera scored the equalizer with this deflected effort, and in a flash, our lead was gone. We headed into the locker room tied up at 2-2.

At halftime, I felt the need to make a couple of changes. Canouse picked up a yellow card playing a ball-winning midfielder role, which makes players tackle harder by default. I wanted to have someone in that role who was able to play aggressively, so I took him out for Michael Bradley, who earned his first call-up in over a year due to McKennie and Adams’ absence. Antonee Robinson also replaced Gloster, who picked up a yellow and a minor knock. Otherwise, I didn’t change the tactics.

And seven minutes into the second half, Bradley and Robinson set up a go-ahead goal for Mexican-American teenager Efrain Alvarez, who was playing in his first competitive match for the senior national team.

I was in the middle of contemplating sticking with the tactics vs. going more conservative when this happened:

I didn’t even have the chance to finish my thought. Robinson did it again, setting up Sargent for the goal that should have sealed our victory.

We had to endure a dramatic finish, thanks to an absolute brain fart by John Brooks. WAKE UP, JOHN.

We ultimately did manage to hang onto the victory, though I imagine the stress I felt during the match did some lasting damage to my body.

The results from the first round of Hex games are largely what you’d expect in terms of points, though the actual scores are a bit wacky. Honduras got obliterated by Jamaica, who might actually be the third-best team in CONCACAF at this point.

And we got a big away result too

For the Costa Rica match I decided to switch things up, putting in Balogun and his Dallas teammate James Sands. Initially, I had Balogun playing as an advanced forward, Parks as a deep lying playmaker, and Canouse as a ball-winning midfielder. But Costa Rica was well on top in the first 15 minutes, and I decided to change the roles of those three players so they’d get closer together.

It worked. From the point I changed the roles, possession went 50-50, and Costa Rica stopped generating shots. We eventually got our winner by earning a phantom penalty that should have never been given, which I think we’ve earned given the Olympics and last episode’s George Bello incident.

Tim Weah scored from the spot, and we got our smash-and-grab victory away to Los Ticos. It wasn’t an impressive performance, but as anyone who’s followed the real-life USMNT will tell you, there’s no such thing as a bad win in Costa Rica.

Here’s the results from round two. With Honduras and Panama failing to win against each other, there’s a pretty clearly defined top four and bottom two in the six-team tournament. Us and Mexico are big favorites, while Jamaica and Costa Rica are battling it out for the last automatic qualifying spot and Honduras and Panama will need to improve significantly to have a chance at the fourth-place playoff.

An update on Dallas

Hey, we won the Supporters’ Shield!

I don’t consider this much of an accomplishment because, as I noted in a previous episode, the MLS AI is really bad. Other teams have released star players because they don’t know how to manage the cap, so we’ve basically been handed this trophy by default for managing our squad adequately.

We also experienced another fun MLS bug this week: An all-star squad with no goalkeepers.

I’m not going to lie to you, I just simmed the game and let them lose.

On the next episode, we’ll play the MLS Cup Playoffs, say goodbye to FC Dallas, and reveal where we’ll be playing club ball in the future. I’m really looking forward to bringing a ton of young Americans to Europe.