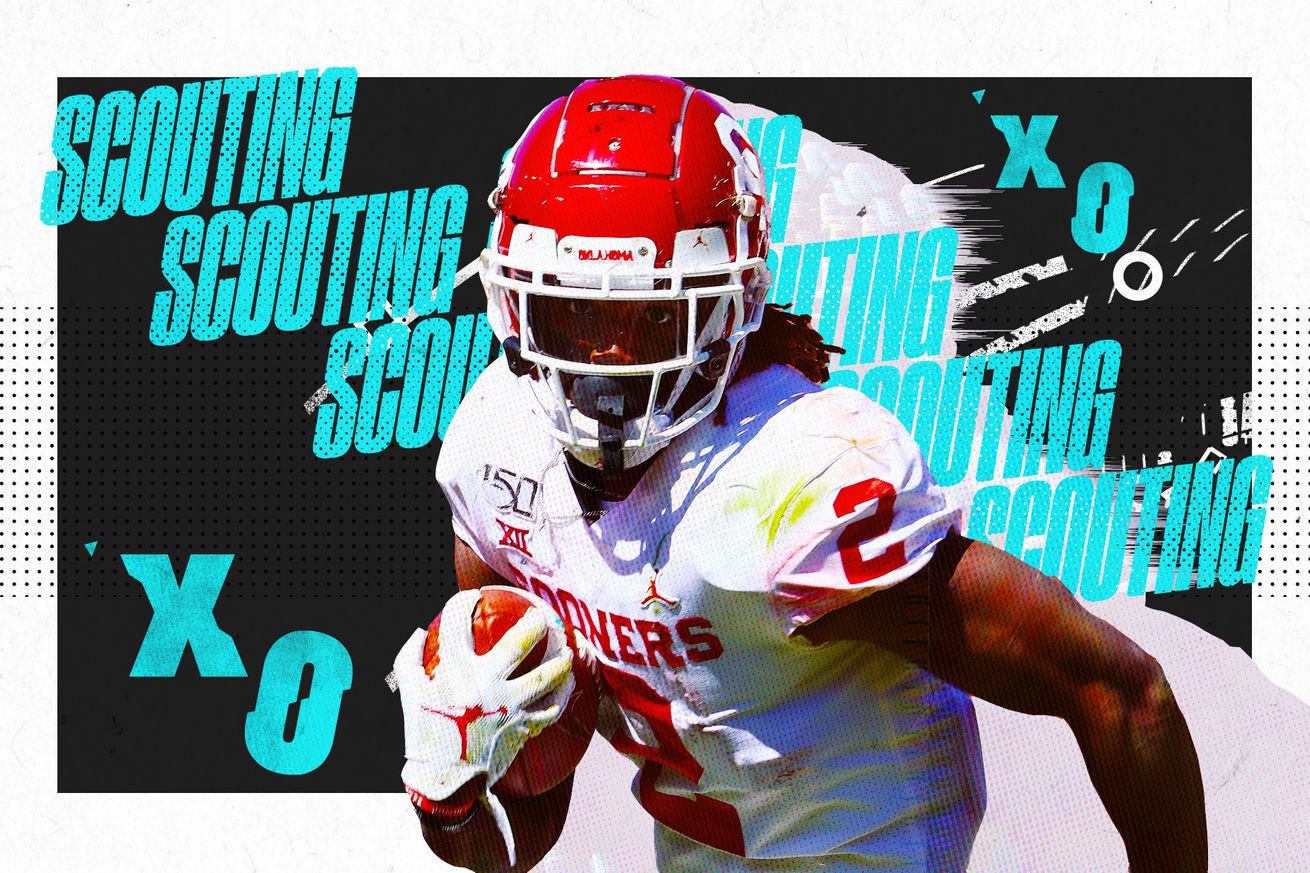 CeeDee Lamb should be one of the first WRs drafted in 2020.

Retired defensive end Stephen White shows why CeeDee Lamb has a bright future, even if the receiver isn’t a finished product.

It’s impossible for me to avoid comparing CeeDee Lamb to Jerry Jeudy. I would say that even if Jeudy hadn’t been the only receiver I’ve done a breakdown on to this point. They are two of the top receiver prospects in this year’s draft, and there are many similarities between them.

Lamb and Jeudy “look” the same, with both guys measuring in at a little over 6’1 and weighing over 190 pounds. They were both used in a multitude of ways in their respective offenses — Jeudy at Alabama, Lamb at Oklahoma — this past season. I saw them both running a bunch of shallow crossers, quick outs, quick slants, jet sweeps, and a ton of screens from both out wide and in the slot. They also both showed big-play potential, although the way they made those big plays often diverged.

However, this isn’t a compare and contrast column, especially since Lamb is a big-time baller in his own right. Instead, I will just give you the lowdown on Lamb as I did with Jeudy, and then you can do the comparing and contrasting on your own.

What Lamb does well: Breaking ankles

Let’s start with the fact Lamb can make you miss in a phone booth. Any young whippersnappers reading this may have to google what a phone booth is, but trust me, you’ll get it after you do.

There are some guys who can just see running lanes develop down the field that almost nobody else can, and Lamb definitely falls into that category. It didn’t really matter what kind of pass he caught or where he was at on the field, if he got the ball with any space to maneuver, it was showtime.

In the four games I watched of his, I saw a bunch of dudes who might need new ankles after trying to tackle Lamb out in the open space. He has that ability to stick his foot in the ground and change directions on a dime, then give you 10 pennies back just before the defender is set to make contact. That’s something guys have or they don’t. And Lamb was always looking to make a guy miss.

Watching Lamb dart through secondaries for big yardage actually reminded me of Dante Hall returning kicks back in the day. In particular, there was this play that made me stand up and holler. Lamb weaved in, out, around, and through traffic on his way to a long touchdown off a simple smoke screen.

You can’t teach that. You can’t coach that. That kind of elusiveness translates well to the next level, where we are seeing more short passes and screens to take advantage on the outside. That is especially true when you are talking about a guy who was making these kinds of moves against top-notch competition.

What Lamb does well: He’s tough to bring down

Another big selling point on Lamb is that he is a stronger runner with the ball in his hands than he looks.

Part of the reason he was so good at making big plays out of short passes is that he was able to keep his balance and stay upright when defenders tried to blast him, but didn’t wrap up. He actually reminds me a lot of Texans All-Pro receiver DeAndre Hopkins. The way Lamb keeps working through contact is going to pay huge dividends in the NFL.

I saw Lamb get blasted a few times right after making a catch, but he was always able to maintain possession while going to the ground. That, along with his strong running style, gives me plenty of confidence in him being a “tough” guy.

While the jukes and spins are going to get the crowd going, some of those 5-yard gains on third-and-4 are likely to be a part of his hallmark in the league, as well.

Another plus in Lamb’s favor is that he has a great feel for how to run routes, especially against zone coverage. He knew how to navigate through traffic to get to the open windows and make himself available. When you run those shallow- to medium-depth crossing routes, there are always linebackers and safeties in that area looking to give you the business.

I was actually able to see Lamb work around those “hole” defenders, either avoid the contact or weather it, then find an open window to sit down in. That isn’t something you see from many college receivers.

Watching the tape, it’s clear that Lamb is fast, as his 4.5-second 40-yard dash at the combine showed. But while Jeudy’s time was only .05 faster, their speeds on the field look much different to me. Jeudy got open deep consistently, but Lamb didn’t seem to get a lot of separation when he was targeted on downfield throws.

This was something that was consistent in all four games. The only contested bomb Lamb caught where the ball travelled more than 20 yards in the air was against LSU.

He did have another long touchdown on a completely busted coverage against Houston, too. Otherwise, his targets on go routes were mostly either bad throws, balls that fell incomplete but would’ve taken an outstanding catch, or in one case a drop.

And that brings me to my only real concern with Lamb after watching his tape: his ability to make contested catches on 50-50 balls.

I already said in Jeudy’s breakdown that it wasn’t much a concern with him because I’d expect him to have enough downfield separation on most of those throws. With Lamb, I saw him run deep routes against corners and safeties, and pretty much every time when the ball arrived, the defender was right there to try to make a play on it or to distract him enough so he couldn’t catch it.

I thought Lamb showed good-to-great hands in almost every other kind of situation over those four games. He went up high and caught several balls with his hands, and he caught several others while in traffic. However, it seemed like trying to catch those contested fades were just a different animal for him. And he’s not tall like Mike Evans, who can just sky over a defensive back to get it.

I think it’s an area Lamb can improve on to be a deep threat in the league. Like I said, his hands look really good otherwise, so it’s probably just a matter of working on his concentration. If he gets to where he can catch like Hopkins in those contested situations, or even come close, Lamb is going to be hell to try to defend.

I do think it’s something he can certainly do.

I do see Lamb as a high first-round talent. However, after watching DK Metcalf and A.J. Brown last until near the end of the second round last year, I’m not sure if anybody actually knows what a first-rounder actually looks like anymore.

I will note that like Brown and Metcalf, I didn’t see Lamb run an extensive route tree in those four games. It was mostly 5-yard breaking routes, shallow crossers, deep over routes (which seemed to be his specialty), and various versions of deep balls.

I will put the disclaimer that watching the TV copy means I’m usually at the mercy of whether the broadcast showed a replay angle of his route. Still, as far as I could tell, Lamb’s route tree itself was pretty basic. But, just like with Metcalf and Brown, I’ve seen enough of Lamb athletically that I don’t think teaching him how to run a deep dig or out is going to be very hard. It’s not astrophysics.

With his quick feet and body control, I imagine Lamb will end up being one helluva route runner before it’s all said and done, anyway.

Lamb is a fantastic prospect, but there are some areas he needs to improve on to develop into a Pro Bowler, which is what you are looking for when you draft a guy high. I don’t think he will have a problem adjusting in the league, but I don’t think he’s a finished product yet.

Regardless, it would take a lot for him to fail as a pro. There are just too many things he does well, including blocking. I could definitely see him being an 80+ reception guy in an offense that emphasizes getting the ball into his hands quickly. And as I said earlier, when he gets the ball in his hands, that’s when the party really gets started.

What will be interesting to see if Jeudy or Lamb comes off the board first on draft day. Of course it will make for a lot of internet arguments for months and maybe years afterward, but I really believe both guys will be tremendous in the NFL, barring injury.

As an old sixth-round pick myself, I always like to remind people that it’s never where you start, but where you finish. The beauty is I think both guys can fit in just about any offensive system because of the different roles their college teams had them play. While I like Jeudy over Lamb right now today, there is no question that Lamb could overtake him in the league, and that’s the fun part for me.

Regardless, the future should be bright for both of these outstanding young men.

Be sure to check out my other scouting reports on Chase Young, Jerry Jeudy, Derrick Brown, Jedrick Wills Jr., and A.J. Epenesa.

For the purposes of this breakdown, I watched Lamb play against Houston, Kansas State, Baylor in the Big 12 Championship Game, and LSU in the College Football Playoff semifinal.