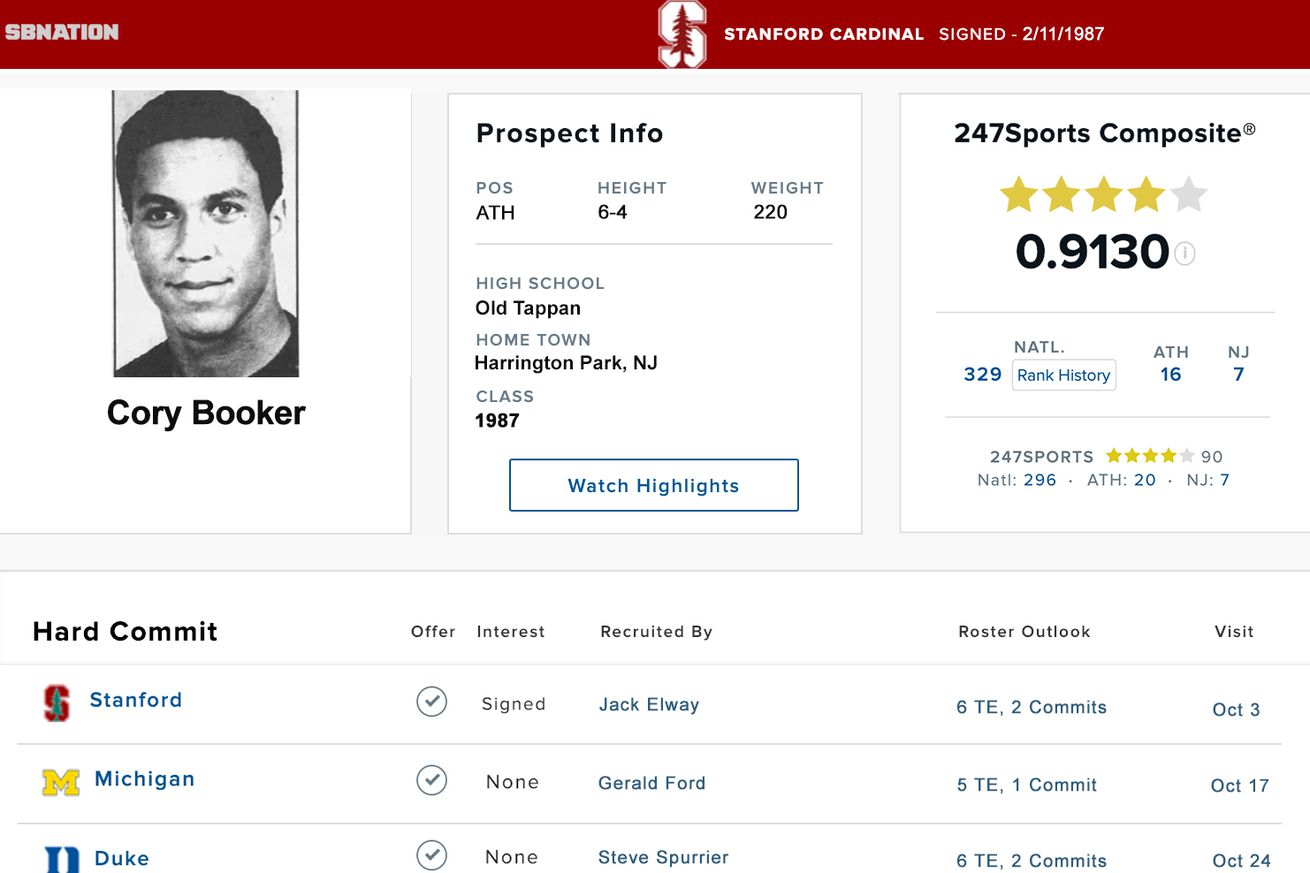 Steve Spurrier and Gerald Ford both reportedly wanted Booker to play for their teams. He picked Stanford instead, but he never developed into a star.

New Jersey U.S. Sen. Cory Booker is running for president. During his campaign, you’ll likely hear some about a part of Booker’s life he’s talked about occasionally since he’s been in public life: his football career, especially his time on the roster at Stanford from 1987-90.

Booker played football at Northern Valley Regional High School at Old Tappan (that’s the whole name) in New Jersey, where he saw reps at both defensive back and wide receiver/tight end. When Booker was there, he was a sought-after recruit.

If Booker were a recruit now, he’d probably be a four-star.

Booker didn’t play football until his freshman year of high school. As a senior in 1986, he was named the Gatorade New Jersey Football Player of the Year, and also earned a spot on the USA Today All-USA high school team as a defensive back. That year, he caught 46 passes for 589 yards and six touchdowns, and he made 53 solo tackles and nine interceptions as a safety. He was an AP all-state DB in high school, too.

Booker ended up signing with Stanford, where he played tight end. His decision was mostly focused on academics instead of football.

“I’ll never forget that that year, U.S. News & World Report academically ranked the colleges and they ranked Stanford over Harvard and Yale as the number one academic school in the country,” Booker has said. “That sealed it for me. I was like, ‘If I have a chance to get a football scholarship to the top academic school, I’m going to take that opportunity,’ because even back then, I realized that football was going to be my ticket and not my destination.”

Before he signed, his recruiters included Duke’s Steve Spurrier, Notre Dame’s Lou Holtz, and even former president Gerald Ford, who wanted Booker to play at his alma mater, Michigan. Because he played defensive back, receiver, and tight end, it’s fair to guess Booker would have been listed as an athlete as a recruit. He appears to have had serious offers from Michigan and Notre Dame, and he racked up accolades in a state that now produces a good number of blue-chips. Four stars seems reasonable.

Here’s Booker’s 247 page, which absolutely exists, and which we definitely did not make up in Photoshop and backfill ourselves:

He’d probably be a lower-ranked four-star, but typically the top 15 or so tight ends in a given recruiting class are four-stars, along with 20ish ATHs. You can’t prove a hypothetical, but Booker had a lot of markers of an eventual blue-chipper.

For a recruit, Booker apparently had a remarkable level of self-awareness. That turned out to be warranted, because he wasn’t that good in college.

If you think that’s too high, then you’re not alone. Booker called himself “the most overrated high school player in that year” and said that “opened up that door” to Stanford.

As far as how Booker actually played in college, he ended up with limited game time after redshirting as a freshman. Booker largely played on special teams, and likely due to his size, became a full-time tight end. But Booker’s best game as a member of the Cardinal was a four-catch, 47-yard outing during Stanford’s upset of then-No. 1 Notre Dame in 1990.

He caught 13 balls in total that year. One of the catches against the Irish included this wide-open grab with some pretty nice YAC.

And that’s not a backup DB whose ankles got broken. It’s Todd Lyght — a two time All-American and 12-year NFL vet. When you watch Booker on tape, you can see some of the wide receiver roots in this play, and in this one below. Here’s a pretty good catch in traffic:

If this is Booker’s claim to fame on the football field as a college player, it could be much worse.

The other stuff about Booker’s game is why he didn’t get on the field more and only recorded stats in 1989 and ‘90. His main problem was a lack of athleticism. The best tight ends have really good feet and move like they’re much smaller, but Booker plods. Both of those catches are as open as they are because they’re against zone coverage. If you matched up a linebacker on him man-to-man, it’d be a recipe for him to get shut down too often.

So, Booker’s like a lot of blue-chip college football recruits.

Stanford was down when Booker was there. The years he was on the roster, 1987 through 1990, were all sub-.500 seasons for the Cardinal, the first two under Jack Elway and the second two under Dennis Green. He didn’t produce big numbers. But he was a contributor to at least one huge win, and he got a Stanford education out of the deal.