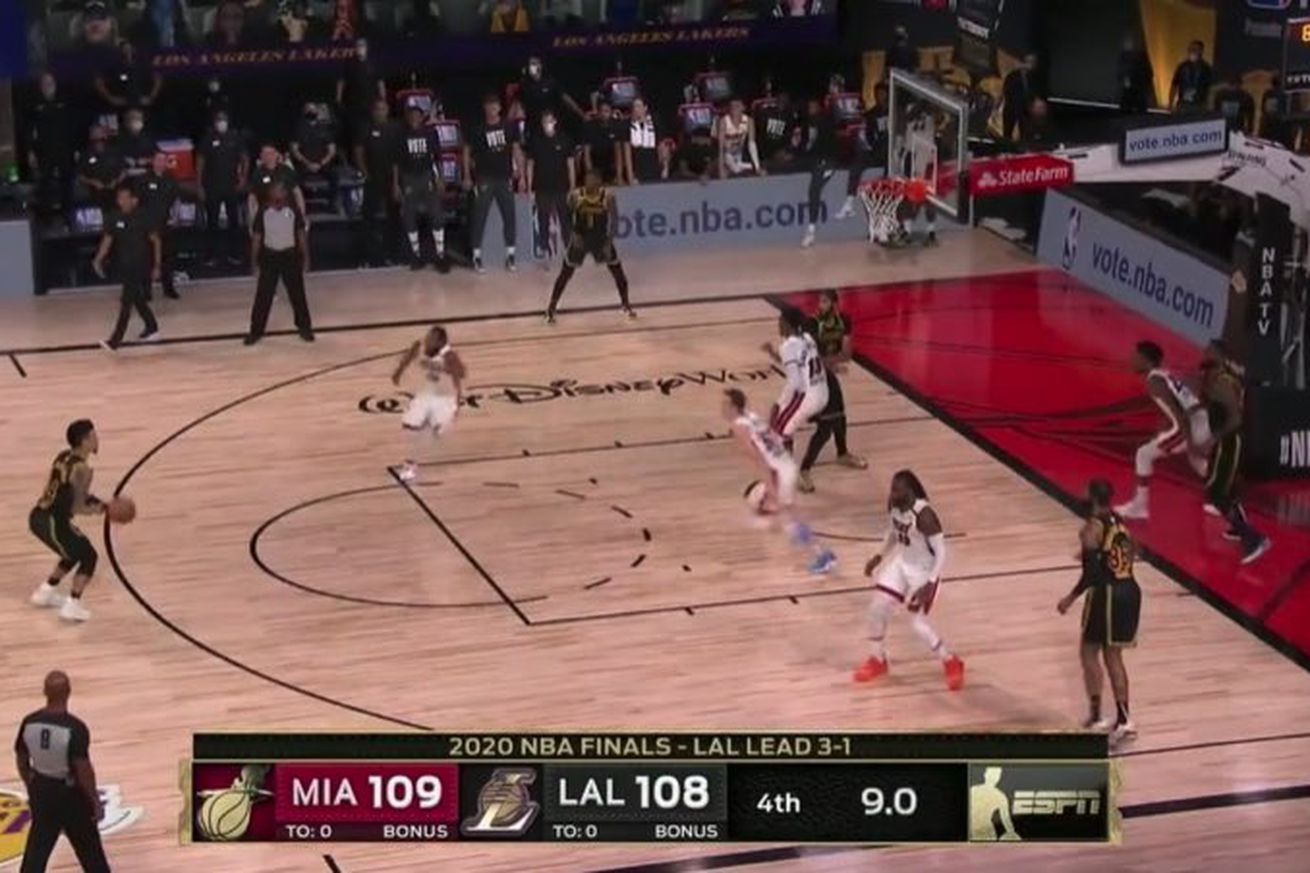 Danny Green was so open. He just missed.

The Miami Heat led the Los Angeles Lakers 109-108 in the closing seconds of Game 5 of the 2020 NBA Finals. As Jimmy Butler put the Heat in front with two free throws, the Lakers took a timeout to move the ball to halfcourt with one last chance to win the game.

LeBron James took the inbounds pass and was defended by Jimmy Butler. Lakers teammate Danny Green went to set a screen for James, and the Heat decided to double-team James with Green’s man Duncan Robinson. James kept his dribble and then found Green wide open at the top of the arc for a potential go-ahead three-pointer.

All Danny Green had to do was hit the shot to put the Lakers on the brink of their first NBA championship since 2010. He didn’t do it.

Look, Danny Green has a wide open look and LeBron is triple teamed. Morris has LeBron wide open too pic.twitter.com/O2xEAwDuN7

Lakers forward Markieff Morris corralled the offensive rebound off Green’s missed shot, but then turned the ball over as he tried to pass to Anthony Davis in the post. The Heat claimed a 111-108 victory to force Game 6 of the NBA Finals on Sunday.

LeBron made the right play to get Green the ball as he stood all alone at the arc. Green just has to hit that shot. Green otherwise played a decent game, scoring eight points and finishing as a game-high +12.

Here’s how wide open Green was when he caught the ball:

Even if Green made the shot, the Heat would have had plenty of time left to win the game. Either way, Miami has to consider itself so fortunate that Green bricked it.

James said after the game that he wished he could have made a better pass to Green. Even if the pass was slightly off the mark, James still created a wide open shot at the top of the arc for one of the Lakers’ best shooters. Yes, Green has been struggling mightily throughout the 2020 NBA Playoffs, but he’s only in the game at that point to hit that shot.

Here’s what James said when he was asked about the play after the game:

“I wish he could have it again. I wish I could make a better pass. But you just live with it.”

—LeBron James on the game-winning attempt by Danny Green pic.twitter.com/Ix4ejLcyPT

Green is shooting 33.3 percent from three-point range in the Lakers’ 20 playoff games so far this year. It’s been a disappointing stretch for him, but it’s important to remember he’s one of the best shooters in NBA Finals history. The shot just didn’t go in this time. It hasn’t been going in as much as he’d like since the Lakers arrived in the bubble.

Green and the Lakers are going to be thinking about this one for a while. Onward to Game 6.