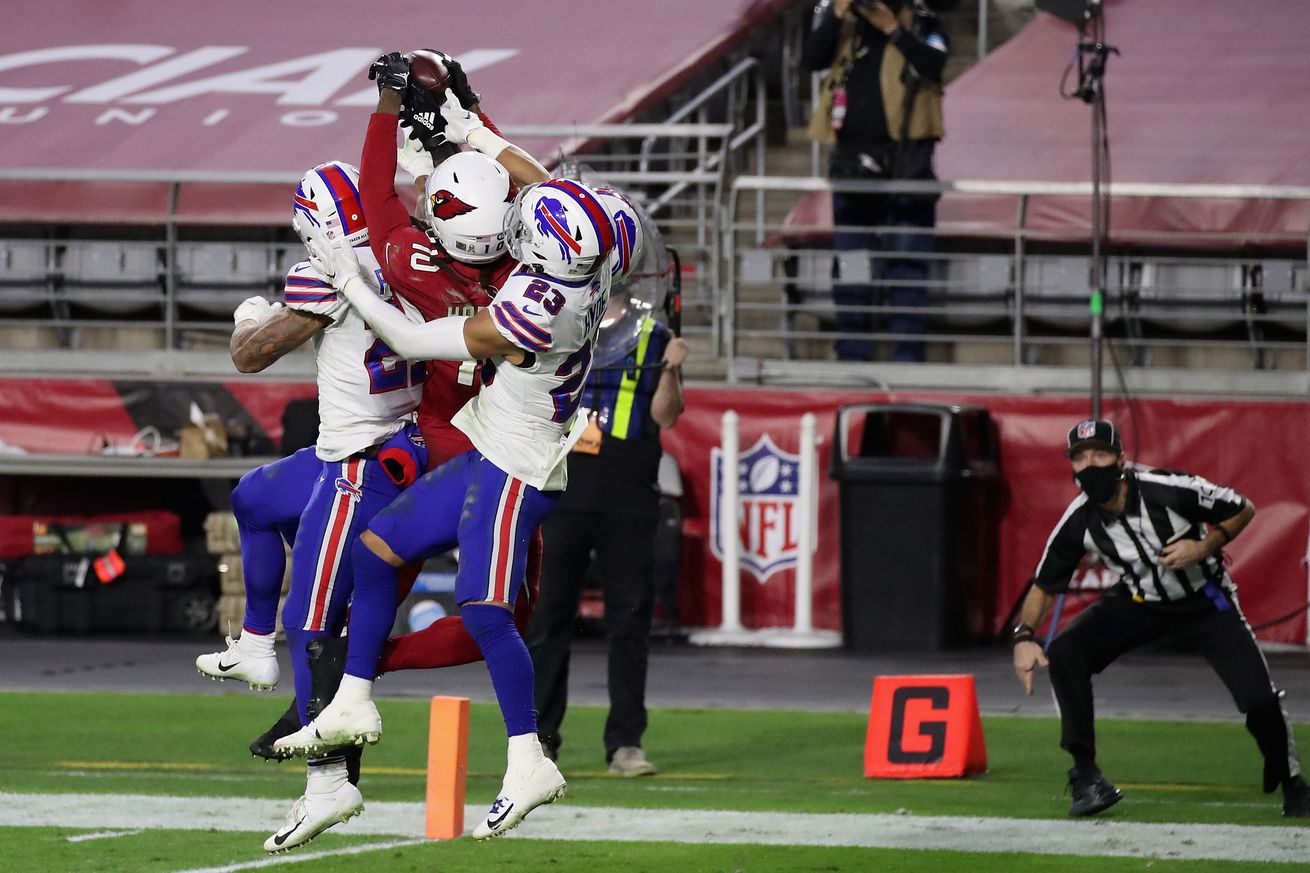 It’s the rare wide receiver who can make a Hail Mary catch feel inevitable. But Hopkins is a truly special player.

By now the image of DeAndre Hopkins rising up from the middle of a herd of Buffalo Bills to haul down Kyler Murray’s last-gasp pass has seared itself into our collective sports memory. There are plenty of Sports Moments upon which we might fixate ourselves. Some are impactful, some are beautiful, some are straightforwardly compelling. But few combine all three in such vivid color.

There’s the impact. All Hail Maries are important; one way or another they end the game. Usually, that’s in favor of the defense, but not always. Here Hopkins’ leap-and-grab turned a 30-26 Bills win into a 32-30 victory for the Arizona Cardinals. The result of the game, of course, matters more to Cardinals (and Bills) fans more than to the rest of us. If a play is going to become universally recognized as A Play, there has to be more too it.

Now the aesthetics come into play. There’s Murray’s scramble and bomb downfield, an eminently watchable quarterback being effortlessly athletic. He dodges a tackle from Mario Addison with the tiniest hip shimmy, a testament to his awareness, efficiency and focus. And then, with two Bills closing in, he turns his arm into some sort of medieval siege weapon. It’s pure violence, condensed down into his right arm and delivered downfield: Murray throws this ball so hard I’m pretty sure both of his feet left the ground upon release.

But Murray, however brilliant, serves as a mere backdrop to the real beauty of the play, which comes from DeAndre Hopkins. The throw was impressive, a perfectly-placed bomb, but the Bills defense was also perfectly placed to handle it. With perhaps any other receiver in the game, the Cardinals lose.

With Hopkins? They win, and they do it with style. Look at this catch!

It’s iconic. You could replace the Vince Lombardi Trophy with a sculpture of this catch and instantly have the best trophy in professional sports. The trio of Bills defenders are framing him perfectly, a metaphorical pedestal upon which to place Hopkins snatching the ball from the sky. Sports are mostly messy, but not here. Not only did Hopkins make and secure the catch, he did so in a way that made the whole process seem inevitable. Dexterity, strength and style fuse to create a moment of cinematic purity.

And then there’s the Hail Mary itself. Not this Hail Mary, but the lot of them, rolled up and considered as a whole. There’s something deeply human about the gambit, of putting everything — force, skill, luck — into one final roll of the dice. The ball is catapulted into the sky, disbelief suspended for as long as it arcs downfield. A Hail Mary is an act of desperation, sure, but it also builds and sustains hope for as long as the play develops.

It’s impossible to ignore the spiritual overtones invited by the name and reinforced by the act. Faith is, perhaps, not something that weighs heavily upon the everyday lives of most people, and perhaps one might prefer to frame the Hail Mary as an act of raw hope. But for the quarterback, the throw is and must be an act of faith, in whichever form you like it. The Hail Mary is a watered-down, footballing version of Pascal’s great Wager. We commit ourselves to faith and throw the ball; what have to lose?

‘Faith,’ however, is a layered word, and this catch evokes one of its secondary meanings: trust. With the ball in the air, DeAndre Hopkins is a man who inspires trust, a receiver a quarterback can put their faith in. The catch wasn’t inevitable, even for Hopkins, but the magic here is that he’s the sort of player who can make it seem so after the fact, and it’s that aura which left Murray looking for him and him alone downfield.

Here, abstract faith and abstract hope collide with the real, everyday trust between teammates and crystallize into a play which is both beautiful on its own merits and brutally impactful for the shape of the NFL season. Murray to Hopkins is the first successful Hail Mary in five years, but now that it’s happened there is a feeling of relentless destiny to the whole affair.

I try not to panic. I never panic when the ball is in the air. I stay calm. Being calm, going up, and doing what I do. With my hands, I know if I get my hands on the ball, I’m coming down with it.

I don’t think we were expecting to see Hopkins pull down a Hail Mary, but now that it’s happened it really does feel like a match made in heaven.