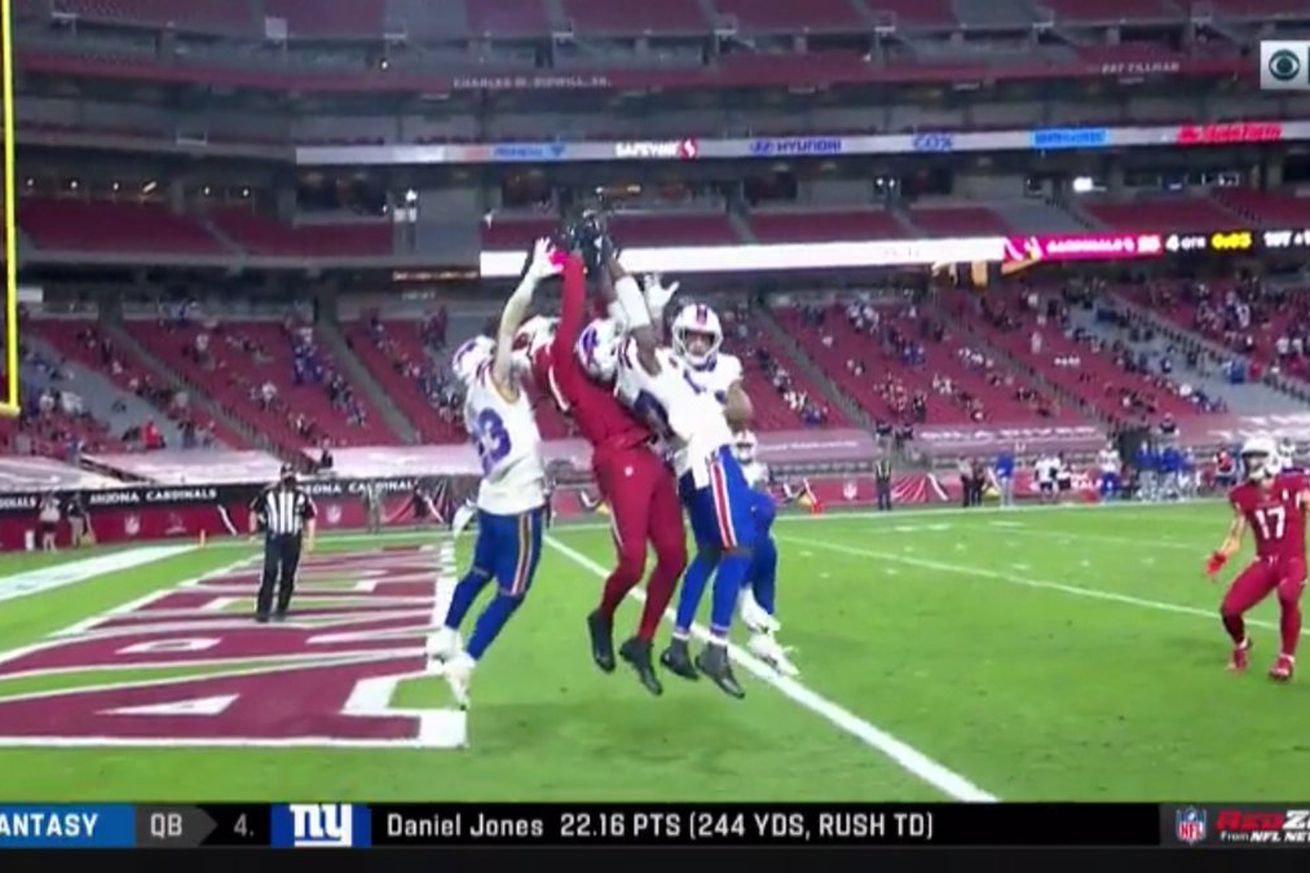 DeAndre Hopkins made a Superman catch in the end zone to beat the Bills.

The Arizona Cardinals were down to their final play against Buffalo Bills in Week 9.

After trailing 23-9 early in the second half, the Cardinals stormed back behind quarterback Kyler Murray to take the lead. Just when Arizona’s offense thought it had won the game, the defense let Buffalo march down the field and surrendered the go-ahead touchdown on a 12-play, 78-yard drive that ended in a Josh Allen strike to Stefon Diggs.

After the ensuing kickoff went for a touchback, the Cardinals were trailing by two points with 34 seconds left. Fortunately, Murray had a little more magic left. The QB launched a Hail Mary to DeAndre Hopkins, who made a spectacular catch to win the game between three Buffalo defenders.

You might not see a better ending all year:

This is an absolutely bonkers catch from Hopkins. There’s no better example of why he’s one of the best receivers in the world.

The alternate angle is even more impressive. This is the textbook definition of high-pointing the ball as a receiver.

EVERY ANGLE OF THE PLAY OF THE YEAR@DeAndreHopkins x #RedSea pic.twitter.com/KSc0g2CTlm

Even prime Randy Moss thinks this is incredible grab:

This is why you trade for DeAndre Hopkins

(and why you don’t trade him away ) pic.twitter.com/cesPQe27PO

The Bills did a decent job on the Murray-to-Hopkins connection throughout the afternoon, but the final play was all the Cards needed for the win. Murray finished 22-of-32 for 245 yards and also added a touchdown on the ground. Hopkins finished with seven catches for 127 yards and the game-winning score.

This was the first game-winning Hail Mary in the NFL since Aaron Rodgers threw this beauty against the Detroit Lions back in 2015:

Do you think the Texans regret trading Hopkins this offseason? The Clemson product is having a tremendous year, and it’s helped unlock Murray as one of the league’s brightest young QBs.

Cardinals fans are so lucky to be able to watch Murray and Hopkins for years to come.