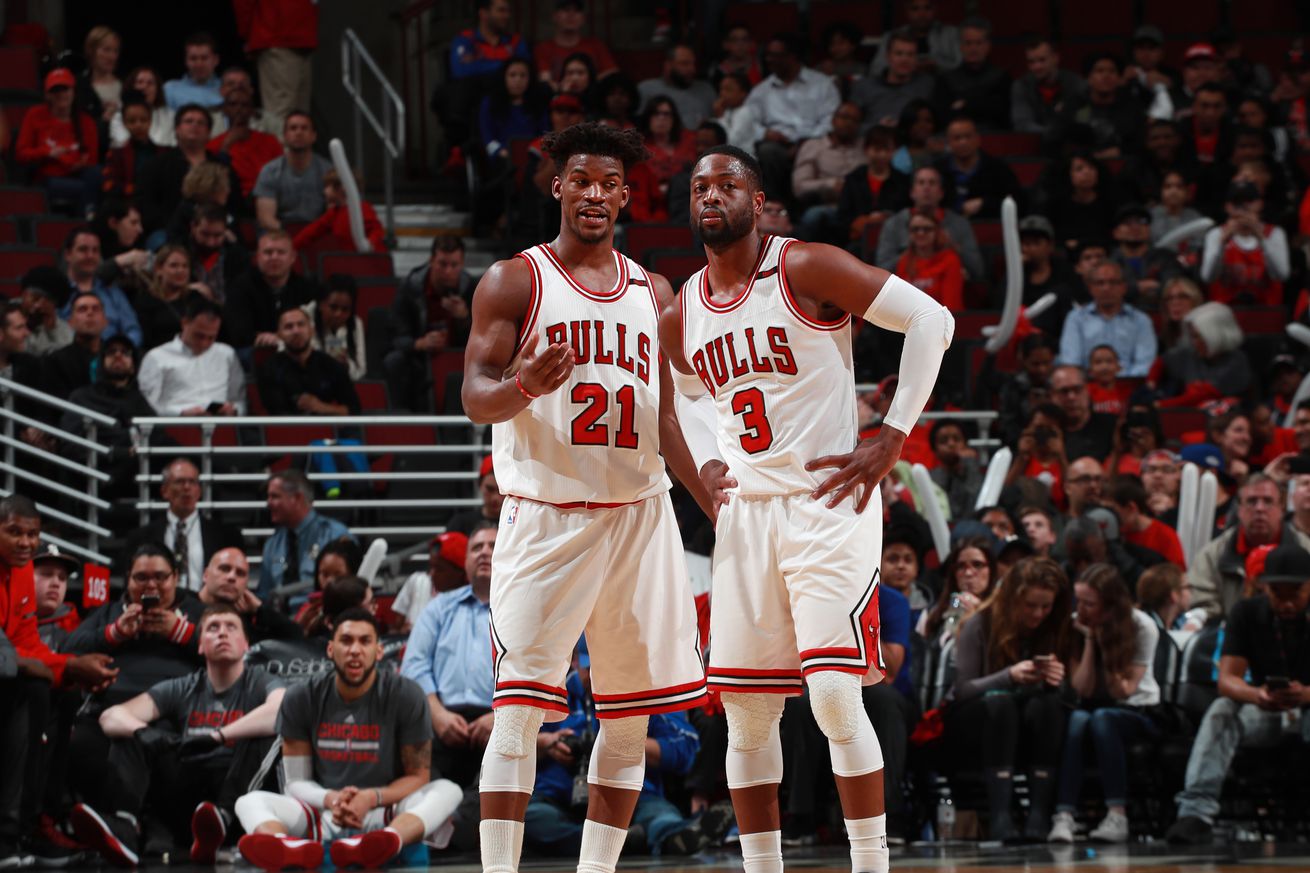 Behind the theory that Dwyane Wade helped convince Jimmy Butler to sign with the Heat during their season together in Chicago.

Did Dwyane Wade use his lone season with the Chicago Bulls to subtly help sell Jimmy Butler on the idea of one day joining the Miami Heat? While it sounds like a half-baked conspiracy theory, several media members have been connecting to the dots between Butler and Miami dating back to the Bulls’ 2016-2017 season, when Wade and Butler were both briefly teammates in Chicago.

The Bulls entered the summer of 2016 coming off a disappointing season that saw the team miss the playoffs in Fred Hoiberg’s first year as head coach. When the Bulls let Joakim Noah walk in free agency and then traded Derrick Rose to the New York Knicks, its front office promised a roster that would be ‘younger and more athletic’ around Butler. Instead, the Bulls signed 30-year-old Rajon Rondo to a two-year deal and then made a shocking move to sign Wade.

Most people around the league thought Wade would never leave Miami, but when Pat Riley refused to offer Wade the golden parachute contract he was looking for, the Bulls swooped in and signed him. Chicago gave Wade a two-year, $49 million deal with the second year as a player option. The Bulls’ decision to sign Rondo and Wade was immediately panned, and the critics were ultimately proven right: Chicago finished with the same 42-40 record as the year before and lost in the first round of the playoffs as the No. 8 seed in the Eastern Conference.

The Bulls would trade Butler to the Minnesota Timberwolves during the offseason, and have been one of the worst teams in the NBA ever since. Wade would agree to a buy-out and sign with the Cleveland Cavaliers before ultimately re-joining Miami. Butler signed a max deal with the Heat as a free agent in the summer of 2019, and has now taken them to the Eastern Conference Finals in his first year.

Blog-a-Bull writer Jason Patt has been suggesting that Wade was a sleeper agent for the Heat during his year with the Bulls. Patt cited this story in the Miami Herald as the first piece of evidence.

Wade knew Butler would flourish with the Heat dating back to their conversations as Bulls teammates. One example that Wade brought up when discussing what Butler was missing prior to signing with the Heat: Butler and Wade were fined by the Bulls and benched for the start of a game after they both made postgame comments questioning their teammates’ effort and commitment to winning in January 2017.

“The Heat say culture and we say culture all the time, but let’s talk about what that really means,” Wade said. “That’s what Jimmy was looking for, what he was missing. And that’s what we got fined for to just be honest. Me and Jimmy both got fined in Chicago because of holding guys accountable. It’s not about misses or makes, you know what I mean. It’s about caring about the game the same way we care about it. Not from the standpoint of not laughing or you got to cry after every game, it’s the way you perform. When you have a lead, it’s the way you hold onto a lead and how much you care about that. Stuff of that nature. So, he has that in Miami. He has the organization and it’s passed down to the players because they recruit players and bring in players who fit that same mold.”

This recent Zach Lowe story on ESPN again hints that Wade may have helped sell Butler on Miami during their one season together in Chicago.

During their season of overlap with the Chicago Bulls, Jimmy Butler once heard Dwyane Wade remark in the locker room about perhaps not having fully appreciated the Heat’s culture until he joined another NBA team for the first time, sources close to the matter said. That stuck with Butler.

As Butler moved from Chicago to the Minnesota Timberwolves to the Philadelphia 76ers, never satisfied anywhere, his agent, Bernie Lee, would often warn him: “There’s no utopia in the NBA. Every team has issues.”

“I’d always hear back: What about Miami?” Lee said. “I can only assume the person who had a locker near Jimmy for a year and who is in a picture with Jimmy that has been the home screen on Jimmy’s phone had something to do with that.”

(Representatives for Wade at CAA confirmed the two discussed team culture and Wade’s decision to move on from Miami during their shared time with the Bulls.)

On Tuesday, ESPN’s Nick Friedell — who covered the Bulls as a beat writer during the 2016-17 season — again suggested the idea that Wade showed Butler the Heat had everything those Chicago teams were lacking during their year together.

Today’s #ESPNDaily dives into the psyche of Jimmy Butler with @NickFriedell, who‘s covered Jimmy since 2011 in Chicago. Which is where Dwyane Wade emerged as a sleeper agent for #HeatCulture, planting seeds for Miami, while they were both Bulls… : https://t.co/TVYn0wx8Va pic.twitter.com/PItnzLvnBm

The incident referenced by Friedell happened after a loss to the Atlanta Hawks in Jan. of 2017 that put the Bulls two games under .500. Butler and Wade blasted their teammates after the game and were fined for it. Rondo, who had recently been taken out of the starting lineup for poor play, responded to Butler and Wade’s criticism on Instagram by writing a tribute to the veterans who helped him on the Boston Celtics early in his career.

The Bulls would eventually sneak into the playoffs as the final seed in the East and steal the first two games of the first round series against the top-seeded Celtics. Then Rondo fractured his thumb in Game 3 and Boston won the next four games to end the Bulls’ season. My ‘Bulls in six’ prediction was so close.

None of this is to suggest Wade ‘stole’ Butler from Chicago. The Bulls’ front office — finally replaced earlier this year after two decades of mismanagement — always seemed far more concerned about avoiding paying Butler his next contract than building around him. There were trade rumors circling around Butler a year before he was ultimately dealt. Butler was fantastic in his final season with the Bulls, but Chicago’s front office still thought he wasn’t good enough to lead the team. How foolish they look now.

Perhaps Butler was always destined to end up in Miami. Butler’s hard-charging style is a great fit for the Heat’s culture. Miami also built the same ‘younger and more athletic’ team around Butler that Chicago should have, nailing draft picks like Bam Adebayo and Tyler Herro, developing shooters like Duncan Robinson, and finding quality pieces on the trade market like Jae Crowder. Where the Bulls’ front office made so many mistakes that they felt like they had to trade Butler to start from scratch, Miami saw a two-way superstar in his prime and constructed a roster that could actually complement him.

Butler has been brilliant for Miami in his first season with the Heat, taking a team that was in the lottery last year to within a couple wins of the NBA Finals. The Bulls are finally starting fresh, now with Billy Donovan as the head coach. Butler’s other former teams — the Wolves and Philadelphia 76ers — also had disappointing seasons while Butler thrived.

The Bulls’ decision to sign Wade to a two-year deal was a short-sighted move from the very start. Little did they know it may have helped them put Butler in Miami.