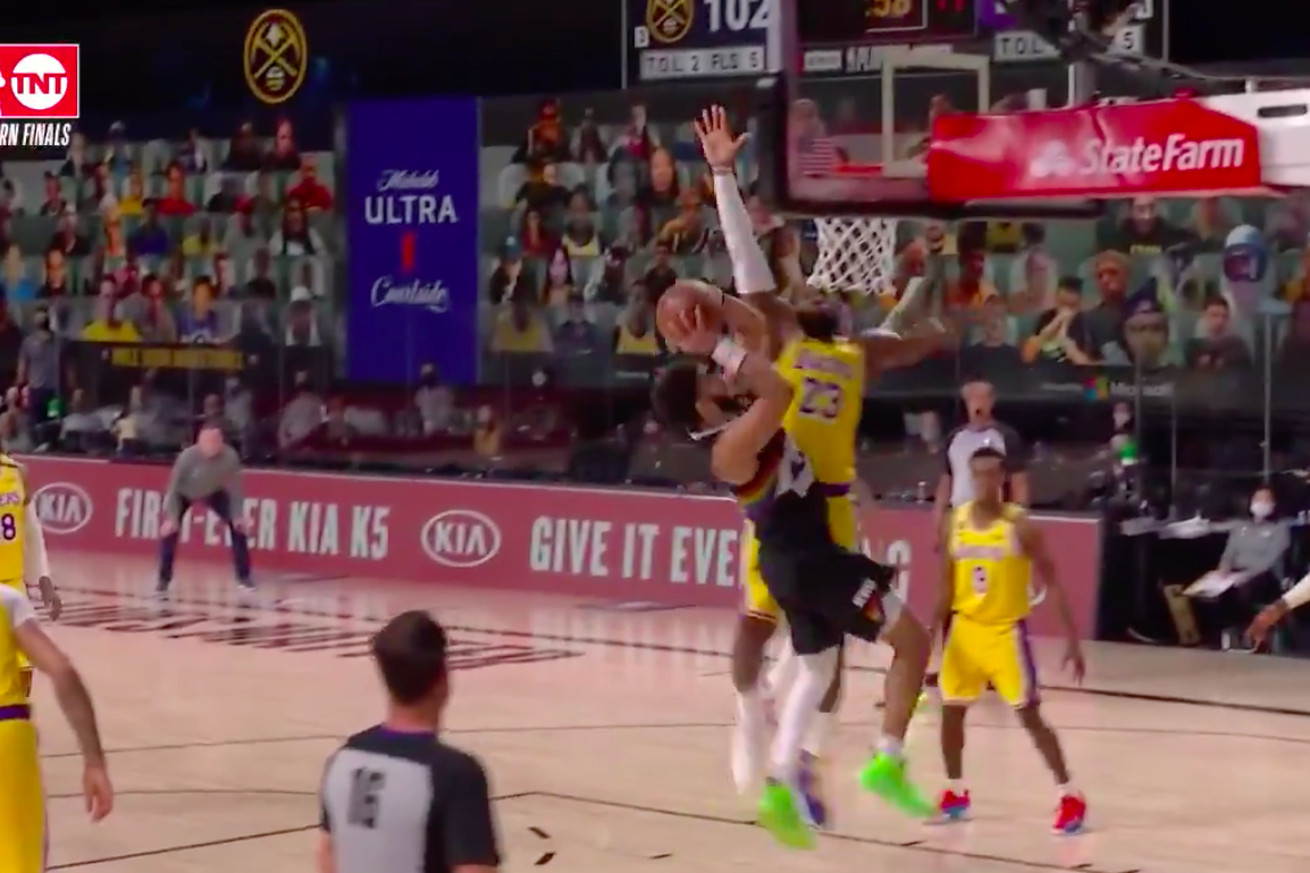 While LeBron got to the line more than ever, it was his non-calls while guarding Jamal Murray that stood out.

The Los Angeles Lakers drew headlines ahead of Game 4 of the Western Conference Finals when head coach Frank Vogel said his team had spoken to the NBA about LeBron James’ lack of free throws so far in the series. Through the first three against Denver, James had gone to the line just 10 times total.

“We’re dealing with the fouls through the proper channels with the league,” Vogel told reporters. “I think he’s gone to the basket very aggressively, and I’ll just leave it at that.”

It was easy for NBA fans around the league to roll their eyes in unison when they read that quote. Both LeBron and the Lakers have been perceived to get a favorable whistle from officials over the years. Whether there’s any truth to that remains up for debate, at least outside of the 2002 conference finals. It’s been clear that James had not been super aggressive attacking the basket through the first three games, which felt like a bigger reason he wasn’t going to the line rather than some grand conspiracy to rig the Finals for a mid-market team like the Denver Nuggets.

There were going to be eyes on the referees regardless of what happened in Game 4 after news of Vogel’s complaint made the rounds earlier in the day. It remains a talking point after the Lakers’ 114-108 win on Thursday night to take a commanding 3-1 series lead and put them one win away from a Finals trip.

Yes, LeBron got to the line more often, shooting more free throws in Game 4 (14) than he did in the first three games combined. Most of that is because James actually looked determined to get into the paint, and it’s not why the refs continue to be a subject of conversation the next day. Instead, there were several instances where the refs swallowed their whistles when it looked like Denver should have drawn a foul.

The most glaring moment came on this drive to the rim by Jamal Murray late in the fourth quarter. With three minutes left in a three-point game, James denied Murray at the basket and the Lakers used the stop to get a transition bucket going the other way.

Should that have been a foul on LeBron? It sure looked like it.

Such a clear and obvious foul by Lebron James on Jamal Murray. Really changed the game. Lakers go up 3-1 on the Nuggets. pic.twitter.com/n3o3J6pT7J

Draymond Green had a different explanation: that Murray didn’t yet have the reputation to get that call against LeBron in that moment.

He hasn’t earned that call against Bron in that moment ‍♂️ https://t.co/naE2fhPY1k

Of course, that’s a split-second judgement call by the refs and is hardly evidence of the pro-Lakers conspiracy. It also wasn’t the only call Denver fans were upset about.

Nuggets superstar center Nikola Jokic was in foul trouble late, and was pulled at one point in the fourth quarter after picking up his fifth foul. His fourth foul didn’t appear to be any fault of his own:

This was the problem foul on Jokić. AD pinned his arm and jerked, tricking the ref. Down the floor Jokić picked up another quick one on defense and then he sat with 5 fouls pic.twitter.com/SlPtIA2PwT

Here’s another instance late in the game when some fans wanted a foul called on LeBron James. Call this the Zaza Pachulia rule — where the defender has to allow the offensive player room to land.

So much for THAT rule pic.twitter.com/9G2twcBett

The reality of the situation is that the refs miss calls. It happens every night — that’s the human element of the game. While there were several questionable calls that went against Denver in Game 4, it is also far from the sole reason they lost.

Take it from Nuggets coach Mike Malone, who pointed to the Lakers’ 12 offensive rebounds and 41-33 edge on the glass as the reason Denver lost.

The margins are just so slim between these two teams that every little advantage feels like it counts for double. The perception will continue to be that James and the Lakers get a favorable whistle. Complaints about the refs were all over social media after Game 4:

It’s hilarious how many comments I’m seeing. Like, everyone knows. It’s not subtle. https://t.co/Uh4DCnWSpQ

Murray got fouled by LeBron on two drives, pretty obviously.

If they won’t call those, the Nuggets are losing the next game too

Denver did not lose because of the officials tonight, but they sure as shit did not help.

Did the Nuggets get a tough whistle in Game 4? Yes. Was it the reason they lost or an example of a pro-Lakers conspiracy? That’s a major stretch.

For one, both teams have shot the exact same number of free throws so far in this series:

The Nuggets also appeared to get a favorable whistle in Game 2, but couldn’t take advantage of it when Anthony Davis hit a game-winning buzzer-beater to put the Lakers up 2-0. If Denver wins that game, the series is tied 2-2 right now. Here’s a tweet that came from after Game 2:

to win that game

In terms of Vogel’s complaint earlier in the day influencing the refs, that’s also a stretch. Every team gives feedback to the refs after playoff games. It just got more attention this time because it’s LeBron and the Lakers.

Nuggets coach Mike Malone still likely felt pretty satisfied with himself with this quote after the game:

Nuggets coach Mike Malone: “I’m going to have to go through the proper channels like they did to get some more free throws.”

The Western Conference Finals are far from over even with the Lakers holding a 3-1 lead. The Nuggets have already erased 3-1 leads in two series during these playoffs so far. Denver needs to rebound better in Game 5. They need to get Jokic going again after a subpar Game 4. They need to move onto the next play if a call goes the other way.

So far, the Lakers have just been a little bit better than Denver. That’s where the discussion around this series should end.