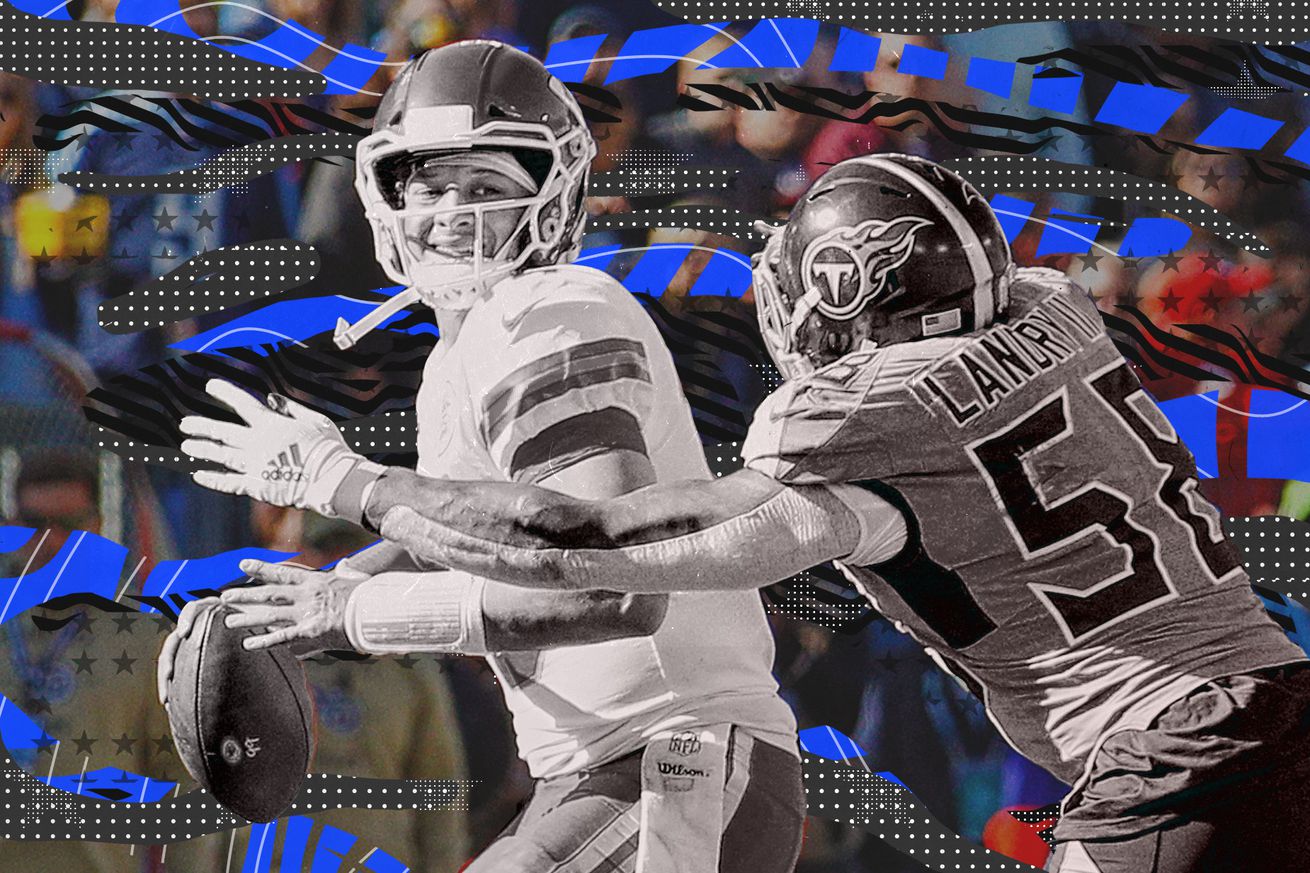 Patrick Mahomes and the Chiefs lost to the Titans in the 2019 regular season.

The Chiefs and Titans will play for the fourth time since 2016 when they meet in the AFC title game. The Titans came back to win the previous three, all in weird fashion.

Andy Reid enters the AFC Championship Game 1-8 against the Titans, both as the coach of the Chiefs and his previous stint with the Eagles. It’s the only team he’s never beaten twice. None of these losses appear to be related, as four of the eight have been against different Titans head coaches.

While it’s hard to find a traditional way all three of their last matchups relate, it’s easy to find an unconventional way they stand out: They are weird, one-score losses for the Chiefs.

In each of their last three losses to the Titans, the Chiefs had a decent lead and a win probability of over 95 percent at some point in the second half. They lost all of them in a uniquely odd way.

Should any of this matter this weekend? Let’s take a look back first.

In 2016, the Chiefs hosted the Titans in Week 15 with a chance to clinch a playoff spot. The game was played with a wind chill of minus-19 degrees, the coldest day in Arrowhead history.

The game was sloppy, but the Chiefs held a 17-7 lead at halftime. The Titans chipped away with a field goal and a touchdown, though they still trailed 17-16 due to a failed two-point attempt with just over three minutes left. The Chiefs weren’t able to run out the clock and kicked it back to the Titans, who worked their way down the field.

Titans kicker Ryan Succop lined up for a game-winning 53-yard field goal, straight into the wind with a brand-new kicking ball. He missed the first attempt, but Reid had called a timeout. Succop, the former Chief himself, nailed the second attempt and the Chiefs lost.

Just over a year later, the Chiefs hosted the Titans once again in the Wild Card Round. The home team came out firing on all cylinders, going up 21-3 early on. But then, the weirdness happened.

Chiefs middle linebacker Derrick Johnson came free on a pressure and sacked quarterback Marcus Mariota. In the process of falling to the ground, Mariota fumbled the ball and it was recovered by the Chiefs with a clear path to the end zone. But nope, referee Jeff Triplette ruled Mariota’s forward progress had stopped. It was an unbelievably bad call and took seven points off the board.

That wasn’t even the worst of it for the Chiefs.

Late in the third quarter, Mariota completed a touchdown pass to himself. Yes, that happened.

The Chiefs were still up 21-10 after that, but they eventually lost 22-21 and failed to score at all in the second half. Derrick Henry had a career-high 156 rushing yards at the time, though he would later run for more yards against the Chiefs in their next meeting.

Fast forward to this season, when the Chiefs went into Tennessee and lost 35-32 in another bizarre way.

It was Patrick Mahomes’ first game back after dislocating his kneecap a couple weeks before, and he still threw for 446 yards. However, two things let the Chiefs down. The first was their rushing defense; Henry ran for 188 yards that day. The second was their special teams.

The Chiefs led 32-27 and lined up to attempt a field goal to go up 35-27. The ball was snapped early — the first and only mistake like that this season — and holder Dustin Colquitt panicked and threw the ball away. It was an intentional grounding penalty and set the Titans up well for a go-ahead drive. It only took Ryan Tannehill four plays to go 61 yards for a Tennessee touchdown.

The Chiefs got the ball back with 23 seconds left and drove into field goal range, where the Titans blocked Harrison Butker’s potential game-tying kick:

the Titans get the FG block (!), beat the Chiefs (!!), and now the Raiders are a half-game away from the top of the AFC West (!!!) pic.twitter.com/cpuUpcgLl9

What does all of this mean for the AFC Championship Game?

Probably nothing, unless you believe in voodoo. So ignore all the noise about the strangeness of these matchups and focus on the part of the field that will matter most on Sunday: the red zone.

The Titans are outstanding in this area, while the Chiefs are not. Let’s explore it.

The Titans have scored 32 times in the red zone since Tannehill entered the starting lineup in Week 7, including the playoffs. They’ve scored touchdowns in 31 of those. That’s remarkable. There’s not a team close to the same ratio of touchdown success:

Red zone touchdown to field goal ratios over this time period (this is legitimately insane): pic.twitter.com/dILSwBSVTL

The reason the Titans are so excellent in this area of the field is their rushing attack. In the red zone, the field shortens and so do the windows to throw. Most teams play a two-high quarters coverage, which makes it tough for teams to run vertical concepts in the middle of the field. When teams play two-high, there are fewer players in the box, so running the ball is important.

Since Week 7, the Titans have led the NFL is rushing EPA (expected points added) and yards per average in the red zone, as they’ve bulldozed their way into the end zone. Tannehill was just about average, and in the playoffs hasn’t done much in the red zone. He’s only 3 of 7 on his red zone throws, but he has two touchdowns, even if one of them was by Jonnu Smith’s butt cheek.

The Chiefs’ defense is 31st against the run, according to Sports Info Solutions, but weirdly enough, the unit was third against the run in the red zone during the regular season. I’m not sure how to explain that, other than teams aren’t attempting to rush the ball as often, because the Chiefs’ pass defense hasn’t been as great in the red zone.

Nonetheless, the Chiefs need to stop the Titans’ rushing attack in the red zone, because they are going to attempt it to ram it down the Chiefs’ throat in that area of the field. Even holding the Titans to one or two field goals could lead to a Chiefs win.

On the flip side, the Chiefs’ offense has been off in the red zone this season. Entering the playoffs, they were 20th in the red zone converting scoring chances into touchdown. It’s a low ranking for a team that’s so elite on offense. The reason is the Chiefs’ inability to run the ball, the opposite of the Titans.

According to Sports Info Solutions, the Chiefs were 26th in points earned via the run in the red zone during the regular season. The Chiefs improved last weekend, converting 7 of 8 (lol) chances into touchdowns. That feels like an overcorrection to the season, but also it’s a reflection of the poor Texans defense, which played way too much man coverage.

But, that’s a positive anyway. If the Chiefs covert 75 percent of their red zone opportunities this weekend, while holding the Titans to 50 percent, the Chiefs will win the game easily. And their recent history against the Titans can finally be put in the rearview mirror.