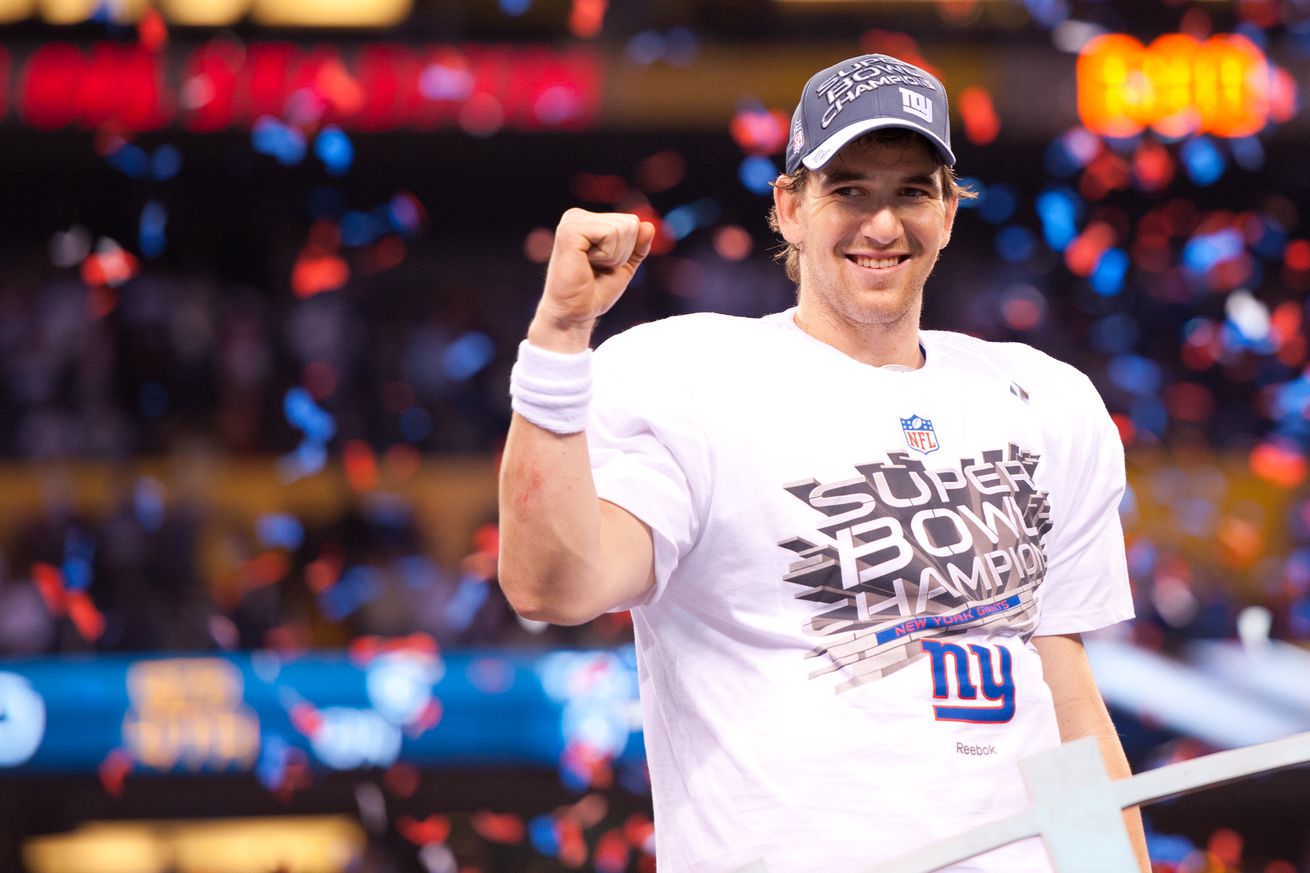 Few quarterbacks have ever been better in Super Bowls. Those guys were all great in the regular season too, though.

It’s not hard to make Eli Manning’s case for the Pro Football Hall of Fame.

Manning ranks seventh all-time in both passing touchdowns and passing yards. He won two Super Bowls during a 16-season career with the New York Giants and was MVP of both games. The other four winners of multiple Super Bowl MVPs — Tom Brady, Joe Montana, Bart Starr, and Terry Bradshaw — received, or will receive, a bust in Canton without controversy.

And yet, it’s not difficult to make the case that he wasn’t very good, either. He made the Pro Bowl just four times and was never once a first-team All-Pro.

There are a handful of other mostly mediocre quarterbacks who saved their best football for the Super Bowl. But Manning stands above the rest.

The only major passing statistic Manning ever led the NFL in was interceptions, something he did three times. He’s one of 11 quarterbacks to start at least 160 games in the last 16 seasons, and he’s dead last out of those 11 players in passer rating — behind Carson Palmer, Alex Smith, and Joe Flacco.

Peyton also won more than 70 percent of the games he started. Meanwhile, Eli’s starting record was as mediocre as it gets:

the universe is at a balance once again pic.twitter.com/CqQourlHTg

Eli’s play — helped by his Super Bowl credentials — was good enough to keep him in the Giants’ starting lineup for a decade and a half. It didn’t earn him many accolades and never a spot among the NFL’s elite, however.

Eli still got a sendoff reserved for only the most esteemed players. Even the NFL commissioner released a statement about Manning’s retirement:

Manning was as respected as any player in the league, despite his career being a perfect blend of averageness and greatness. It’s that contrast that means in five years, and likely several years beyond that, there will be debates about whether his Super Bowl performances warrant a spot in the Hall of Fame.

Manning was a different player in the biggest moments

Manning completed 66.2 percent of his passes in those two wins with 551 yards, three touchdowns, one interception, and a 96.2 passer rating. Few quarterbacks have ever performed better with the Lombardi Trophy on the line.

His most memorable moment was connecting with David Tyree on a play that resulted in the demise of the undefeated Patriots:

It’s the kind of play — along with his ridiculous throw to Mario Manningham four years later — that he only seemed to make at the most clutch time imaginable.

It wasn’t just the Super Bowl either. Manning had a 99.1 passer rating in the three playoff games leading up to Super Bowl 42, and a 103.1 in the three-game run to Super Bowl 46. In the latter, he led the Giants to an overtime victory on the road against the 49ers in the NFC Championship, despite being hit 12 times by a ferocious San Francisco pass rush.

That version of Manning was one of the best to ever play the game. He just didn’t perform like that in the regular season with any consistency. Only a few quarterbacks have ever had that kind of dichotomy between their play during the regular season and in the Super Bowl.

How many other QBs flipped a switch in the Super Bowl?

Manning’s career was defined by big moments on the biggest stage possible. But he’s not the only one who’s built such a reputation in the modern era of the NFL.

Two years ago, the Philadelphia Eagles won their first ever Super Bowl largely thanks to their backup quarterback, Nick Foles. He was thrust into action late in the year when Carson Wentz suffered a season-ending knee injury.

After leading Philadelphia through its postseason slate, Foles capped his run with 373 yards, three touchdowns, and one interception in Super Bowl 52. He also caught a touchdown in the 41-33 win against the Patriots.

Foles joined Manning as one of only two quarterbacks to beat Brady in a Super Bowl. And like Manning, the superb performance that earned Foles Super Bowl MVP honors was much different than how he played during the regular season. Even with Foles’ Pro Bowl season in 2013 — in which he threw 27 touchdowns and just two interceptions — he has a career passer rating of 88.2. That’s well below his Super Bowl rating of 106.1.

He wasn’t able to recreate his playoff magic in January 2019. Then Foles had a nightmare the next season with the Jaguars. First he went down with a shoulder injury, and later he was benched shortly after returning to the starting lineup. His status as a Super Bowl legend can’t be erased, though.

The masterful postseason earned Flacco a then-record $120.6 million contract too. He wasn’t able to lead the Ravens back to the Super Bowl again before he was replaced by Lamar Jackson, though.

After an unimpressive stint as the Buccaneers starter, Williams spent two years in the USFL. He was signed by Washington to be Jay Schroeder’s backup, but took the reins and led the team to a Lombardi Trophy.

Williams threw for four touchdowns and 340 yards in Super Bowl XXII, netting him a 127.9 rating that was as high as his best-ever regular season performance.

Hostetler’s the only one on this list who wasn’t named Super Bowl MVP, but he had an argument for the award in Super Bowl XXV after throwing for 222 yards and a touchdown. The award instead went to running back Ottis Anderson for his 102-yard day.

Hostetler made it to the playoffs again three years and added another four touchdowns with no interceptions. That upped his career passer rating in postseason play to 112.0.

None of those players pulled off Super Bowl magic twice, though. That’s where Manning stands alone, and why his legend as a Super Bowl hero will be hard for any other mediocre quarterback to top.