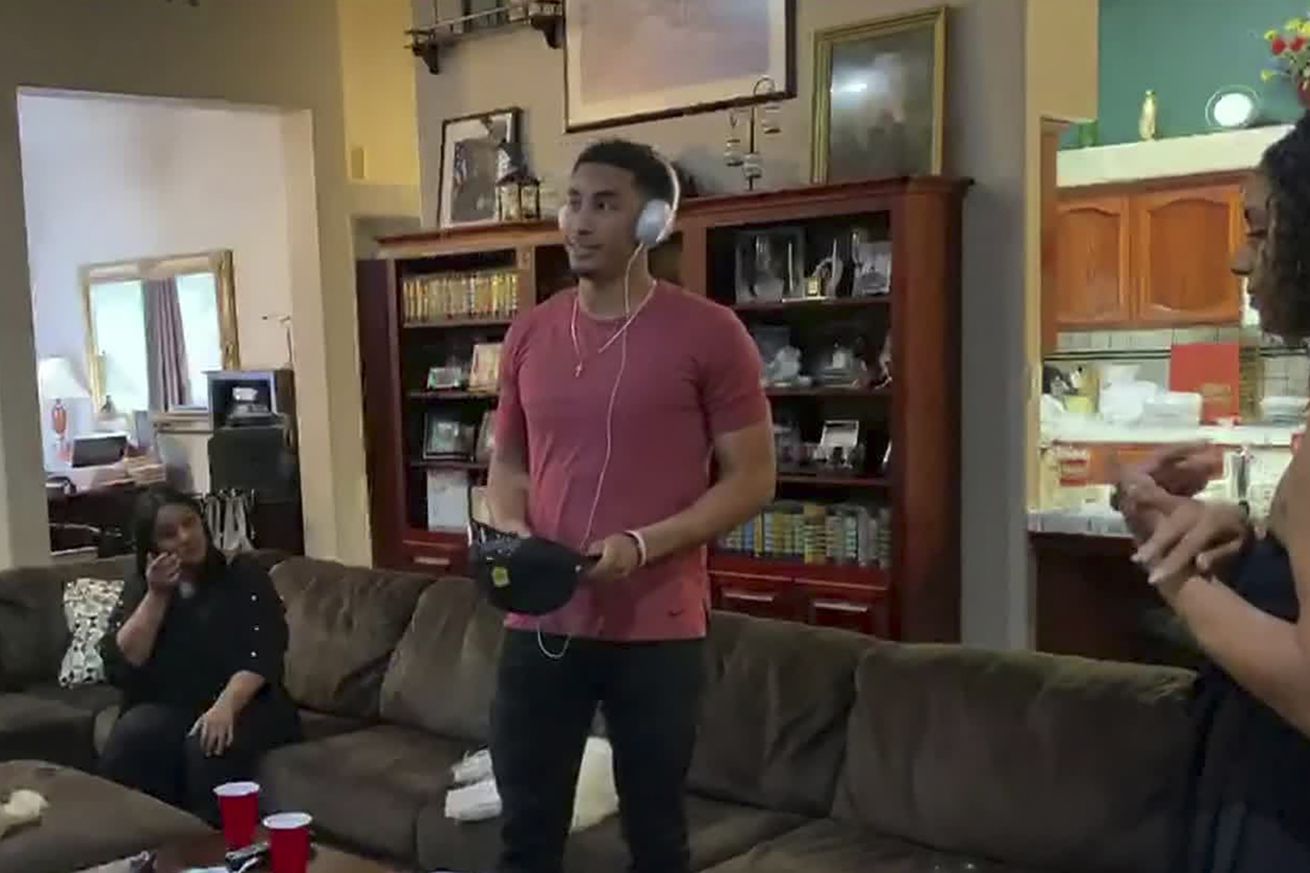 Photo by NFL via Getty Images

Geoff Schwartz has a different kind of grading system, based on which player was drafted and who was still available.

For all the pre-draft talk about trades, surprise picks, and overall wildness, the top of the 2020 NFL Draft went as chalk as it can go. No one traded up in the top 10, and there wasn’t an unexpected pick until the middle of the first round.

Things got a little more unpredictable after that.

Instead of assigning every first-round pick a specific grade — which Dan Kadar already did — I went with a different approach. I gave them all a pass or fail grade, depending on who was drafted and what other options there were.

Duh. This was the clear choice for the Bengals. Burrow had one of the best college seasons of all time. The intangibles, the leadership, showing up in big games, and his ability to find the hole in the defense and attack it — all elite. This was always the pick, and the Bengals didn’t bungle it.

Double duh. Young was the highest-graded player in the draft for most people. It’s hard to find pass rushers out of college with multiple refined moves. He’s also able to counter well, including a spin move. Pair him with Ryan Kerrigan, and Washington has a formidable pass rush.

The Lions didn’t screw this up. Can you find me an elite defense without an elite corner? Nope. And with Darius Slay gone, Okudah can be that guy. He loves to tackle as well, which can be uncommon with that position. The Lions had to make this pick to get their defense back on track.

Look, this grading scale is harsh. I don’t think it’s that bad of a “fail” for the Giants, but there were better tackles on the board. Drafting Thomas means they’re moving Nate Solder to right tackle, which isn’t a position he’s played much in the NFL. Thomas needs to work on his hand usage, which is doable because he’s got awesome footwork and ability to recover. If Giants were looking for a left tackle, Mekhi Becton was available — and is better.

I’m the biggest Justin Herbert fan there is. But this pick was a coup for the Dolphins. They entered the 2019 season attempting to Tank for Tua. It didn’t go as planned, and they ended up with the fifth pick. Despite reports the Dolphins were looking to move up, they never did. They stayed at No. 5 and drafted a dynamic talent in Tagovailoa. Injuries are a concern, but I think they had to pick him over Herbert.

If you had to choose a spot for Herbert, this would be it. First off, there’s no pressure right now for the Chargers. They are the 11th team in Los Angeles. Herbert needs time to fix some of his issues, and he can do it sitting behind Tyrod Taylor. His weapons were nonexistent at Oregon, and now he gets Keenan Allen, Mike Williams, Hunter Henry, and Austin Ekeler. This is a great situation for him.

There were both best player available picks. It’s hard to argue with the Panthers grading Brown higher than Simmons, who played multiple positions in college. I will say the explanation from the Panthers about why they chose Brown over Simmons is rather odd, though:

The Panthers liked Clemson LB Isaiah Simmons a lot at No. 7 and he was the best pure athlete on the board, but they felt he was a better fit for a veteran team because of his ability to play so many positions. So they went with Auburn DT Derrick Brown,… https://t.co/Wfu6yhMSgv

At this point in the draft, Henderson might not have been the highest player on the board, but he was high enough at a position of extreme need. I think the Jaguars did the right thing. They could have overdrafted a wide receiver or an offensive lineman, but this was the best call.

I’m fortunate to be well connected in the offensive line community, and I can’t find one person who thinks he would be a slam dunk at left tackle. I don’t know why you wouldn’t draft a pure left tackle. You have to hope Wills follows the path of Tyron Smith, who played right tackle in college and made the switch in the NFL.

The Jets must have been thrilled when Becton dropped to them. Becton has the highest upside of any offensive tackle in the draft. He can be special, and the Jets need someone like Becton to help protect Sam Darnold.

The Raiders had their choice of wide receivers and took the one who’s the least polished and most likely not a No. 1 guy. Of course they did. They took the speed guy with great run-after-catch skills, instead of a better receiver like Jerry Jeudy or CeeDee Lamb.

Tampa Bay ended up with a fantastic offensive lineman, and it only took trading up one spot to get him. While Wirfs won’t start at guard, he might end up there. He can be a terrific OT, but he could be an All-Pro OG eventually. Wirfs has excellent balance, power, and core strength.

I don’t get this one honestly. In my opinion, it doesn’t help the team get better. The 49ers already have an outstanding defensive line. They could have used a wide receiver, a future left tackle when Joe Staley retires, or a defensive back. You can say this is a best player available pick, and I can’t argue that. But again, I’m not sure how this helps them get back to the Super Bowl.

This is a home run for the Broncos. A guy they coveted the entire process, and the Broncos didn’t even have to move back for him. Jeudy is another weapon for Drew Lock and another upgrade this offseason for Denver’s roster.

Given where the Falcons were picking and what they needed, Terrell makes sense. He plays the type of press corner that works in the Falcons’ scheme. You could debate the Falcons could have waited to draft a DB, but they weren’t getting a top-flight talent in the second round.

The Cowboys can’t have enough weapons for Dak Prescott. There’s not much more to say. Lamb was the best player still on the board at that position.

Jackson needs some work. He’s young and has potential, but he has to improve his technique and get his play strength up. The problem I have with this pick is Jackson will most likely play right away, and he’s not ready fo that. There’s too much recent history of drafting “high upside, raw technique” guys early and expecting them to play, and then it not working out.

It’s hard to find many people who had a first-round grade on Arnette. It just feels like such a Raiders pick when everyone is trying to figure out why a player was drafted so high. The draft is about finding value and the Raiders failed to do that twice.

The Jaguars need pass rush help, and Chaisson was the best player left on the board who can rush the passer. With Yannick Ngakoue probably out the door, this makes complete sense.

This is a great pick for the Eagles’ offense. Reagor is on the smaller side, but he’s super quick and fast. He’s an excellent fit in the West Coast offense, which relies on shorter passes with longer runs.

I think this is a huge steal for the Vikings, getting a weapon like Jefferson. Jefferson might be the third-best wide receiver — fourth at worst — in this draft class.

The Chargers traded back into the first round for Murray, who’s a great fit for their team. The Chargers have improved their roster this offseason and if they hit on Herbert, they could challenge the Chiefs in a few seasons.

I don’t dislike this pick that much, but it just feels unnecessary. The Saints didn’t have many holes to fill, and Patrick Queen was still on the board. I had assumed Ruiz would move to OG because current center Erik McCoy played well as a rookie, but that doesn’t appear to be the case. It just feels like a luxury pick.

Aiyuk can fly and is a great route runner. He’s going to be a perfect receiver for the 49ers’ offense.

WTF, Packers? You just went to the NFC Championship Game and then use your first pick on a QB who won’t play for years. You needed to get Aaron Rodgers help at wide receiver, and he’s on the hook for at least two more seasons. This feels like such a waste of a pick, especially on a QB like Love, who has to grow so much to be an elite QB.

On the list of team needs, a box linebacker is like 15th on that list. I have no idea what the Seahawks are doing. They could have taken an offensive tackle or a pass rusher. It just makes no sense.

The Ravens get the guy they wanted the most. Queen is exactly what the team needed at linebacker. Queen can move so well laterally, and he’s going to fit well in this scheme.

Wilson is a giant human and should slide right into the Titans’ run-based offense. He is a better run blocker than a pass protector at the moment, and he can be hidden in pass protection for now. Good pick.

Honestly, I don’t have much here. I don’t pretend to be a guy who dives deep into the cornerback position. Twitter seems to like the pick, so I’ll roll with it.

Ditto what I said above. He was graded as a first-rounder. He went in the first round. Good for me, especially because it fills a big need for the Vikings.

WHY WHY WHY? Don’t draft a running back in the first round!

It’s so counter to everything the Chiefs and Andy Reid have done. I don’t get it.