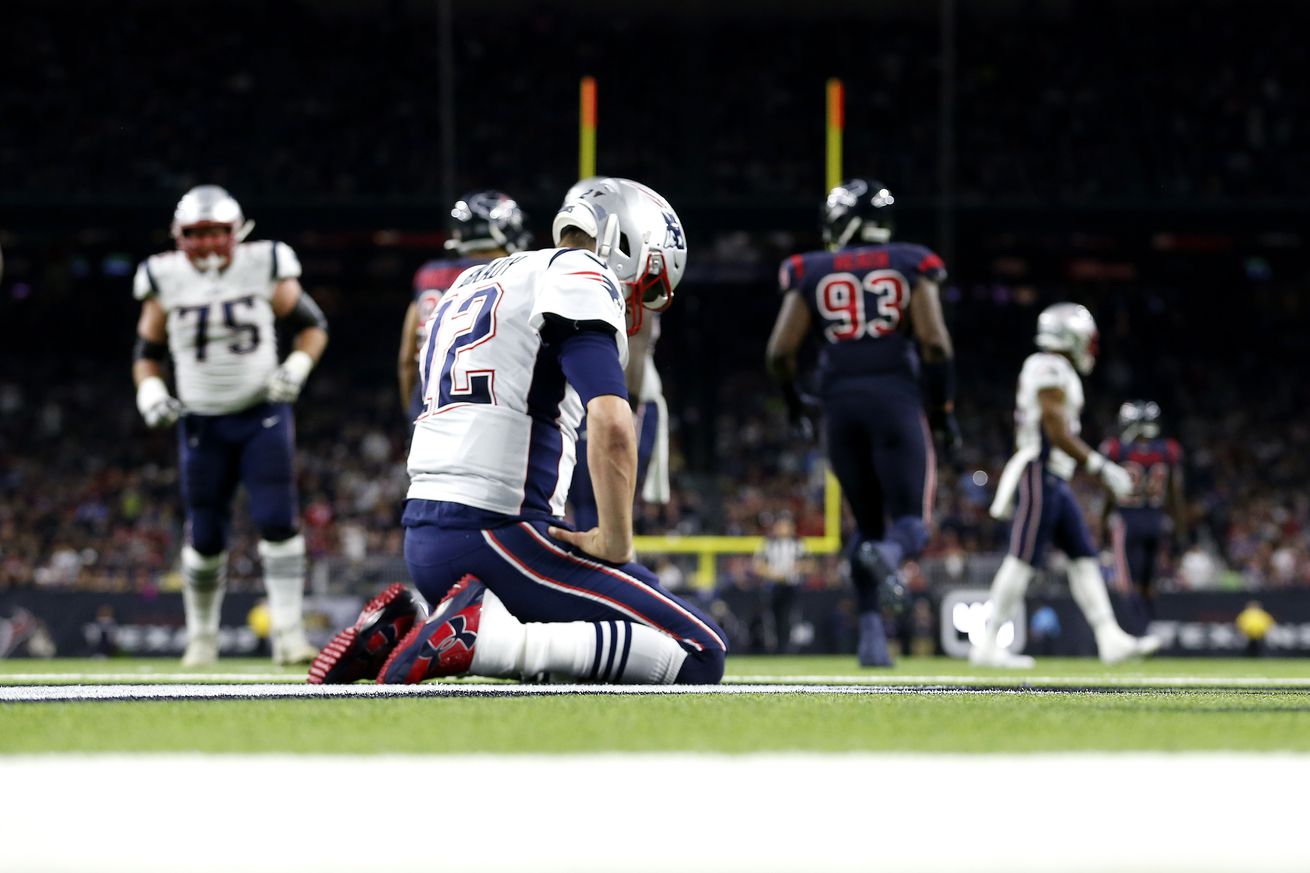 At this rate, the playoffs are going to be pure chaos.

Alright NFL, you did it. You broke me. Are you happy? I don’t think it’s too much to ask that after 13 weeks, the league could give us a basic idea of which teams were good, which ones were bad, and who might have a chance to make it to the Super Bowl. Instead I sit here, a sad and broken man, without any clue what the actual hell is happening in the NFL.

Platonic ideals of parity aside, this season has completely gone off the rails. Rewind two months ago and it all felt so easy. The Patriots and Chiefs would likely contend for the AFC Championship. On the other side, you had the 49ers and the Saints. Now, who knows?

I’m truly left feeling like this is going to be a weird trap year when an obvious favorite flames out in the first round to some barely-.500 team in the kind of shocking postseason that leads to discussions about whether the whole system needs to be revamped.

Let’s start with the AFC. So you have the Patriots, but they don’t look invincible this season, not by a long shot. Losing to the Texans on Sunday night seriously damaged any absolute faith you could have in this team. The natural progression is to say, “Well, maybe the Texans really are that damn good.” Except they’ve lost to the PANTHERS this season and got decimated by the Ravens.

So then we go to the Ravens. They seem incredibly good and are coming off a big win over the 49ers to improve the resume. Lamar Jackson is playing some of the most exciting football in the NFL, period. They definitely fit the bill. Then you remember they lost to the Browns and barely scraped by against the Bengals.

The Bills? Look. I’m excited for Bills fans, but it’s going to be a cold day in hell when I anticipate anything positive for the Bills. Trust me, Bills fans don’t want anyone saying they have a chance at winning anything for fear of a jinx, and I’m much happier not going through a table in a frozen parking lot.

The AFC could be an Occam’s razor situation. Maybe the simplest answer is the correct one, which causes us to circle back to the Chiefs. Ah yes, the Chiefs. Easily the NFL’s must-watch team at the start of the season. They then went on to lose to … the Texans and Colts.

If you can make sense of this, I’d love to hear it. All I see is a complete crapshoot that logically can only end with the Ryan Tannehill-led Titans finding a back door into the playoffs, beating the Patriots or Chiefs and playing ultimate spoiler.

Surely things must be more normal in the NFC, right? HAHAHAHAHAHAHA!

The Saints are the hot pick, and it’s understandable. Veteran team, Drew Brees, they’ve already clinched their division, the whole nine yards. When the Saints are good, they’re damn near unbeatable, and when they’re bad, they lose by 17 to the Falcons, which is an actual thing that happened less than a month ago. And lest we forget, they needed an undrafted kicker in Carolina to shank a 28-yard field goal to survive against the Panthers a mere week ago.

The 49ers are in the picture too. They’re at 10-2 and really are the total package. A stout defense with a young, exciting offense. There’s no reason to bet against them when a prospective playoff run is on the cards — except that loss to the Seahawks. “It was overtime,” you might say, to which I’d remind you that San Francisco got a serious scare from the Cardinals, Steelers, and Washington this year, all of which came down to single digits.

Drop a level and we have the Packers, Seahawks, and Vikings. They suffer this same weird round-robin effect of ugly losses, close scares, and unconvincing victories that make it tough to really get on board in a meaningful way.

This season is so wacky that Washington at 3-9 isn’t just in the playoff hunt — it could still win the NFC East.

I need to stop think about this. Let’s go around the league.

This juke is poetry.

Lamar juked him right out of his shoes @Lj_era8 pic.twitter.com/eVVxNrMnct

Yes, I know it was wet on the field — but stop trying to hate on fun. Lamar Jackson is just so damn fun to watch. The only thing that would have made this clip better is if Jackson literally caused people to lose their shoes, which I also fully expect to happen by the end of the season.

I love this play more than life itself.

The @MiamiDolphins pull off the trickery! #PHIvsMIA

There is nothing more perfect in this world than a punter throwing a touchdown to a kicker. It’s two unlikely flavors that somehow go together — like pickles and peanut butter (trust me, try this). In any event, not only is it the kind of bald-faced weirdness I can get behind for a team whose season is over, but it was incredible enough that it rectified one of the worst NFL plays of all time and proved that somehow this can work.

Maybe the best part of this play is that it’s called “The Mountaineer Shot.” I’m a fan of any play that sounds like the most dangerous moonshine you’re ever going to drink.

Congrats Florida, for spawning the dumbest NFL fans of the season.

We got anti-vaxers here at Bucs-Jags. First time I’ve seen that crowd at an NFL game. pic.twitter.com/6OkcYF9gGb

I like the referee imagery, though. It’s on brand. Nothing says “making a grave mistake while turning a blind eye” better than a ref. It’s just a shame you can’t go to instant replay when your kid contracts measles.

Or in Arkansas’ case, the mumps.

Arkansas athletics released a statement yesterday about the Mumps incident on the U of A campus. Sources tell me the number of football players with Mumps is significant.

The effective end to the Panthers’ season is sadder than you could ever imagine.

Kyle Allen running serpentine out of the frame is a metaphor for Carolina’s entire season. It’s just so sad — especially when you see that No. 13, Jarius Wright, was open in the end zone for almost the entire play.

Carolina lost to Washington and while the Panthers’ season isn’t technically over … it’s totally over.

Shoutout to the Jets for truly bringing futility to new levels.

It takes a special level of skill, determination, and horrible play to lose to the 0-7 Dolphins and the 0-11 Bengals in the same season. It’s community outreach. Nobody is better at making the rest of the country feel slightly better than the Jets.

“Guys, we got a beef … STOP! Hey. We got a fondue set! Cook quicker! Cook everything! If you f*** up one more onion. Alright?! Make you you poach the chicken OFF THE BONE! Everyone on the same page? Good because we’re running out of f***ing oil and I’m not eating Top Ramen.”

I’ll let you be the judge. Either he said something to try and motivate his team, or he was unhappy with the fondue preparation on the sideline. I know which truth I believe.