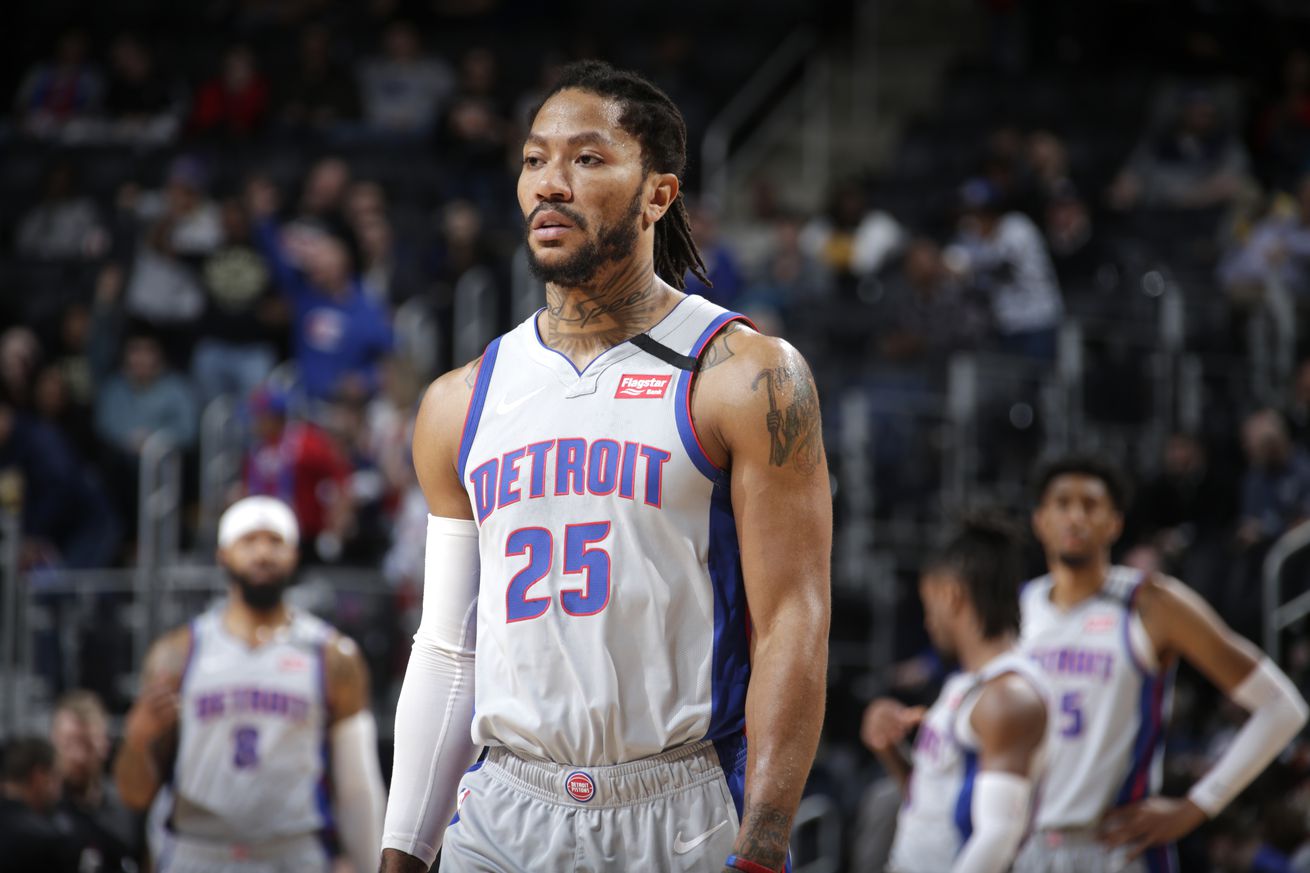 The Lakers and 76ers are both reportedly showing interest in Derrick Rose.

The Los Angles Lakers and Philadelphia 76ers are two teams gauging the trade market for Detroit Pistons point guard Derrick Rose, according to Chris Haynes of Yahoo! Sports. Rose signed a two-year, $15 million contract with the Pistons in the offseason, and has turned in his most productive season since injuries diminished his career following his MVP run in 2010-2011.

Rose, now 31 years old, only plays 25.8 minutes per game for the Pistons, but has been a dynamic scorer and facilitator when he’s on the floor. He’s putting up 18.3 points and six assists per game, with per-100 possessions averages that rival his MVP numbers.

Trading Rose for a long-term piece makes sense for the Pistons. Detroit is off to a 16-28 start that has featured a season-ending knee injury to Blake Griffin and rumors the team could trade long-time center Andre Drummond ahead of his impending free agency. While the Pistons remain only three games out of the final playoff spot in the Eastern Conference, it is about time for the franchise to commit to a full rebuild.

Rose stood trial in a civil lawsuit in 2016 for rape allegations. He was found not liable.

Derrick Rose fits with the Lakers

The Lakers are sitting atop the Western Conference behind the superstar play of LeBron James and Anthony Davis, but the team isn’t satisfied. The team has been involved in trade rumors throughout the season as it looks to upgrade its supporting cast.

Rose would be an ideal fit for the minutes James rests, but it’s unclear how much he would help Los Angeles when its best players are on the floor.

The Lakers have been looking for a guard who can run the offense and add supplemental scoring, two boxes Rose would check. Rose can effectively operate a pick-and-roll and is a skilled finisher around the rim. This season he’s making 68.3 percent of his field goals inside of three feet, per Basketball Reference, and has a 42.4 percent assist rate. Both numbers represent career-highs.

Where Rose struggles is as an outside shooter and defender. Rose is shooting only 31.8 percent from three-point range this season. He’s also graded out poorly in individual defensive metrics like DBPM and 538’s RAPTOR.

Rose would give the Lakers offense a kick in spurts, but it’s no lock he would be effective playing off the ball with James running show given his limitations as a shooter.

Kyle Kuzma and salary filler would work out in a trade. If the Lakers don’t want to trade Kuzma, a young player like Talen Horton-Tucker, the team’s second round pick in the NBA draft, could also be the focal point of a deal.

How Derrick Rose fits with the 76ers

Philadelphia is currently No. 6 in the Eastern Conference, struggling to live up to preseason title aspirations in part because of a lack of depth in the backcourt. Rose would give the Sixers a speedy guard who can run pick-and-roll with either Joel Embiid or Ben Simmons, but his lack of shooting makes him a poor fit when both are on the floor.

Philadelphia could easily upgrade over Raul Neto and Trey Burke with an in-season trade, two guards who have been forced into part-time roles off the bench this season. While both are quality outside shooters, Rose would give the Sixers a guard who can attack the basket on a spaced floor, which is a dimension the team currently doesn’t have. Rose’s ability to push the tempo could also help a team that currently ranks No. 20 overall in pace.

If the Sixers are going to trade for a guard, it makes sense to target one who is a better outside shooter than Rose. His drives the basket won’t be as effective with Simmons and Embiid in the paint. The Sixers need to find someone who can complement their stars, not someone whose game clashes with them.

Expect Rose to be involved in rumors until the deadline

Rose is going to be one of the hottest names on the trade market until the deadline. Teams looking for a guard who can put pressure on the rim with drives to the paint won’t find a better available option. In the case of both the Sixers and Lakers, though, it’s worth noting just how much Rose’s role would have to change in crunch-time.

Rose has played so well in Detroit in part because the team has given him the freedom to run pick-and-rolls and isolations. It’s unlikely he’s going to have the ball in his hands as much on a contender surrounded by better teammates.

The Pistons will likely move Rose before the deadline. The Lakers feel like a better fit than the Sixers out of the teams mentioned in this rumor.