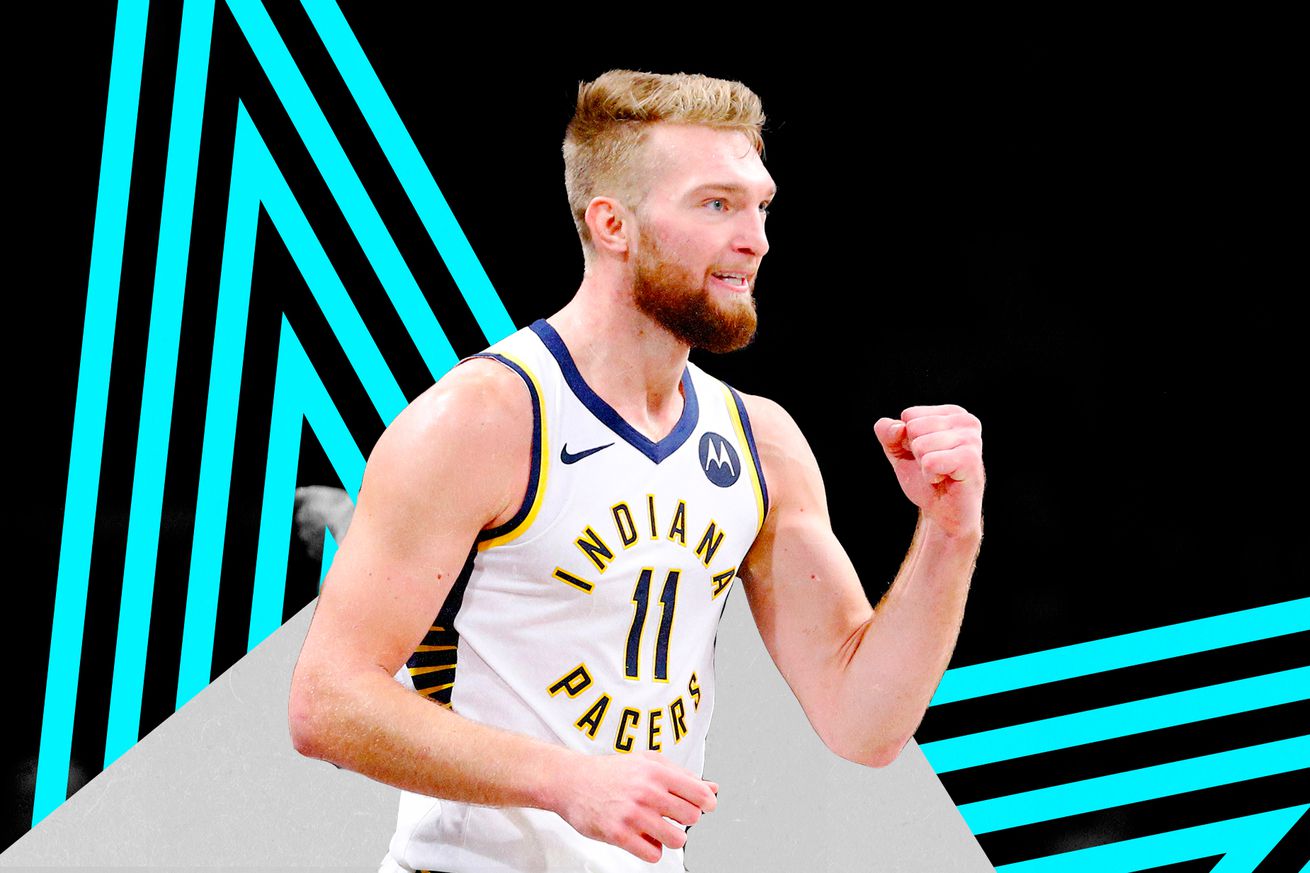 Sabonis is a master at the art of screening.

Sabonis’ subtle screening makes a big impact for the Pacers.

Whether massaging the offense at the elbows as a dribble hand-off connector, wriggling through tight spaces with footwork and body control at the block, or steamrolling over the top of traffic off dives and rolls, Domantas Sabonis is most noted for his production.

Less than 20 games into his fourth season, Indiana’s walking double-double is one of only three bigs in the league averaging at least 18 points, 10 rebounds, and three assists, and he’s doing it without playing much above the rim and only sparingly spreading the floor. And yet, marveling at what he chews up and spits out as a (mostly) ground-bound, one-man wrecking crew not only fails to paint the full picture of what he brings to the Pacers on a nightly basis; it actively ignores what he adds as an intuitive screener that doesn’t show up in the box score.

To be fair, setting the perfect pick is, in general, an underappreciated art. After all, standing still is a yawn in comparison to dazzling handles, early advantage threes, and acrobatic finishes. When watching the Pacers, for instance, it can be easy to get wrapped up in how deceptively shifty Malcolm Brogdon is at driving out the competition without paying much attention to the screen that helped peel him free from his defender — even if the player doing the peeling is among the very best at it in the league.

Per the NBA’s hustle data, Sabonis currently ranks second in the NBA in screen assists with 7.5 per game, trailing only Utah’s Rudy Gobert (7.9). Not too shabby for someone playing on a roster with seven new faces while also being forced to adapt to six different starting lineups in the 17 games he’s been available as a result of injuries. With so much night-to-night change, Indiana’s lefty big man doesn’t just follow marching orders, staying strong and wide on the screens dictated to him by the offense’s constructs; he acts on instinct for a team short on continuity, toying with angles and ambushing blind spots when all else fails.

In paying homage to those moments when the defense calls on him to counter or break from choreography, here’s six times when Sabonis demonstrated that setting a screen is oftentimes about much more than just transforming into a brick wall.

If at first you don’t succeed, try, try again

Like the repetitive pattern of a grapevine growing in and out of a lattice, such is the nature of Sabonis when screening for Jeremy Lamb. Over and over again, whenever Lamb’s defender ducks under one way, Sabonis flips to the other side to preserve the silky stop-and-pop scorer’s space to operate.

This is especially effective against bigs like Jonas Valanciunas who don’t want to stray too far outside the paint, and it’s a natural extension of a dribble hand-off when the recipient, like Lamb, is unlikely to fire away from three while moving away from the basket. As such, one re-screen to flow into pick-and-roll in this case is common. Two, however, with Sabonis eventually opening up his stance to completely seal off Brandon Clarke, is not only a fun easter egg to watch for during Pacers broadcasts; it’s an effective means of opening Lamb up to clean shots that don’t require him to make plays for others.

Tellingly, so far this season, Lamb has an effective field goal percentage of 57 percent in the 218 minutes he’s played with Sabonis, compared to 43 percent in the 124 minutes he hasn’t. That’s a 14 percent increase!

Get a new slant

With Malcolm Brogdon ranking near the top of the league in drives per game, more and more opponents are coming loaded for bear with push schemes aimed at forcing him away from the middle of the floor (also known as ICE coverage).

In order to combat this defensive tactic, Sabonis will call out the coverage and then tinker with the angle on the screen before making contact. By rapidly changing the direction on the pick from a regular ball screen to a step-up (a flat screen set with the screener’s back to the baseline), the counter punch restores Brogdon’s options and nets him the space to drain the pull-up jumper before Orlando’s Evan Fournier even knows what hit him.

Granted, this isn’t abnormal to what most teams do to regain advantage in these situations, but take a closer look at how quick and smooth Sabonis is at adjusting on that possession. He isn’t stopping to signal and then taking time to shift position. It’s almost like he’s standing on a hover board and he and Brogdon are two magnets instantaneously flipping poles from repel to attract.

One could of course quibble that this is a tad mid-range heavy, but Brogdon doesn’t quite have a handle on proficiently snaking his dribble in front of the screener and he’s shooting a career-high 52 percent on 4.7 pull-up twos per game, which is worth more points than his off-the-dribble three (0.768).

With chemistry already far exceeding their meager experience playing on the same team, it also doesn’t hurt that the Pacers have outscored opponents by a mammoth 13.7 points per 100 possessions in the 379 minutes that Brogdon and Sabonis have been on the floor together, making them Indiana’s strongest two-man combination.

Valuing shot-quality over shot-quantity, the Pacers rarely chuck up threes as soon as they cross the half-court line, but they will set flat away screens in semi-transition as a quick-hitter for shooters, like so:

Where Sabonis differentiates himself though is with his read of the floor when things don’t go quite according to plan. In that sense, his screens aren’t so much bone-crushing as they can be brain-melting. Here, for instance, like a crafty passer dissecting an alignment, he processes a lot in a split-second. Noticing that OKC’s Hamidou Diallo is lost in space, he signals for McDermott to cut toward the ball, but instead of setting a pick on someone who isn’t there, he simply screens his own check so as to prevent a switch while walling off the nearest defender.

Voila! And just like that, the same play goes off without a hitch.

Generally speaking, the Pacers get a lot of use out of screens by not using them. Malcolm Brogdon will get his man moving one way and then with a nimble cross-over, he’ll mercilessly expose the rejection side of a pick to his penetration. Rather than painting by number, T.J. McConnell routinely colors outside the lines, seizing any and all opportunities to go away from set plays in order to zip straight to the rim as the role player your favorite team told you not to worry about.

In both cases, the picks merely provide smoke and mirrors for the craftiness of the ball-handler, but maintaining spacing after player movement begins is crucial — and that’s where Sabonis makes a considerable difference.

Take this possession against the Houston Rockets, for example. As soon as Sabonis notices that Russell Westbrook has signaled to Tyson Chandler to jump out above the level of the pick, he aborts the screen and moves to the open spot on the floor.

Almost like taking a decongestant, that tiny step back is huge because it clears room for McConnell to split, rather than ensnaring him in a mess of bodies, as has so often happened to Victor Oladipo over the last two seasons.

Don’t get it twisted, staying out of the way is a skill.

Make use of your assets

With a penchant for sticking his hip out and not giving opponents an opportunity to avoid contact, Sabonis has been whistled for more than his fair share of illegal screens. So much so that he got caught in a speed trap versus the Washington Wizards and picked up four all in the same game. That said, he also knows how to game the system. For whatever reason, it seems that players are more likely to get nailed for moving laterally into an opponent being screened than they are for deliberately backing into the space of an opponent being screened. In other words, the butt check oftentimes goes unchecked.

By leaning forward and deliberately making himself thiccer (yep, I said it), look at how much more circuitous the path is for D.J. Augustin to recover in rearview pursuit with a round thing in his face — or, rather, even with the level of his crowbar-like elbow.

As was briefly mentioned above, he also gets a lot of play out of rolling/pivoting directly into the space of the on-ball defender when they attempt to duck under.

This isn’t technically a screen, but his derriere is to thank for why T.J. McConnell was able to find this passing angle to Justin Holiday in the corner.

From super-sub to high-functioning starter, Sabonis still isn’t above doing the dirty work.

Keep your energy up

On top of being a thankless act, screening is physically demanding. Hits are taken. Bumps are absorbed. And stamina is required.

Consider this rundown of Sabonis’ workload from just one trip down the floor against Detroit:

— Set an off-ball pick for T.J. Warren to fly off a stagger

— Posted just long enough to scan the defense before throwing a kick-out to T.J. McConnell

— Wrestled with, and out-jumped, three Pistons for another offensive rebound

— Hit McConnell cutting to the basket with a slick bounce pass

Here it is in video form. Try not to get tired while watching it.

Part of the incentive for setting strong, solid screens is that doing so makes the screener more apt to get the ball back; however, as you may have noticed, in each and every one of these examples, Sabonis’ only reward for tirelessly sacrificing his body is the knowledge that he made his teammates look good with his unique brand of skills, smarts, and strength.

That’s why, in addition to his swollen production in increased minutes, the lefty big man’s ability to keep the offense chugging from behind-the-scenes has suddenly made him appear indispensable to a team that not even two months ago had reportedly considered listening to offers for him before reaching agreement on a contract extension.

Maybe, standing still isn’t so boring after all?