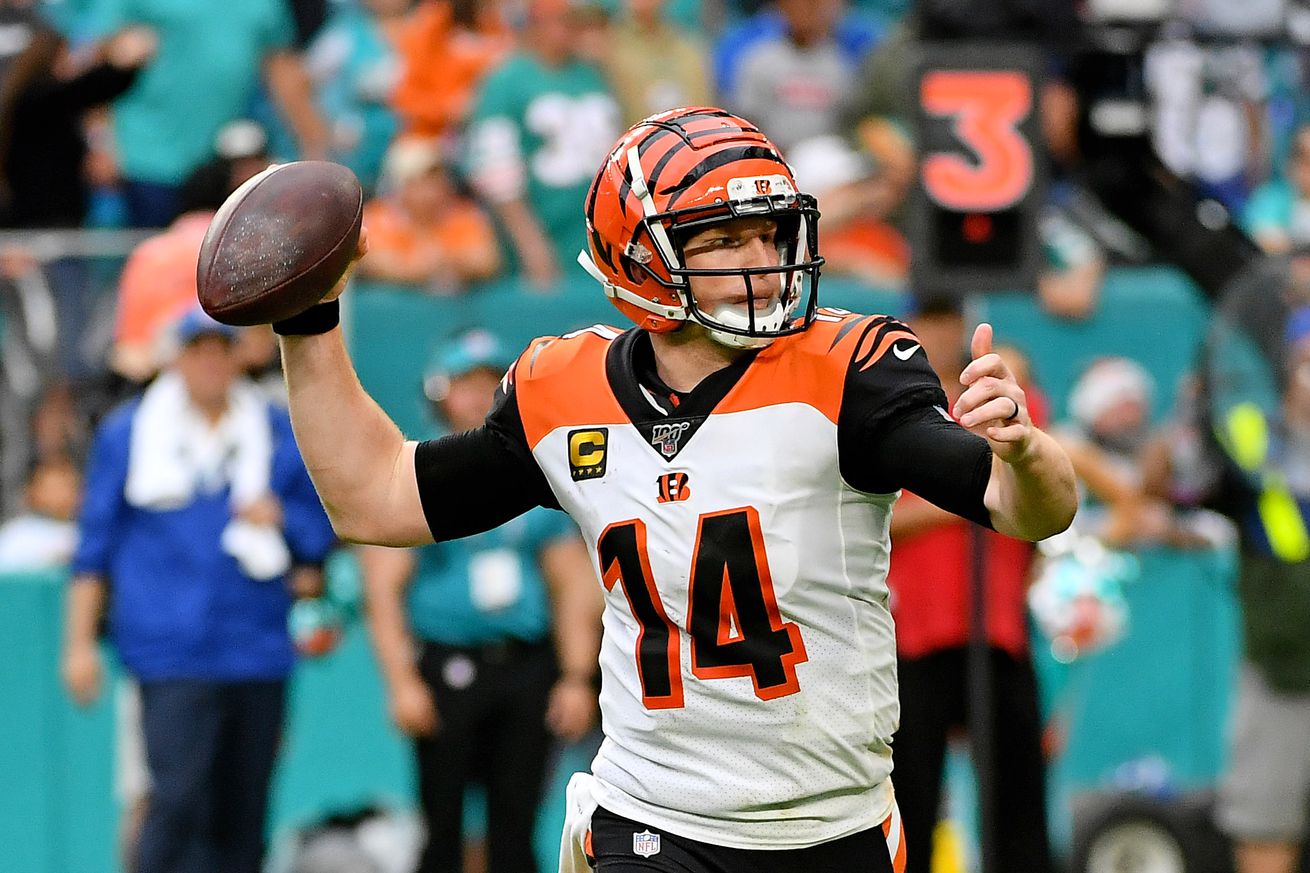 The Bengals trailed 35-19 when Andy Dalton dropped back to pass with 33 seconds to play. Dalton, playing in what may be his penultimate game with Cincinnati, faced fourth-and-goal from the Miami 3-yard line. ESPN had pegged his team’s win probability at a scant 0.01 percent.

Less than a minute later, the Dolphins and Bengals — the AFC’s two worst teams — were preparing to take Week 16’s most exciting game into overtime.

Dalton’s four-touchdown performance in regulation willed Cincinnati back from a 35-12 fourth-quarter deficit and made Bengal fans simultaneously thrilled and concerned. The club, one loss away from clinching the top spot in the 2020 NFL Draft — and drafting Dalton’s potential replacement at No. 1 — put together one of the most improbable comebacks the league has seen this decade. And it all took place in a game few people outside of southern Florida and southwestern Ohio could find on their TV sets.

So how did this all happen? Let’s skip ahead to the fourth quarter and break it down.

We’ll start here. Gaskin’s dive gave Miami its biggest lead of the day. He did so despite being roughly 60 percent of the size of the guy who scored the Dolphins’ first touchdown of the day: defensive tackle Christian Wilkins. This lead appears safe; the Bengals had scored only a single touchdown and gained 230 yards in the first 48 minutes of the game.

The win probability indicator begins to pack up its things and dream of a nice Sunday evening in the tub with a glass of red wine. It’s three days from retirement. Life is great. Aside from Super Bowl 51, he’s had a distinguished career in football intelligence.

The Bengals responded, but took their time doing so. Dalton’s touchdown pass capped off a five-minute drive that made this a two-possession game. Cincinnati would have to stop the Dolphins or recover an uncharacteristic amount of onside kicks while maintaining a perfect record on two-point conversions to tie this game.

The win probability chart flinches briefly. “Just a misread, I bet,” brushing off the latest blip on its radar. He does not hear the wolves howling outside his door. Rats are deserting his ship. He is blithely unaware.

Rather than effectively ending the game, Sanders’ missed field goal gave the Bengals new life. Dalton got the ball back at his own 37 with nothing but some wild ideas in his head. At this point, he’s building his resume for an uncertain future. If the Bengals are going to draft Joe Burrow in 2020, he doesn’t have to make it easy for them. The Red Rifle mounts up.

The probability chart doesn’t care. Two more minutes ticked off the clock, burning all three of the Bengals timeouts with them. An ominous whistling has permeated through the air like black ink dropped into a glass of water.

It took nearly three minutes, but Dalton got the first touchdown he’d need. With no timeouts remaining, Cincinnati now needed to recover an onside kick, drive 50ish yards, and then convert a two-point conversion for overtime.

“The Bengals have a 7 percent shot of pulling off this onside kick,” the win probability chart thinks to itself. He does not hear the bombers approaching overhead.

ONE SECOND LEFT. AGAINST MIAMI’S PREVENT DEFENSE. THIS CAN ONLY BE THE PRODUCT OF TWO TANKING TEAMS SMASHING INTO EACH OTHER LIKE UNMOORED CRUISE SHIPS.

But that’s not all! Dalton still needs two more yards to send this game into overtime. OH MY GOD HE’S GONNA DO IT HIMSELF. PANDEMONIUM.

The walls have collapsed on the win probability chart. All the other advanced stats — DVOA, S&P+, even yards after catch had all safely retreated to their bunkers. Win probability, crawling out of the rubble, makes one last call on his radio. He has only two words to utter with his dying breath.

This gave way to overtime, where two streaking teams were set to battle it out like gladiators on the fie— oh wait, I’m being told they immediately reverted to their pre-fourth quarter forms as Division III football programs playing dress up.

The Dolphins’ win clinched the top overall spot in next year’s draft for the Bengals. It also dropped Miami all the way down to the fifth pick in the midst of a season the team was deliberately trying to tank. The real winner of this game was, in most outcomes, its on-paper loser.

But let us never forget the furious comeback Andy Dalton made in a meaningless Week 16 game in a showdown between two of the NFL’s worst teams. The win probability chart died for it.