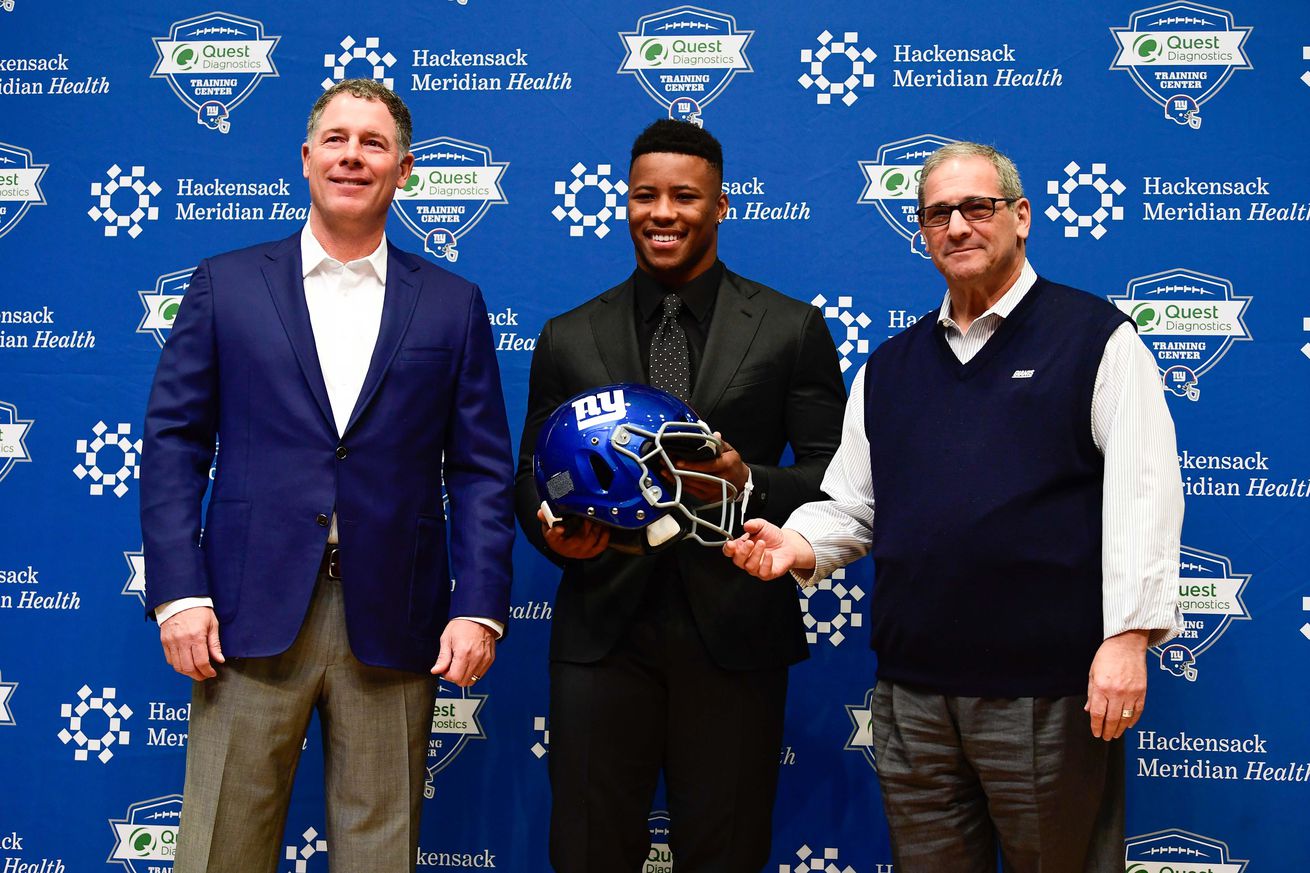 New York got rid of its best players and have an old quarterback. How can this be fixed?

With the trade of wide receiver Odell Beckham Jr. and defensive end Olivier Vernon from the Giants to the Browns, it signifies the beginning of a complete rebuild for New York.

In return, the Giants got guard Kevin Zeitler and safety Jabrill Peppers. More importantly, they got draft capital in the form of the Nos. 17 and 95 overall picks.

That’s critical for Giants general manager Dave Gettleman as he recreates a barren franchise that has only made the playoffs once since 2012 and gone 8-18 the last two seasons.

Here’s how the team can start to piece things together in this year’s draft.

A rebuild is hard to do with a 38-year-old starting quarterback. Fifteen years into his NFL career, Eli Manning is coming off tough season where he was criticized by Beckham for an inability to move the ball down the field. Having Manning as the face of the franchise moving forward is untenable.

The Giants are in a position in the 2019 NFL Draft to land Manning’s successor. There are a few ways they can go about getting their starting quarterback of the future.

1. The first one is the easiest, but most expensive. Gettleman can package pick Nos. 6 and 17 to get up to No. 2 overall to ensure they get Ohio State’s Dwayne Haskins. The old, and perhaps antiquated, Jimmy Johnson draft pick value chart puts the point total for New York’s two first-rounders at 2,550 points. The second pick is worth 2,600 points. Chase Stuart’s more modern trade chart on Football Perspective values New York’s picks at 39.8 points and the No. 2 pick at 30.2 points. That equates to a gross overpay, but for a quarterback it’s passable.

2. The second way is sheer hope. The Giants could hold with the sixth pick and hope that the Raiders, or some other team, doesn’t take Haskins before they can.

3. The third way is essentially going completely bonkers and don’t take a quarterback with the sixth pick. Instead, they could take one with the 17th. One name who has been connected with New York is Duke’s Daniel Jones. Sort of like the Beckham trade, the connection just won’t go away.

My partner @BuckyBrooks connected Giants to Duke QB Daniel Jones. They could go pass rusher at 6 and take QB at 17.

Then again, regardless of which path to a quarterback he chooses, it may be asking too much of Gettleman to do the right thing at the position. Just a year ago, he passed on Sam Darnold for a running back. And while Saquon Barkley is unquestionably great, he plays a grossly devalued position. Further, by the time the Giants are good again, Barkley could be approaching the end of his rookie contract.

4. There’s also the doomsday scenario. This, described by ESPN’s Ian O’Connor, is where the Giants could ride it out with Manning completely for 2019 and draft a quarterback in 2020.

The Giants need a lot more than just a QB

For as much as the team needs to find a franchise quarterback, the defense needs an overhaul.

The team let Landon Collins walk and the only free agent signings of note have been wide receiver Golden Tate and safety Antoine Bethea, who signed a two-year contract. Bethea has a familiarity with Giants defensive coordinator James Bettcher after playing for him in 2017 in Arizona. Although Bethea will be 35, the Giants are probably comfortable having him and Peppers as the team’s starting safeties. After them, the defense is in shambles, particularly in terms of a pass rush.

If the Giants take the patient approach with a quarterback and don’t select one until No. 17, they should be able to find a pass rusher with the sixth pick.

Senior Bowl and NFL Scouting Combine. Another pass rusher in contention at No. 6 is Rashan Gary of Michigan. The Giants met with him at the combine and could like his combination of size and athleticism to play the run and pass.

For the Giants, finding a viable pass rusher after the first round could prove difficult. Of the 22 players who had 10 or more sacks in the NFL last season, only seven were taken past the first round. If the Giants wait until their pick at No. 37 overall, players like Zach Allen of Boston College, Oshane Ximines of Old Dominion, and Charles Omenihu of Texas could be in play. If the Giants are looking for a direct replacement for Vernon as a combo linebacker/end player, they could be the team that stops a potential draft weekend drop by Florida’s Jachai Polite. He bombed the combine and it’s becoming difficult to see him as a first-round player.

New York has to get creative

It also doesn’t help that the Giants don’t have a lot of available salary cap space. Before signing Golden Tate to a four-year, $37.5 million deal, New York had just over $27 million available under the cap, according to Spotrac. That’s partly due to Beckham and Vernon having a combined $24 million cap hit for 2019.

New York could fill its opening at right tackle with a free agent. The Falcons are releasing right tackle Ryan Schraeder, and he could be an affordable option. Similarly, the Vikings released versatile lineman Mike Remmers.

In the draft, a potential option for the Giants is packaging the 95th pick and one of its two fourth-round picks to move up in the third round to fill the position. David Edwards of Wisconsin, Bobby Evans of Oklahoma, and Kaleb McGary of Washington are right tackle targets in that range. Or New York could use one of its three fifth-round picks on a right tackle. Players in that area of the draft could be Martez Ivey of Florida, Michael Jordan of Ohio State, and Yosuah Nijman of Virginia Tech. All six of those players are experienced and could push for snaps as rookies. More importantly, they’d be cheaper than a free agent.

How do you replace Beckham?

Tate will help somewhat — he was the best available wide receiver on the open market — but he’s no Beckham. He also saw a dip in his numbers last season between stints with the Lions and Eagles (74 receptions for 795 yards and four touchdowns). Former second-round pick Sterling Shepard will see his role increase, but maybe not by much. Shepard already saw 107 targets a season ago, catching 66 of them for 872 yards and four touchdowns.

After them, New York’s group of wide receivers is pretty grim. Bennie Fowler had 16 receptions, Cody Latimer had 11, and Russell Shepard had 10 last season. Oh, and they’re all free agents. The most productive Giants wide receiver who isn’t a free agent is Corey Coleman, who had just five catches in eight games played. Fortunately for the Giants, they have tight end Evan Engram, who is basically a big wide receiver.

N’Keal Harry of Arizona State is a physical outside presence. A.J. Brown of Ole Miss is capable of playing the slot and outside. Hakeem Butler of Iowa State is a big, imposing athlete who can help stretch the field.

All of them would start immediately for the Giants and be a key part of the team’s rebuild. As long as that might take under Gettleman.

4 thoughts on “How the Giants can start their rebuild, in 4 steps”