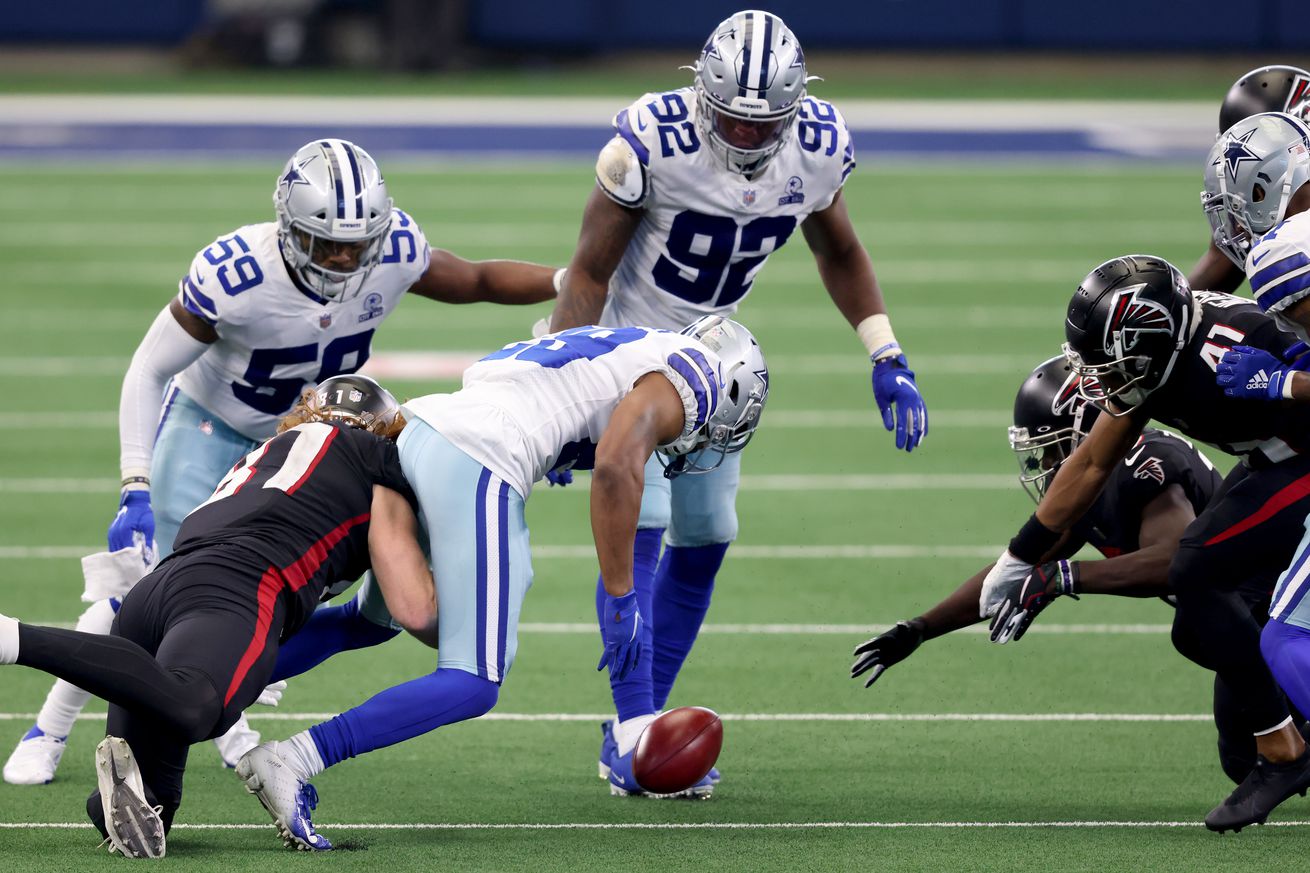 The Falcons and Cowboys both forgot how to football

Football is a very hard sport. That is why many people find other jobs. If you’re interested in becoming a professional athlete, good luck! Not only do you need to be physically strong but you need mental muscles to remember all those plays and assignments too.

But with games being so long, sometimes the athletes forget what they are supposed to do. I would like to introduce you to my new best friend: the onside kick at the end of the Falcons-Cowboys game.

The Cowboys recover the onside kick to give themselves a chance at the win!! pic.twitter.com/lzW5RHTLuD

It is genuinely impressive how many things had to go perfectly right and perfectly wrong to create such a moment. Atlanta reacted to the ball as though it was a flaming turd they wanted to corral without yucking up their clothes. The Falcons hands team forgot that the expectation for a hands team is that they use their hands. They did a great job watching the ball, seemingly judging it for its actions, but then let the Cowboys fall on it.

But when I started watching this over and over to point and laugh and feel better about my decision of sitting on my couch all day, I was met with a greater act of cluelessness. Let’s go through a few frames quickly.

So right here, things are going ok for the Falcons. The ball has only advanced five yards and they could fall on it. They chose not to which is a truth they’ve have to live with, but I want to focus on the Cowboys blur on the 41. He’s the closest Cowboy to the ball, #57 Luke Gifford. Luke is in great position to block a Falcon out of the play and help his team try to recover the kick.

Orrrrr he could just run past all of them and give Atlanta a numbers advantage. Now, this is a good frame to point out where the Falcons really missed their chance, but everyone else is laughing at them so let’s leave them be for the moment. This is Luke’s time to be the star!

He just keeps on going.

As everyone on the field and at home focuses on the ball, Luke has nearly left the screen.

That’s the last frame we see any of Luke. Goodbye new friend!

And then the Cowboys fall on it. Yes, the Falcons had at least three players who could have ended things had they remembered to do their jobs. But in a comedy of errors, neither side could be spared. It seems like the only guarantee that comes with an onside kick is that there will be something to laugh at.

For years now, a lot of conversations have been had about the onside kick. It went from dangerous to pointless and Jon makes the best argument for how it should be replaced.

But c’mon, it’s the NFL. They’re not going to just strip something they’ve always done for something new and reasonable! Instead, rule changes for player safety have also reduced the onside kick to a play that if it works for the kicking team, it most likely leaves the receiving team looking very foolish. They’ve become harder and harder to pull off — unless you are (ironically) the Atlanta Falcons. Their kicker Younghoe Koo owned the last three successful onside kicks (including two in one game on Thanksgiving 2019, with a third negated by a penalty).

My belief is that the idiocy witnessed in the Cowboys-Falcons game is the same idiocy that has allowed Koo to become such a good onside kicker. Who has he gone up against to perfect his onside kick? That exact same hands team that allowed the Cowboys to come up with the ball. Through their “Three Stooges” routine, Koo and the kicking team have been able to build up their confidence, which has turned into success on the field.

And before you run to the comments to say, “that makes no sense,” well, I know that. But neither does what the Falcons did. This is a thought exercise to justify professional athletes forgetting how to athlete professionally.

It’s a foolish exercise to justify anything from that play. We should all just listen to Alex Rubenstein and move on.

Now, go give a Falcons fan a socially distanced hug.