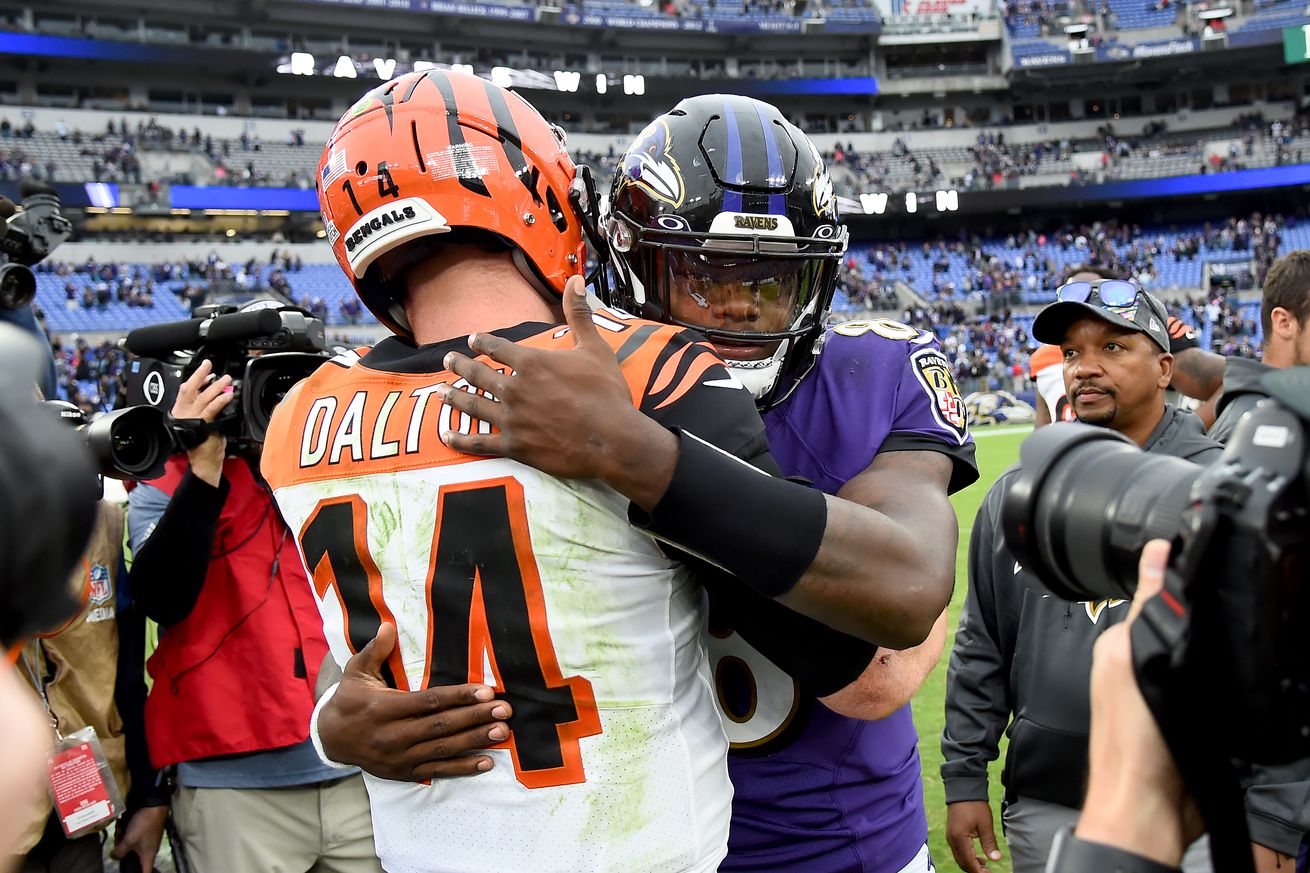 Dalton was scout team Lamar Jackson for the Bengals. It did not help.

The Bengals were completely unprepared for Lamar Jackson in Week 10. The Ravens’ quarterback and MVP candidate ran roughshod over a winless Cincinnati team. Jackson threw more touchdown passes (three) than incompletions (two), recorded a perfect 158.3 passer rating for the second time in his budding career, and ran for 65 yards — most of which came via a video-game highlight reel 47-yard touchdown run.

.@Lj_era8 pressed all the buttons on this run
(via@ NFL)pic.twitter.com/CsPVww96UA

Baltimore went on to win that game, 49-13, continuing Cincinnati’s undeniable path to the top of the 2020 NFL Draft in the process. So how were the Bengals so wholly unable to adjust to Jackson’s dual-threat capabilities? It maaaaaay have all started in practice, where the team’s big ploy to prepare for Jackson’s unique skillset started with running Andy Dalton on the scout team.

[Dalton] joined the captains for Sunday’s coin toss after a week the nine-year starter gladly was one of the scout team quarterbacks trying to simulate Ravens quarterback Lamar Jackson. They tried to get ready for Jackson’s speed with stand-ins being the practice squad wide receivers and for his savvy with Dalton.

That’s right, the Cincinnati defense prepped for the most dynamic running quarterback the league’s ever seen — through 1.5 seasons, at least — by chasing down a 32-year-old with fewer rushing yards in his nine-year NFL career (1,203) than Jackson had in his first 16 starts as a pro (1,247). While the veteran wasn’t the only player to take to the backfield in order to confuse the Bengals’ linebackers — Geoff Hobson’s report also notes several wide receivers and running backs took snaps in order to emulate the elusive QB — he was almost certainly the slowest.

The Bengals’ strategy failed to pan out … but could it have gone worse? Dalton stepped up even after being benched on his birthday to help a hopeless team get better (or at least attempt to). Which quarterbacks who began the 2019 season as starters would have been an even worse ersatz Lamar Jackson?

Ignoring Roethlisberger’s current elbow injury, the lumbering veteran is elusive in a much different way than Jackson. Big Ben stays alive in the pocket because he has the body type of a Weeble. Jackson escapes pressure because he’s, you know, fast.

Garoppolo has run for 1.1 yards per carry this season. One out of every 87 of his rushes results in a torn ACL.

The good news: he knows firsthand what Jackson is capable of, having lost his starting job in Baltimore to him.

The bad news: since 2015, he’s run for fewer yards (200) than Jackson had in Weeks 6 and 7 this year (268). He’s also on injured reserve with a neck injury, which further crimps this terrible plan.

We all remember this, right?

Career yards per carry: 1.8. Manning finished his 2016 campaign with -9 rushing yards. Head coach Pat Shurmur tried to roll him out on fourth-and-short in Week 1, and this happened:

He truly is Bizarro Lamar Jackson.