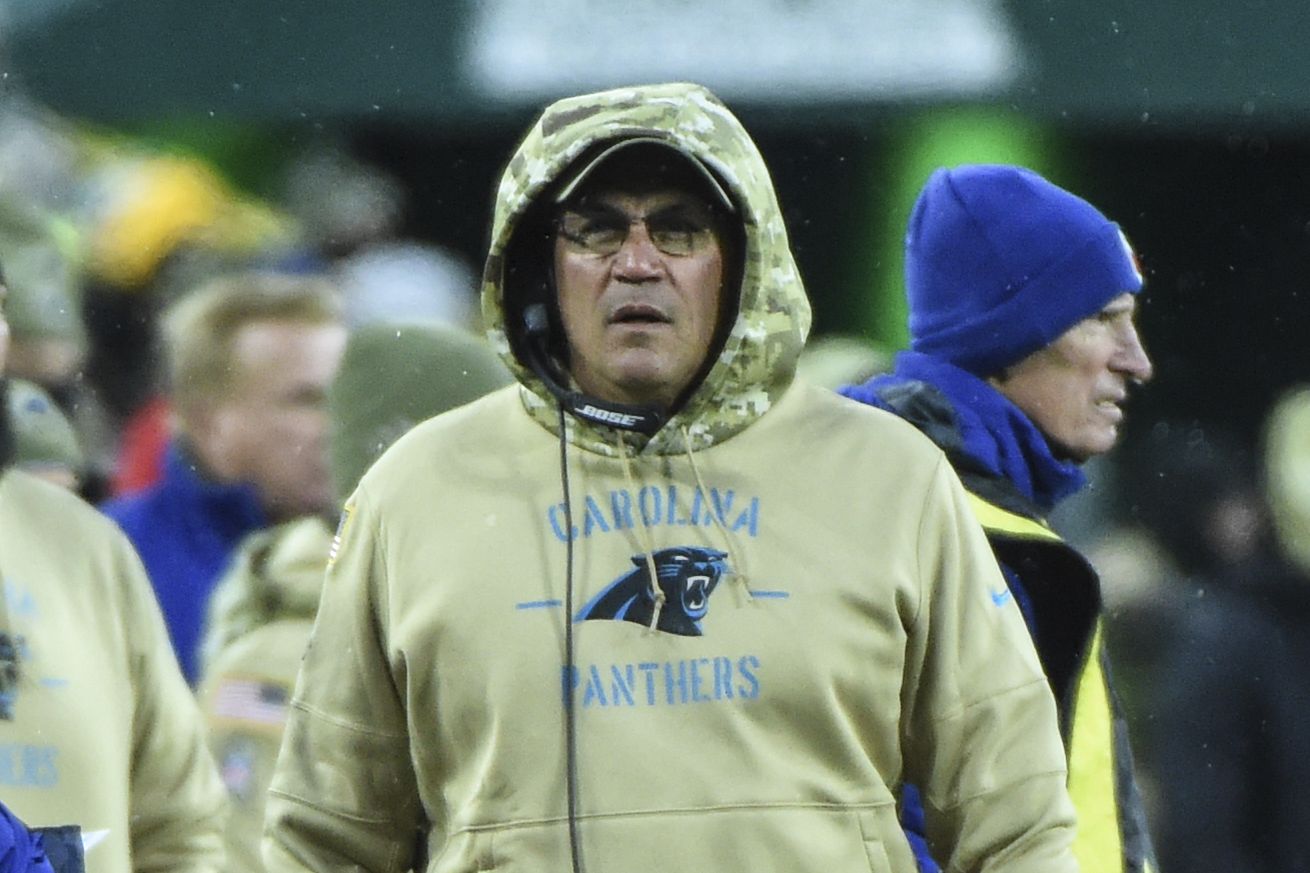 Ron Rivera has seen plenty of hard times in his nine years as head coach of the Panthers. But Week 12’s come-from-ahead loss to a hapless Washington team may have been rock bottom.

Carolina struck out to a 14-0 lead at home against a formerly 2-9 team, then gave up 29 straight points to rookie quarterback Dwayne Haskins and a pumped-up Derrius Guice. All was not lost, however. The Panthers rallied to create an opportunity to tie the game with a first-and-goal situation from the Washington 1-yard line late in the fourth quarter.

Rivera’s team lost 30 yards from there, culminating with … whatever this was.

That locked down Washington’s third win of the season and a 5-7 record for the Panthers. The loss was the team’s fourth in a row in fifth in its last six games. It all put eliminates Carolina from the playoff race.

And now it’s time to ask: will Rivera survive the offseason? Should he?

Ron Rivera and Cam Newton have thrived in the past. Do they deserve one more ride?

But 2018 was a function of a limited supporting cast and an 80 percent Newton. In 2019, the former MVP limped through only two games before being replaced by an undrafted second-year quarterback and eventually going on injured reserve. Kyle Allen’s success this fall has been a testament to the upgrades Carolina’s made up and down the roster — but those upgrades were made with Newton in mind, and now there’s a chance we never see him take advantage of them at full strength.

That would be a shame. Imagine a totally healthy Cam Newton flanked by the MVP candidate version of Christian McCaffrey. He’d give way to a receiving corps led by a coming-into-his-prime D.J. Moore (on pace for 1,300 receiving yards in his second season) and a still-improving Curtis Samuel. While Newton may never return to his 2015 peak, surrounding him with playmakers capable of sharing the load should make him an above-average quarterback once more. That’s a foundation from which this offense can build.

James Dator: There’s a lot to admire about the Ron Rivera era in Carolina. A fierce, player-first coach was the necessary departure the team needed after a decade of floundering. John Fox’s milquetoast coaching was as underwhelming as it was often ineffective. But though Rivera was a breath of fresh air, that doesn’t mean we need to cling to the past.

Injuries, departures, underperforming players — every team in the NFL needs to deal with these challenges. It consistently feels like Rivera is utterly incapable to adapt when things go wrong.

The most recent incident is by far the biggest indictment, with Cam Newton being forced to plan on a Lisfranc injury for weeks out of fear that the season might collapse if he was placed on injured reserve. Of course, that ended up being the case, but it’s that lead up that never should have happened. The second it became apparent that Newton was hurt beyond natural repair the Panthers should have moved on, done their best to salvage the season, and most importantly allow Newton to fully recover in preparation for 2020.

Instead, Rivera danced around questions about his quarterback, allowed Newton to get thrown under the bus when he was playing like garbage on a hurt foot, and backfilled the season with excuses. We don’t know whether perception matched reality, but it all reeked of a coach trying to save himself at the expense of the team.

How will ownership address the Panthers’ other gaping concerns?

D’Andrea: Getting the star QB back doesn’t address the other massive problem Rivera faces: a defense that allowed a punchless Washington team to score 29 points in Week 13. Carolina ranks 22nd in the league in projected cap space for 2020, so landing impact talent in free agency will be difficult (but not impossible) — especially with the team’s lasting need for offensive line upgrades. Fortunately for Rivera, the latest collapse should provide the draft capital to pick up some starting talent on the defensive side of the ball.

Owner David Tepper has been impressively patient with the team since taking the reins from Jerry Richardson in 2018. Tossing out Rivera and Newton (who only carries $2 million in dead cap next year) — it seems like any fresh start would likely mean discarding both — would be throwing away an asset that still holds value. Maybe the charge is gone from that Newton/Rivera battery, but past results suggest they’ve still got some life to them.

Dator: It’s become abundantly clear that Rivera has traveled down the same road to the point now where he too is unable to get the job done. We’re about to see the end of the ninth season with Rivera at the helm. At no point have his Panthers been able to piece together back-to-back winning seasons. Sure, there are excuses to justify keeping him around, but there have been ceaseless, endless excuses every time the Panthers fail. Eventually nobody can keep going back to the same well and keep their job.

Tepper has yet to make a serious statement since taking over as team owner. This is his chance to truly leave a mark and back up statements he’s made about not tolerating mediocrity.

Advocating for anyone to lose their job always makes me feel gross, but here we are. Rivera is still a great football coach, and I fully believe he can do a great job somewhere else. He’s run his course in Charlotte, though. It’s time for Tepper to make a change and usher in a new, modern approach to the NFL, one that doesn’t lean on Rivera’s old-school defensive knowledge and Norv Turner’s antiquated approach to offense.

The biggest indictment I’ve had with how the Panthers have handled Newton so far is that it’s felt like a Ferrari has been given to a staff only capable of driving a Ford Fiesta. It’s time to swing for the fences and go for it; otherwise the only thing that’s in the future is another set of disappointing seasons with no effective end to the madness.

What would the Panthers look like without Rivera in 2020?

D’Andrea: Two questions for you, James. The first: what do you think Newton still has in the tank (and will he be Carolina’s QB in 2020)?

Dator: Newton is only 30, and it’s easy to overlook that because of injuries and how he plays the game. That said, I expect that if he’s able to recover from his foot injury he’s going to be very, very good for someone. Look at this NFL season: A large part of why Lamar Jackson is garnering justified MVP buzz is how he’s able to extend plays with his legs, while teams still need to respect his arm. This isn’t dissimilar to Newton. And while their running styles are vastly different, more and more NFL minds are accepting the idea of dual-threat quarterbacks. Or at least pretending they are.

I’ve said before that the Panthers parting ways with Newton would be the biggest mistake in team history. I stand by that. In the end it’s going to come down to a balance of Newton’s health and his cap figure. If that balance is out of whack in favor of his cap number then I expect the Panthers to move on — especially if they pick a new coach.

D’Andrea: The second: what kind of coach would you like to see take over in Charlotte?

Dator: That’s tricky. Admittedly I’m not one of this people who pores over coaching circles to predict who might be available, but it’s time for a youth movement in Charlotte. In team history, the Panthers have never had anyone from an offensive background as head coach. Jerry Richardson always believed in defense first, which has led to stagnant offensive thinking.

I just want some new thinking in Carolina before it’s too late to take advantage of the exciting players on the roster.

What does the future hold for Rivera if he’s not in Charlotte?

Dator: Two questions back at you. The first: Say Ron Rivera gets fired. Is there another NFL team you see hiring him to a head coaching job?

D’Andrea: I think Riverboat Ron would take a year off, hit the pregame talk show circuit, and patiently wait for Matt Nagy to overanalyze his way out of Chicago before a return to the team he called home for nine seasons as a linebacker. Would he be an upgrade over Nagy? I’m honestly not sure! Still, his ability to move on from his gambles and mistakes would be a strong departure from Nagy, whose fixation on his team’s flaws has manifested throughout his playcalling.

Dator: What do you think the tipping point should be where the Panthers move in a different direction?

D’Andrea: Rivera’s 2020 tipping point, assuming he makes it there, would be any sustained losing streak. His biggest flaw as a head coach has been his inability to pull his team from regular season death spirals. He’s lost at least four straight games in three of his last four seasons and five of his last eight. If his trajectory dips again in his last chance season, Tepper would be entirely justified in making a midseason switch on the sideline.