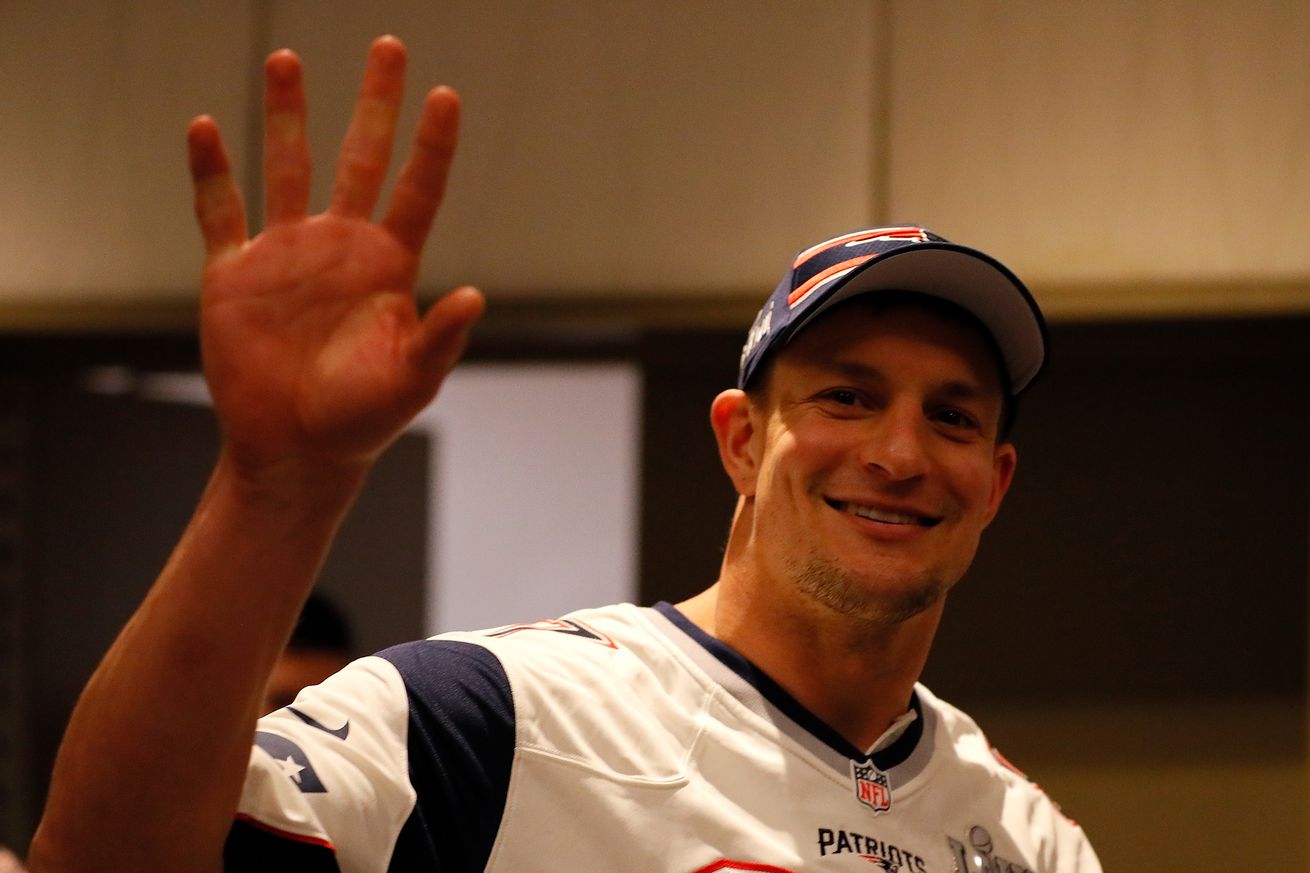 Rob Gronkowski’s lofty salary cap hit in 2019 may mean he doesn’t get to play with the Patriots again even if he decides not to retire.

Rob Gronkowski has only played in nine NFL seasons with 100 regular season starts and another 16 games in the playoffs. That’s a long time, but it isn’t even close to the 16 and 17 seasons that Antonio Gates and Tony Gonzalez played, respectively.

That’ll inevitably matter in “Greatest Tight End Ever” debates, because it’s really possible that Gronkowski won’t play a 10th season in the NFL. And even if he decides he wants to play another year, the Patriots may decide Super Bowl 53 was his last game with the team.

Regardless, Gronk has a very real case as the best ever at his position.

Since arriving as a second-round pick for the Patriots in 2010, he has played football like a T-800. Gronk’s been bigger and stronger than whatever poor defender has been given the unfortunate assignment to cover him. It got him a ridiculous 74 touchdowns (including the playoffs) before he even turned 27. It took Gates — the all-time leader in touchdowns for a tight end — until he was 31 to reach that number.

Why would Gronk consider retiring?

The downside to Gronk’s fearless play is that it has been more than enough to accumulate a long list of injuries. He’s had surgeries to repair his knee, his forearm, and he’s had several operations on his back — which started giving him problems in college.

Now, he’s a few months away from his 30th birthday and he’s basically held together by duct tape. Gronk caught only three touchdowns during the regular season and tallied 52.5 receiving yards per game — his lowest average since his rookie year. The playoffs showed he can still make a difference when it matters most, but it looks like his best, most dominant days are well in the rearview mirror.

He was asked days before the Super Bowl if retirement is a possibility, and gave a perfectly Gronk answer. Via NFL:

After the game, he still wasn’t ready to answer.

Gronk on his future: “That decision will be made in a week or two.”

Last year, he spent a couple months considering retirement after Super Bowl 52. He also threatened to walk away when the Patriots came close to trading him to the Detroit Lions.

That means you shouldn’t be surprised if Super Bowl 53 was the last game for Gronkowski in New England — and possibly, the NFL.

Gronk’s contract will be too expensive for the Patriots’ taste

The Patriots aren’t exactly sentimental. Many of the most important pieces of their nearly two-decade reign of terror have been shipped off or released before they got too expensive to keep around.

Logan Mankins, Richard Seymour, Wes Welker, Vince Wilfork, Ty Law, and Mike Vrabel are just a few of the Patriots legends who had to finish their NFL careers elsewhere.

So it wouldn’t be surprising at all if the Patriots decide Gronkowski’s $11.86 million salary cap hit in 2019 is too high. It would actually be shocking if they didn’t. He’s one of only four tight ends in the NFL — along with Jimmy Graham, Zach Ertz, and Travis Kelce — due to count more than $10 million against his team’s salary cap next season.

New England can recoup $9.86 million of that cap space by parting ways with Gronkowski. That’d make sense, because — save for a few flashes of his former self — Gronk has mostly looked like a tight end worth a fraction of his current price tag.

It doesn’t help either that the Patriots reportedly believe Gronkowski’s preparation for the 2018 season is partly to blame for his difficult year.

Did Gronk hurt his own cause before the season even got going? #Patriots pic.twitter.com/5hzAJdcBbv

“Internally, the Patriots feel like Gronkowski brought some of this on himself,” NFL Network’s Mike Giardi said Sunday of Gronk’s recent injuries. “When he reported, he came in not as strong, not as fast, and not as explosive. While he had a very good first game against the Houston Texans, then — all of a sudden — the injuries popped up to the ankle, to the Achilles, and to the back.

“The Patriots feel as though if he had maybe done it their way as opposed to the TB 12 way — of which Gronk is devoted to — maybe things would’ve been different.”

It’s possible the Patriots will ask Gronk to take a pay cut to bring that salary hit down. But that’s asking a player who is already verging on retirement to come back for more punishment at a discount price.

Will Gronk be willing to return for less, or for a different team?

The 2011 season is the only time in Gronk’s career that he started all 16 regular season games. He missed three games this year, two last year, and eight the year before that.

It’s not often that a player retires at age 30, but not many have taken the punishment Gronk has in such a short amount of time. Here’s a quick recap of the injuries he’s accumulated in the NFL:

All that punishment makes his 2018 contemplation of an early retirement perfectly understandable. He also reportedly dealt with Achilles tendinitis, an ankle problem, and a bulging disc in his back this season. It makes you wonder if he’d want to come back even if the Patriots wanted him back for nearly $12 million.

They probably won’t, though. Will he be further dissuaded from another year of NFL hits if the Patriots try to pay him less? And would he be willing to play for another team if he’s released or traded?

Gronk’s already said that he doesn’t want anybody throwing passes to him except Tom Brady.

Rob Gronkowski confirmed he threatened to retire when the Patriots considered trading him to the Lions: “Yeah, it happened. Brady’s my quarterback.”

If Gronkowski really is done, it’d likely be a rare case when a truncated NFL career was still enough to deserve a spot in the Hall of Fame. That tremendous, but relatively short run with the Patriots may end Sunday with one last game against the Rams.