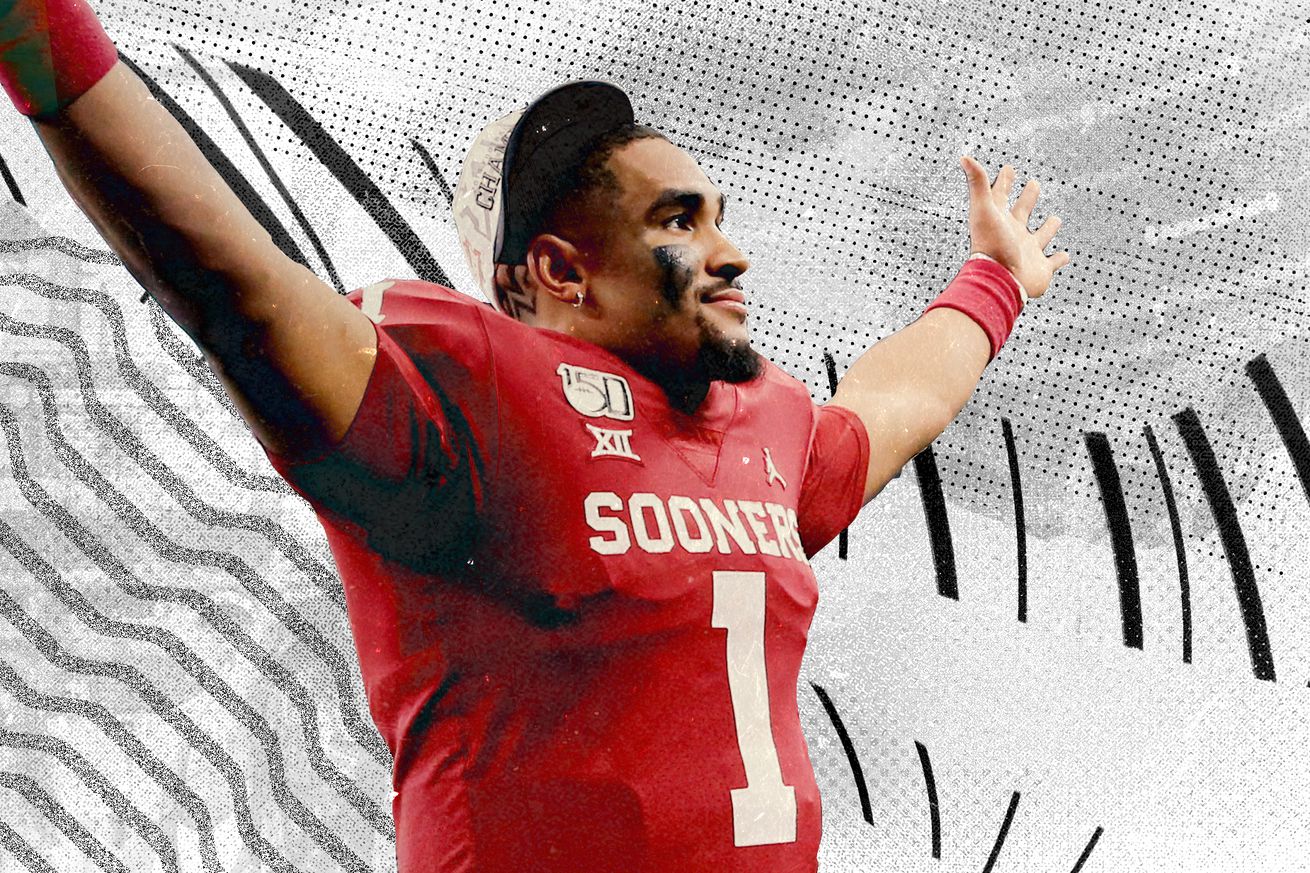 Jalen Hurts was 38-4 as a starter in college, but will he be a winner in the NFL too?

No player has ever had a college football career quite like Jalen Hurts.

Hurts spent most of his junior season on the bench as Tagovailoa’s backup. Then Hurts had his turn to come to Alabama’s rescue when Tagovailoa went down with an injury in the 2018 SEC Championship Game. Hurts led a come-from-behind victory to secure a spot for the Tide in the College Football Playoff.

That’s when Hurts’ collegiate career pushed itself into unprecedented territory. With Tagovailoa set to start for Alabama again in 2019, Hurts left to join Oklahoma as a graduate transfer.

Hurts put up gaudy numbers in Lincoln Riley’s always prolific Sooners offense. He finished the year with 3,851 passing yards, 32 passing touchdowns, 1,298 rushing yards, and 20 rushing touchdowns, all career highs. Even though his season didn’t end with a trip to the national championship game for the first time, he still led Oklahoma to the College Football Playoff and was the Heisman Trophy runner-up.

Unlike his Oklahoma predecessors Baker Mayfield and Kyler Murray, Hurts won’t be the first pick in the NFL Draft. He probably won’t even be a first-round selection. But his long track record of success makes Hurts a compelling option for teams looking for a quarterback on Day 2.

Does Hurts actually have what it takes to be a franchise quarterback? Let’s take a closer look.

Hurts has the accuracy to succeed in the NFL

But don’t let all that talent fool you. When Hurts let the ball rip downfield, it was usually placed right where it needed to be.

Few quarterbacks in college football were more accurate on throws at least 10 yards beyond the line of scrimmage. According to Football Outsiders’ Derrik Klassen, Hurts was accurate on 77.3 percent of his passes 11-15 yards downfield. Among top quarterbacks in the draft class, Joe Burrow was the next closest but at 66.2 percent.

Over and over, Hurts gave his skillful receivers opportunities to make plays:

One criticism about Hurts is other quarterbacks in the draft class — including Tagovailoa — have superior arm strength. But Hurts has shown he has enough arm to get the job done with deep balls:

That ball placement and Hurts’ acumen resulted in relatively few mistakes over his four seasons. His 191.2 passer rating in 2019 (a 128.9 rating with the NFL formula) was seventh-best in FBS history.

Hurts’ skills as a rusher are a bonus

Lamar Jackson earned NFL MVP honors after finishing the 2019 season with 1,206 rushing yards, a record total for a quarterback.

Thanks to Jackson, it’s a good time to be a dual-threat passer in the NFL. While Hurts isn’t as dynamic as Jackson is on the ground, his rushing skills add value to his draft stock now more than ever.

When a play breaks down, Hurts is always a danger to glide down the field on his own for a huge gain.

That attribute can help mitigate the parts of his passing skills that need development. That’s good, because there’s one big reason to be concerned about Hurts’ chances in the NFL.

Everything about Hurts’ passing needs to speed up

Oklahoma’s offensive line wasn’t quite as dominant in 2019 as it was during the Heisman campaigns of Mayfield and Murray. Linemen Cody Ford, Bobby Evans, and Ben Powers were all drafted in 2019, leaving an inexperienced group to block for Hurts.

As a result, the Sooners ranked 46th in the nation in pass blocking, per Pro Football Focus. What’s more concerning is that Hurts was pressured on 35.8 percent of his dropbacks. That ranked 92nd among college football starters.

While the line wasn’t stellar, that was mostly a product of Hurts holding the ball way too long. His average of 3.08 seconds ranked 103rd.

Far too often, Hurts needed to see a receiver break open before he let go of a pass. And sometimes waiting for those windows to open means they’d close before the football had a chance to arrive.

That lack of anticipation was exacerbated by a slightly elongated throwing motion that needs work in the NFL.

Hurts is going to have even less time to throw at the next level. There wasn’t a single NFL quarterback who averaged over three seconds per pass attempt in 2019. His receivers are also going to have a much harder time getting the type of separation that Lamb, Jeudy, Ruggs, and Ridley found against collegiate cornerbacks.

A speedier internal clock isn’t an easy thing to develop, and it could mean serious growing pains for Hurts if he’s forced to start as a rookie.

Hurts has the tools to eventually become a star

Hurts’ winding college career ended with a 38-4 record as a starter, four trips to the College Football Playoff, and nearly 13,000 combined passing and rushing yards. He probably won’t have to wait too long during the 2020 NFL Draft to hear from a team that falls in love with his extraordinarily impressive résumé.

At both Alabama and Oklahoma, Hurts showed he has the requisite passing skills to be an NFL quarterback. His slow pace in the pocket is a very legitimate concern, though.

Similar questions about Dak Prescott caused the former Mississippi State quarterback to fall to the fourth round in 2016 NFL Draft. He was drafted to be a long-term developmental project for the Cowboys, but was thrown into the fire as a rookie and has exceeded expectations. That’s a reason for optimism about Hurts. Still, Prescott’s surrounding talent in college wasn’t even close to what Hurts was working with, which left Prescott more room to grow.

Hurts probably won’t be following in Prescott’s footsteps and taking a team to the playoffs in year one. It could be a while before he’s ready to be a starter in the NFL. However, his long list of accolades at Alabama and Oklahoma make it hard to rule it out entirely.

The likeliest landing spot for Hurts is with a team that already has a starter in place. The Steelers, Packers, Colts, and Buccaneers are just a few squads that have aging starters and could use a young quarterback waiting in the wings. Time to develop could be all that it takes for Hurts to speed up his process.

If he can, Hurts could replicate his college success and become a franchise quarterback in the NFL after all.