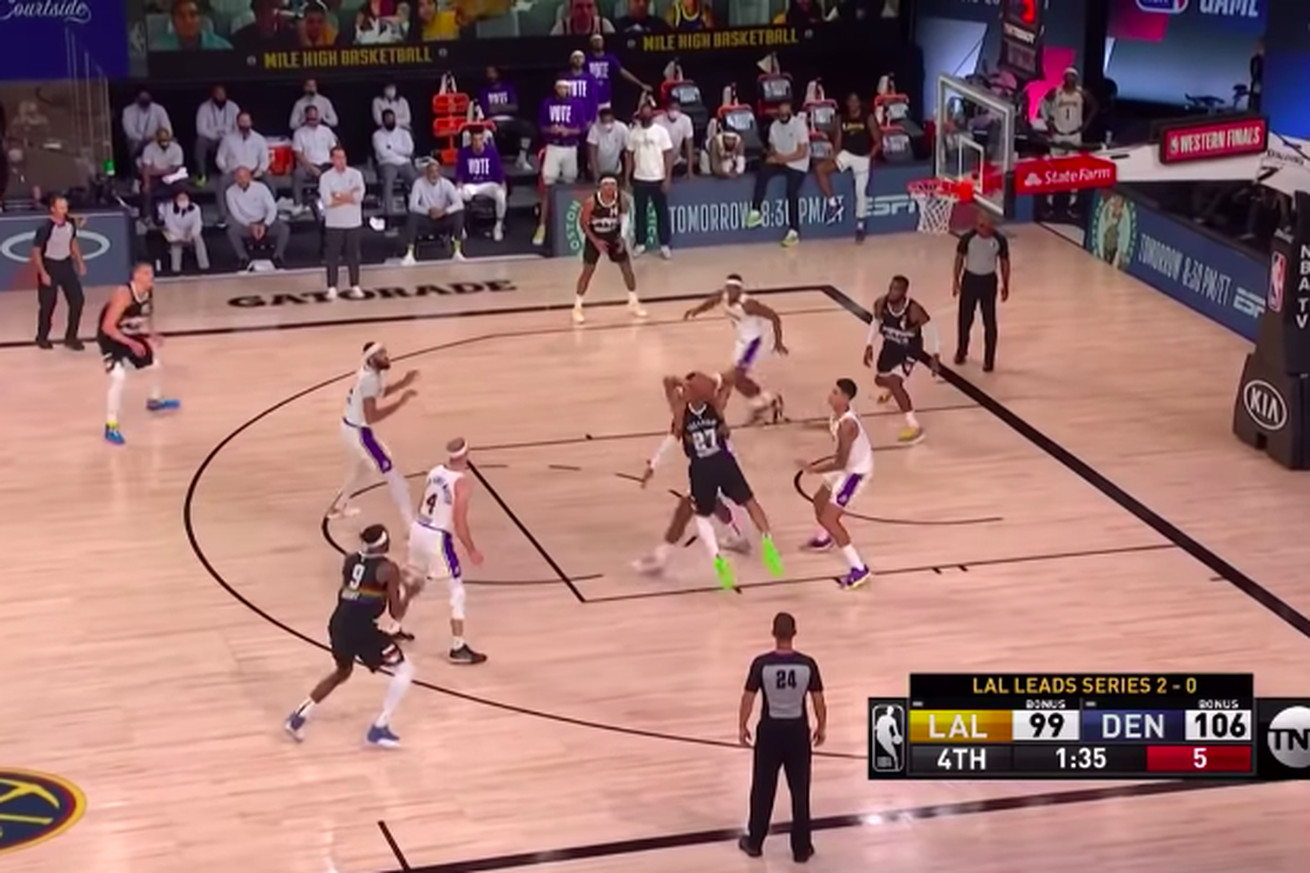 Murray hit two ridiculous threes in the final minutes, but this pass was his best play of the night.

The Denver Nuggets led the Los Angeles Lakers by 20 points early in the fourth quarter in Game 3 of their Western Conference Finals playoff series. Five minutes of game time later, the Lakers’ deficit was suddenly only three points. Los Angeles’ torrid run was powered by its defense, which used its physicality to force turnovers, score in transition, and turn a blowout into another nail-biter.

Denver, already facing an 0-2 hole in the series after Anthony Davis’ back-breaking buzzer-beater to end Game 2, had to execute in the game’s final moments to avoid being on the wrong end of a historic comeback. They put the ball in Jamal Murray’s hands.

Murray was brilliant in the clutch again, and Denver came away with a 114-106 win over the Lakers. Murray hit two ridiculous pull-up threes in the last 2:30 of the game, again delivering the type of clutch late-game shot-making that has become one of the signature trends of these playoffs. For as beautiful as Murray’s buckets were, his most impressive play of the night might have been a pass.

Murray had hit a step-back three to give Denver a seven-point lead with 2:17 left. After a Lakers turnover, Los Angeles trapped Murray in the paint on the next Nuggets possession. That’s when he rose to fire a jump pass to teammate Paul Millsap for an assist that iced the game. Watch the play here:

Beautiful late find from Murray to Millsap when Rondo leaves him to get out to Harris in the corner. Not sure he makes that pass last year pic.twitter.com/4tSs0z2PJZ

Basketball coaches at every level hate jump passes, but sometimes the unwritten rules of the game need to be broken in the biggest moments. Murray’s improvisation here helped Denver win the game.

Murray had LeBron James and Kyle Kuzma pressuring him in the lane with 1:41 left. He had Gary Harris in the left corner spotting up for a three-pointer and he had Millsap in the dunker’s spot on the block on the same side of the court. Los Angeles’ Kentavious Caldwell-Pope had to guard both of Murray’s teammates. With pressure barreling down on him and the game on the line, Murray directed Caldwell-Pope to the corner shooter with his eyes only to fire the pass to Millsap for the easy bucket.

The freeze frame makes it look even more impressive here. Murray is fully pointing his body and the ball for the pass to Harris in the corner, only to adjust in mid-air to find Millsap. It takes remarkable poise and confidence to manipulate a defender like that in such a small window of time and space. Murray pull it off flawlessly.

To try that pass in that moment is just as much of an indication of Murray’s star-level jump in the postseason as any shot he’s hit.

On the next possession, Murray launched a three-point over Anthony Davis that was straight cash. Game 3 went to Denver, and now we have ourselves a series.

Murray’s pull-up shooting has been the obvious catalyst for his star turn. He’s gone from an average pull-up three-point shooter to a deadly one in the postseason. More quietly, Murray has also showed improvement as a passer, raising his assist percentage from 23 percent during the regular season to 29.86 percent in the playoffs. He’s not just hitting super difficult shots, he’s finding his teammates, too.

Murray’s rise has been one of the best stories of the playoffs. The Lakers got to see it up close in Game 3.