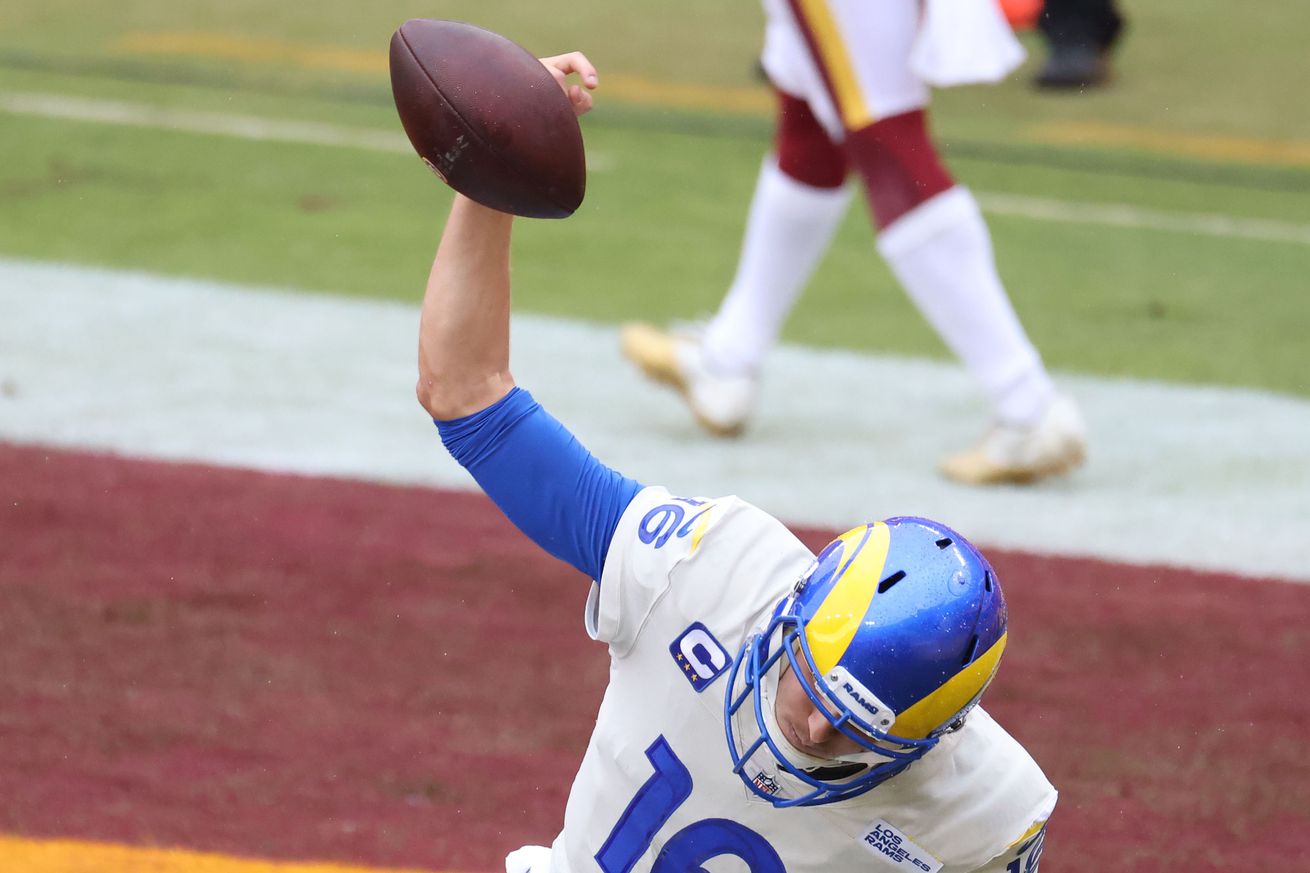 Here’s one way to ruin a touchdown celebration

It is October 11th, 2020. Our hero is Jared Thomas Goff, handsome leader/multi-millionaire/star quarterback for the Los Angeles Rams. His opponent? The Washington Football Team, whose name crimes have been downgraded from ‘hate speech’ to ‘perjury.’ The Rams winning, and they are winning easily.

Scoring a touchdown in a routine win against a team like Washington is probably less of an event to celebrate than a minor, forgivable episode of bullying. I suspect, however, that when you’re an NFL quarterback, with large, hyper-competitive angry defensive lineman literally employed to maul you, you may suffer from the occasional loss of perspective. Jared Goff celebrated:

I have some thoughts.

2. Are celebrations even real with no fans? Some NFL games are being played in front of spotty crowds, but this was not one of them. No Washington fans had to endure watching the Rams lazily steamroller through their beloved team. Without spectators, sports get weird, which is why TV networks are doing things like creating fake crowd noise.

Player celebrations are — or should be — a two-sided affair, a mutual, synchronized release of emotion between athlete and fan. Is that possible to achieve when one’s audience is abstracted away through lens and screen? Perhaps that lack of connection is what reduced Goff from ‘star football playing’ into ‘man flailing wildly at swarm of bees.’

3. Perhaps it was the rain.

4. Could this be the result of a flaw with Goff himself? There is a school of thought that suggests that Goff is being held back by his apparently-tiny hands. This is not a joke. As Riley McAtee at the Ringer notes, the pre-draft scrutiny around his nine-inch hands was so serious that he somehow contrived to grow them an eighth of an inch by pro day, bringing to mind some sort of tiny torture rack. But considering Goff’s small hands don’t stop him from being a pretty good NFL quarterback, it’s hard to imagine they’re interfering with his attempt to throw a football straight at the ground.

5. Another possibility is that Goff is imitating the smart-ass blogger attempting to make light-hearted fun of him online. Perhaps this was simply him imitating what it would look like if I tried to do his job. His thinking, I imagine, might have gone a little like this:

He’d probably plant his foot here — what a dork! — and he’d bring his arm over like he’d never even touched a football before and was terrified of the consequences. Said ball would escape from his grasp like he flees from human contact, futile longing for society overwhelmed by inadequacy and despair. And then he’d fall over.