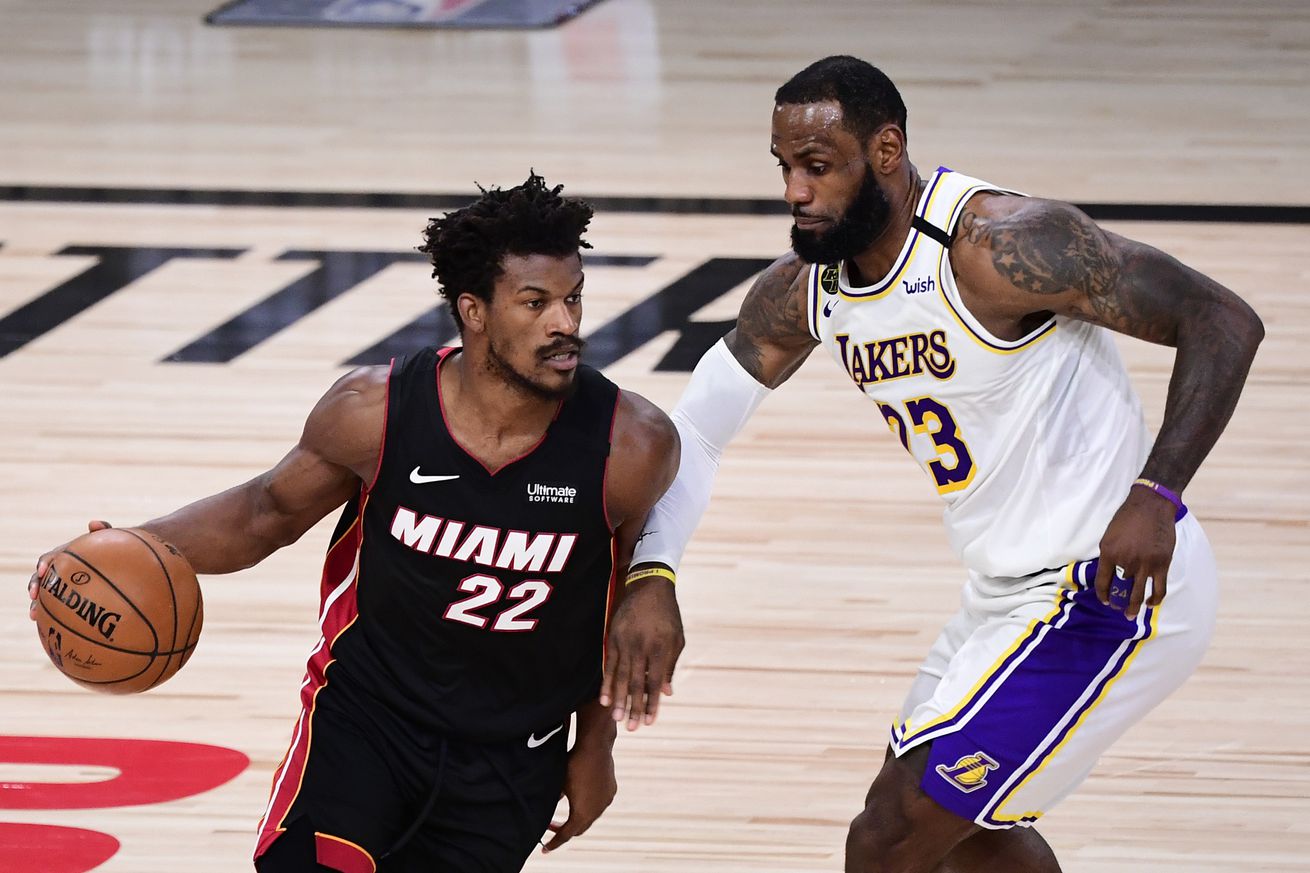 Butler’s 40-point triple-double on LeBron is one of the best NBA Finals performances you will ever see.

Before the Miami Heat and Los Angeles Lakers tipped off the 2020 NBA Finals, Jimmy Butler offered an honest and reflective assessment about the reality of being an NBA player chasing a championship for the last 17 seasons. “It’s been like this for a very long time,” Butler said. “If you want to win, you’re going to have to go through a LeBron James-led team.”

Butler knows it as well as anyone. He spent his formative years as a ironman wing for the Chicago Bulls with the assignment of slowing James at the peak of his powers. In his second season, Butler lined up against James and the Heat in a second round playoff series, averaging more than 44 minutes per night as Chicago lost a five-game slugfest. Two years later, Butler was a newly minted All-Star running up against James and the Cleveland Cavaliers. The Cavs would win a tough six-game series that turned on James’ incredible buzzer-beater in Game 4, but not before Butler held him significantly below his typical scoring efficiency.

At this point in his career, Butler is over moral victories. He was always going to need to be at his best for the Heat for a shot against James and the Lakers this year, and his burden became even bigger when Bam Adebayo and Goran Dragic were injured in Game 1. Suddenly Butler was without arguably his two best teammates and beginning the series in an 0-2 hole. Mostly everyone assumed Miami was about to be swept. Butler had other ideas.

The Heat pulled out a shocking 115-104 win in Game 3 of the NBA Finals because Butler played what has to be the best game of his illustrious career. Butler finished with 40 points, 13 assists, and 11 rebounds, dominating a game in which he didn’t even attempt a three-point shot. This was Butler in all of his glory, grinding his way to the free throw line (he made 12-of-14 attempts), flashing the passing chops he worked so hard to develop, and holding together the Heat’s defense even in their diminished state.

There have been better NBA Finals performances than the one Butler had in Game 3 against the Lakers, but not many.

It’s one thing to carry your team to a win in the NBA Finals without two critical co-stars. It’s another thing to do it by dominating a head-to-head matchup against LeBron James. James finished the night with 25 points, 10 rebounds, and eight assists — impressive numbers that belie the way Butler consistently bested him throughout the night.

How’s this for a stat: no one had ever finished with more points, assists, and rebounds than James in an NBA Finals game before Butler did it in Game 3. In case you forgot, this is James’ 10th appearance in the Finals.

Jimmy Butler is the first player to outscore, outrebound and out-assist LeBron James in a Finals game, including LeBron’s teammates. Via Elias.

Butler has ‘only’ averaged 36.8 points per game across Miami’s postseason run, but his workload in Game 3 must have reminded him of days under Tom Thibodeau in Chicago. Butler logged 45 minutes on the night, challenging James directly for much of it within the Heat’s multi-faceted defensive approach.

Butler didn’t just bulldoze James in a way that’s never really happened in his career before — he also reminded him of it as he was doing it. Butler was seen in the fourth quarter barking at James “you’re in trouble”. Butler said he was just repeating a phrase LeBron said to him earlier in the night.

Butler was never supposed to do this, not against LeBron in the NBA Finals without his two best teammates, not ever. While LeBron was a teenage prodigy who was already hanging out with Jay-Z and gracing the cover of Sports Illustrated as a high school junior, Butler was a completely off-the-radar recruit who couldn’t even get a DI scholarship. After a year of junior college ball, Butler transferred to Marquette, eventually became an All-Big East player, and did enough to be selected by the Bulls with the No. 30 overall pick in the 2012 NBA Draft.

Butler barely played at all as a rookie. In his second year, the Bulls were just hoping he could replace Ronnie Brewer as the backup small forward. After his third year, the team low-balled him on an early contract extension and eventually had to pay him a max deal. Butler always kept working on his game, one day showing up in Chicago saying he was a point guard. Most people rolled their eyes. He’s been one of the better players in the league ever since, blossoming into the ideal offensive initiator for the modern era even as he bounced between three hapless franchises in the Bulls, Timberwolves, and 76ers before finding the home he was always looking for in Miami. The Heat have gone from a lottery team to a conference champion in just one year, mostly because they acquired Butler.

Maybe Miami is still too overmatched if Adebayo can’t get back on the court. Maybe this will be a one-game blip on the way to an eventual Lakers championship. Just don’t tell Butler that. He’s been beating the odds his entire career.