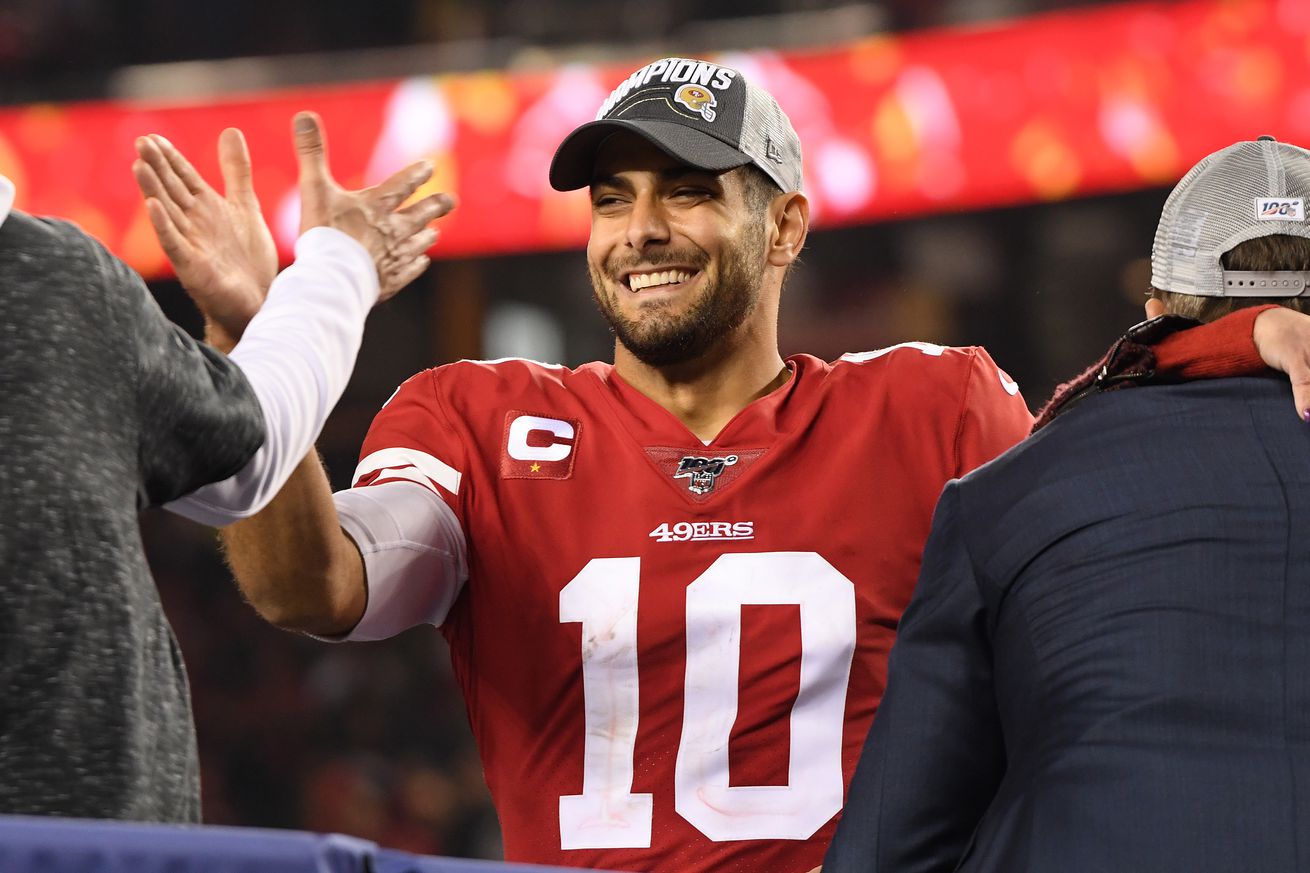 Jimmy Garoppolo attempted just eight passes in the NFC Championship Game. But you shouldn’t overlook him, and neither should the Chiefs.

The 49ers ran all over the Packers in the NFC Championship Game, amassing 285 yards on the ground. That says a lot about Raheem Mostert, the guy who did most of the running, as well as all of the players blocking for him. But what does it say about quarterback Jimmy Garoppolo, who attempted just eight passes in San Francisco’s dominant 37-20 victory?

Garoppolo threw for just 77 yards against the Packers, a week after he had 131 passing yards, a touchdown, and a pick in the Divisional Round. Meanwhile, the 49ers put up nearly 200 rushing yards against the Vikings in the 27-10 win.

Does it mean all the Chiefs need to do in the Super Bowl is figure out how to stop the 49ers’ ground game? Not exactly — though that would be a good first step.

The strategy of running, running, and more running did work very well for the 49ers, who got 220 yards from Raheem Mostert against the Packers. And it worked when Tevin Coleman rushed for 105 yards against the Vikings.

Garoppolo hasn’t exactly been a bystander this season, however. The 49ers haven’t needed Garoppolo to throw the ball in the postseason, but that doesn’t mean he can’t.

Garoppolo has already proven he’s a threat this season

Garoppolo had plenty of strong games throwing the football this season. He passed for over 300 yards three times, broke 400 yards once, had a passer rating above 100 nine times, had seven different games in which he threw for more than a single touchdown. He even threw for four touchdowns in three separate games, against the Saints and Cardinals (twice).

Drew Brees, and the 49ers still came out on top. In the 48-26 win, Garoppolo finished 26-of-35 passing for 349 yards and four touchdowns with one interception.

One of his touchdowns in particular stood out:

That play had Garoppolo rolling out away from the pressure and hitting his man — Kendrick Bourne — in the back of the end zone over the linebacker. That was key, given Garoppolo’s worst picks this season went to linebackers. It showed he can make a big play even when things don’t go particularly well off the snap.

With under a minute remaining, Garoppolo led the 49ers on a game-winning drive against the Saints, one of a league-high four fourth-quarter comebacks he had in 2019.

On the season, Garoppolo completed 69.1 percent of his passes for 3,978 yards, 27 touchdowns, 13 interceptions, and a passer rating of 102. The picks are a concern, though the numbers can be deceiving as several of those interceptions were off the hands of his receivers.

It’s not like he did NOTHING against the Packers

Garoppolo completed 6 of 8 passes for 77 yards while being sacked once against the Packers. He’s the first quarterback to win a playoff game while attempting eight or fewer passes since Bob Griese in 1974. Garoppolo went from the two-minute warning all the way until 8:10 of the fourth quarter — 94 minutes of actual time — without throwing a pass.

That was when the Packers started making a comeback, though. Green Bay’s touchdown on the previous drive made it a two-score game at 34-20. Right after that, Garoppolo went right to work. On the first play of the 49ers’ next possession, he delivered a 19-yard strike to George Kittle that moved the chains and took some time off the clock.

He also had a 10-yard pass to Mostert to help them move the ball on the same drive.

One thing to keep in mind is the complexity of the 49ers’ offense. Garoppolo is the point man for the whole thing, and it’s his job to make sure everyone is lined up correctly with all the moving parts that come from Kyle Shanahan’s offense.

Don’t forget just how much Shanahan loves to use motion. It’s a lot:

The NFL average jumped 4% to 47% this season, and SF is 30% clear of that. Crazy usage levels. pic.twitter.com/gXb9MtDR5N

Of course, lining up your team correctly and not screwing everything up in the process is expected of all quarterbacks, but it’s at least a LITTLE BIT tougher when your coach doesn’t believe in standard NFL formations.

This is Shanahan’s offense and Garoppolo is driving it. It will always rely on a committee of players, from the running of Mostert to the blocking of Kittle to the receiving of guys like Bourne, Emmanuel Sanders, and Deebo Samuel.

The Chiefs shut down Derrick Henry in a way that looked impossible, but a more complete team than the Titans could have responded. Ryan Tannehill wasn’t enough to overcome the league’s sixth-most efficient pass defense, and the Chiefs walked away with a win.

That said, they haven’t faced an offense as varied as Shanahan’s. The 49ers have a ton of ways to win. If the Chiefs sell out to stop the run in the Super Bowl, Garoppolo has proven he can take over when his team needs him.