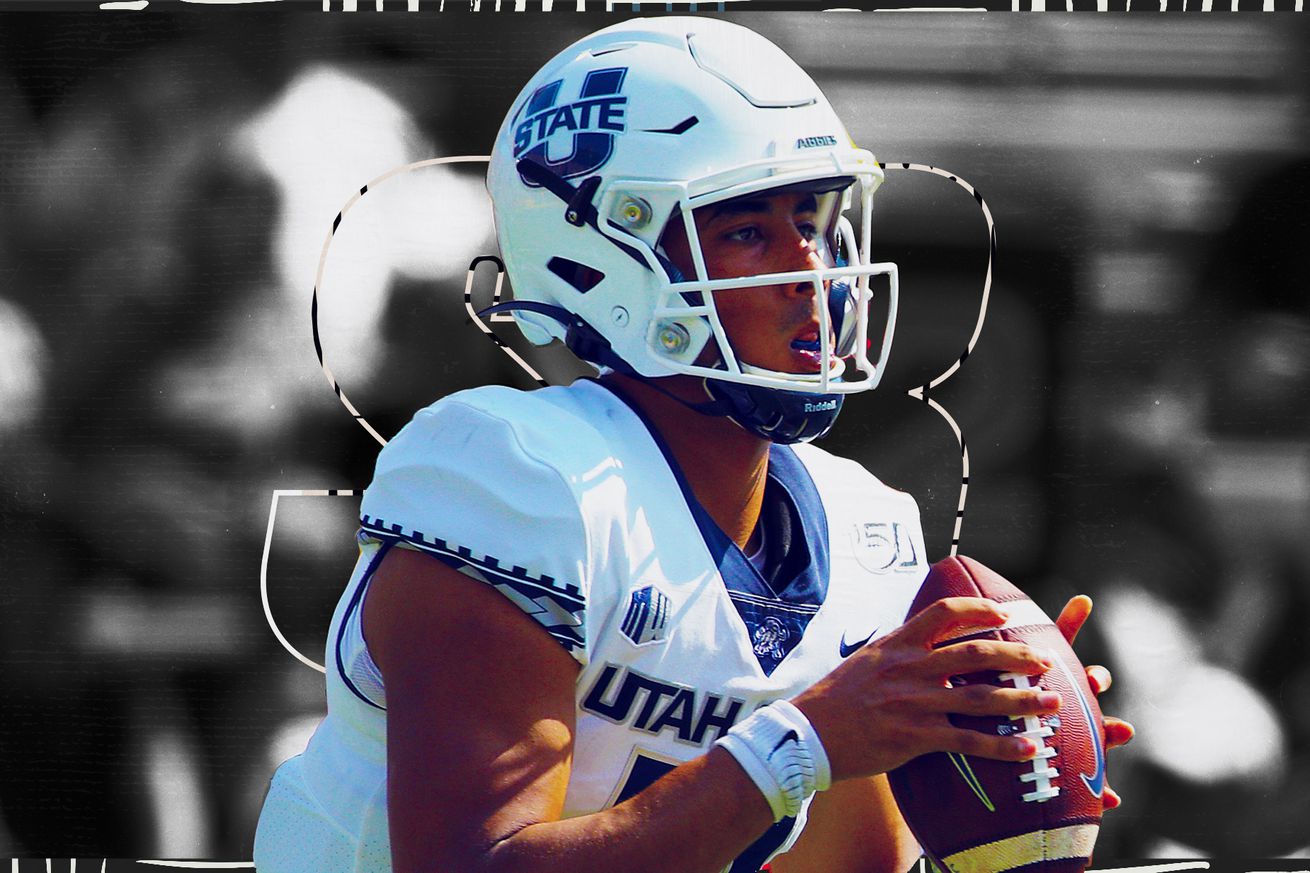 Jordan Love had a great 2018 and a disappointing 2019 at Utah State before entering the NFL Draft.

There isn’t a more divisive quarterback in the 2020 NFL Draft than Jordan Love of Utah State. Love is projected to be a first-round pick because of his physical traits and strong play in 2018 — and in spite of his rawness and disappointing 2019 season.

Love has arm talent that’s drawn comparisons to Patrick Mahomes. He can make any throw. He has the touch to hit any receiver in any situation, and can lead his covered receivers where they need to be to make big catches. He has thrown some absolutely beautiful passes with a fluid throwing motion.

But sometimes the brain gets in his way. Even when he can put the ball where it needs to be, his decision-making leaves a lot to be desired. He threw 17 interceptions in 2019 — including three in one game on three separate occasions — against 20 touchdown passes.

So is Love worth the risk for whichever team drafts him in the first round? Let’s start with some pros and cons before rendering a verdict.

Pro: The arm talent is extremely there

It’s not hyperbolic to say Love’s ability to sling the ball is reminiscent of Mahomes, even if the rest of his game isn’t at Mahomes’ level. There is an economy to his throwing mechanics — there is no wasted movement, no long windup, and no issue with fumbling.

Love has a killer sidearm throw, much like Mahomes, and it’s so effective because it isn’t that different than his normal throwing motion. Defensive linemen rarely get a hand on his passes because the delivery is so precise and quick.

And, like Mahomes, Love can sail one 50 yards deep if need be. He has plenty of arm strength and should be considered a prospect who can make throws from any part of the field and, crucially, from all angles.

Utah State loved to play a short-yardage offense, but as evidenced above, Love can air it out. And more important than that is how quick his release is and how effortless it looks when he launches the ball downfield.

NFL teams won’t have to change a thing about how Love handles the football on a mechanical level.

Con: He struggles to read coverages, and his decision-making suffers

It took a full season of work for defenses to get there, but Love’s struggles in 2019 paint the picture of someone who opposing teams have “figured out.” His rapid decline from one season to the next means he either regressed big time, or defenses started picking up on his biggest flaws.

And it probably wasn’t that hard to do.

The main issue with Love is he doesn’t read coverages well. Pre-snap adjustments haven’t been a big part of his arsenal, and on film, Love consistently fails to identify when coverage is being passed off from one defender to another. He didn’t follow the defensive steps in his head for a large portion of last season.

The play above is a prime example of what Love did A LOT in 2019. There were so many plays where the ball was snapped and he pretty much immediately threw it, regardless of coverage. A lot of his incomplete passes were on short balls that shouldn’t have been thrown.

Very simple coverages constantly beat Love in 2019. He can see and handle man coverage well, and even trusts his best receivers to make the tough catches, but he doesn’t read the zone well and doesn’t have a picture of the entire field in his head when he’s making throws. If a safety or linebacker is just outside of his cone of vision, that player might as well not exist.

Love possesses another infuriating quality among young quarterbacks: the tendency to lock on to his top read. At Utah State, Love was good at hitting his top receivers in man coverage, but there were many times where he threw passes that should never have been thrown.

Many of those passes should have been interceptions. And plenty of them were. Love will need a lot of coaching up to be able to handle NFL defenses, especially those that are more aggressive in the secondary.

Pro: Love has the size and athleticism needed for the NFL

Love comes in at 6’4 and 224 pounds, basically the perfect size for a modern NFL quarterback. He’s got big hands, and finished in the top seven at his position in the 40-yard dash, broad jump, vertical jump, and three-cone drill at the NFL Combine.

While not a designated runner often, Love did his share of scrambling in college. He picked up 403 yards and nine touchdowns on the ground in three seasons.

He’s quick and hard to tackle, and usually can recognize when he should take off.

He also showcases that athleticism in the passing game. He’s pretty good at getting out in space and making a throw downfield. He has a strong throwing motion even when he’s at a full gallop, and he makes defenders work to bring him down. When he throws on the run, he still puts his legs into it, and is among the more accurate on-the-run passers in recent years.

Love can outrun defensive linemen and if he can get a handle on the “read” aspect of the read option, then that could be a deadly weapon in his hands in the NFL.

Con: At times, he plays with panic

It’s easy to see how streaky Love was in college. He had moments where he could recover from a bad play, but by and large, when he began to struggle or got forced outside of his comfort zone, it got worse and worse.

Something about his internal clock gets thrown off. He stops recognizing blitzes, he stops moving out of the pocket, he shuts down as a passer. You can see Love throwing passes right into the chest of defenders almost immediately after the ball was snapped. He’ll throw into double coverage if he’s about to get sacked, instead of throwing the ball away. He also occasionally senses phantom pressure in addition to being bad at sensing regular pressure.

When things go south, Love tends to stiffen up, and he doesn’t rotate his hips all the way through his passes. There’s an urgency to his tempo that doesn’t do him any favors.

Fortunately, that’s something that he can work on in the NFL. Love misfired without pressure in his face often, and it wasn’t for lack of accuracy.

Pro: Love has the non-teachable parts down

This is the reason Love is such an intriguing prospect. His physical traits can’t be taught. He has all the arm strength he could ever need, the speed to make defenders miss, and absurd touch on the football.

Touch especially is hard to teach. Love can throw his receivers open with the best of them, provided he’s having a good day. He has great awareness of his own body and the angles he’s throwing from, an underrated quality among quarterbacks.

Quarterbacks can change their throwing motion, but it’s not easy and it’s much more preferable to land a quarterback who doesn’t need to relearn how to throw a pass in the NFL. The rest of his mechanics, from his footwork to his hips, are also very good and won’t require a ton of coaching.

That leaves his flaws. The tendency to get in a funk. The fact that NFL defenders will simply pick on him if he doesn’t get better at reading coverages. The lack of going through his progressions. All of those are teachable and areas he should improve upon at the next level.

Verdict: Love is absolutely worth the gamble, but he has a long way to go

If there was ever a potential franchise quarterback who HAS to have at least a year or two of sitting on the bench, it’s Love. There’s so much to like about his game and the way he approaches it, but he’s simply not ready right now.

No team should be targeting Love as a rookie starter. That isn’t to say he wouldn’t look good occasionally — there’s too much innate talent for him to fail outright. However, there would be more ugly moments, and it would be detrimental to his growth.

He’ll have to be coached up an awful lot, but his ceiling is extremely high. He just needs to land in the right place — a team that believes in its quarterback room and its own process to develop him into a star.