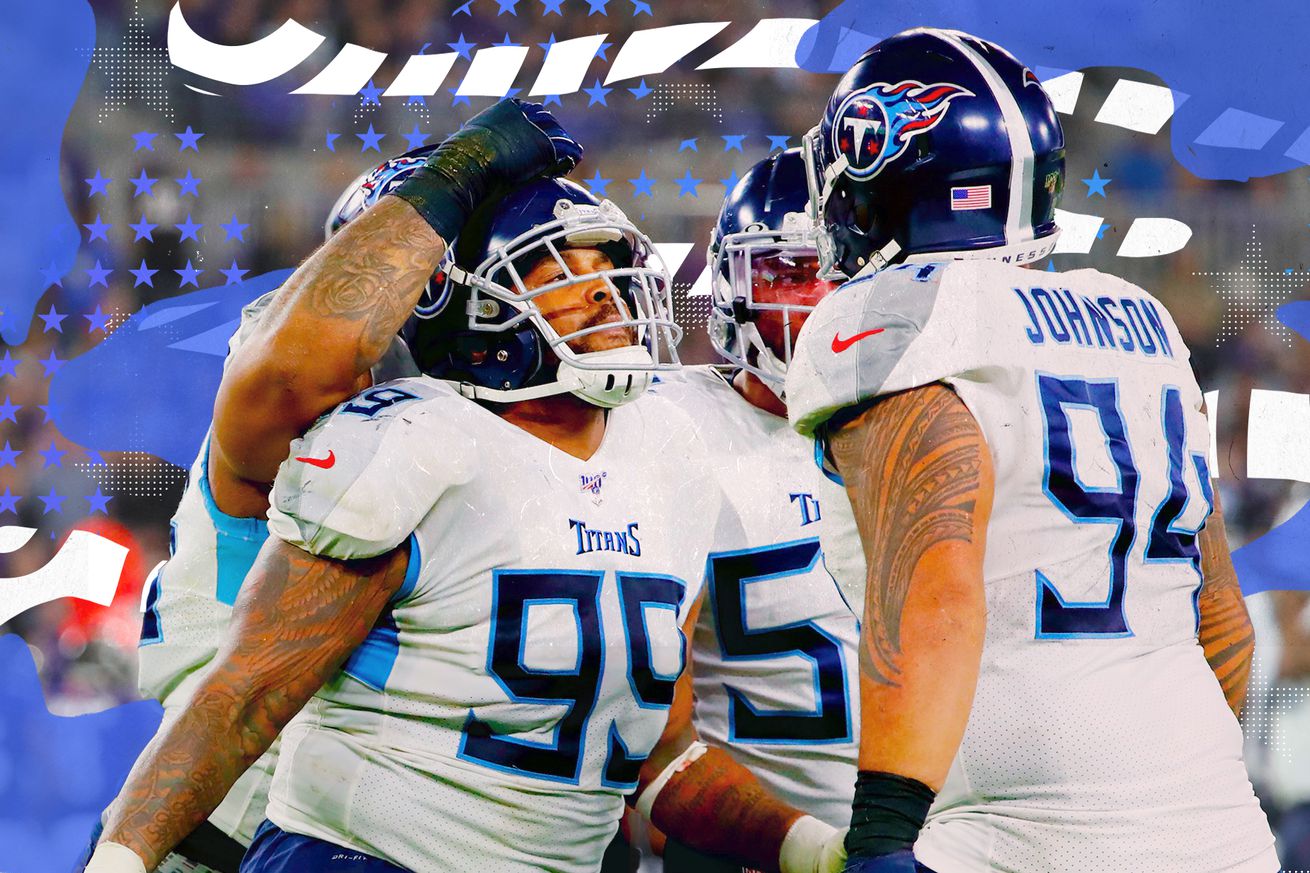 Titans veteran defensive tackle Jurrell Casey was a headache for both the Patriots and the Ravens.

Jurrell Casey is no Aaron Donald.

But there was a time when many NFL bloggers like myself thought Casey had a chance to put up big sack numbers on a consistent basis. Now that he has finished up his ninth season with the Tennessee Titans, I think it’s safe to say that isn’t going to happen.

At the same time, I’d still say the man is underrated!

OK, so he hasn’t touched double-digit sacks since 2013, but I will tell you this much: 51 career sacks for a guy who is primarily an interior pass rusher is pretty damn impressive. And let’s not act like he hasn’t notched a bunch of quarterback hurries and hits over the years. Both Casey and Donald play the position the “right” way, which is like manna for those of us who really appreciate defensive line play.

But after nine seasons, Casey’s best days are probably behind him. And that is somewhat reflected in how his stats fell off this year during the regular season as he posted a career low in tackles for a loss, his third-lowest number of quarterback hits for a season, and just five sacks.

While acknowledging he isn’t quite what he used to be, I wouldn’t be too quick to bury the OG if I were you, however.

He is a headache for most offensive lines on any given Sunday. For anybody who had forgotten who he was, Casey damn sure handed out a great reminder with his performance so far in the playoffs against the Patriots and Ravens.

And that should worry the Chiefs.

Divisional Round: 1 play Casey made halted any hope of a Ravens comeback

This postseason, 2013 Jurrell would’ve been jealous of some of the things 2020 Jurrell was able to do out there on the field. The older, wiser Casey isn’t going to fall for the okie doke these days. My guy is a wily vet now, which isn’t to say that he wins every battle up front, but it is to say that you will have a hard time beating him by catching him slipping. He is on his keys every play, and his technique is some of the most consistent you will find.

Mind you, while I normally think of Casey as a three-technique, the truth is the Titans have almost always kept him on the move.

Prime example is one of his sacks last weekend against the Ravens. A sack that, in my opinion, had a huge impact on the outcome of the game, considering it came in the third quarter when the Ravens still had a chance at a comeback.

And who did he have to beat to get it? Just Baltimore All-Pro left tackle Ronnie Stanley.

And how did Casey beat him?

He was already lined up in a wide five and used the momentum from getting chipped by the running back, who was on his way out on a route, to transition to an inside move. Then Casey turned his shoulders outside to “get skinny” through the gap, and swiped Stanley’s hands down as he slid by. It was a clean win that allowed Casey a free run at Lamar Jackson.

And then Lamar, of course, made him miss.

”Whiff” is the word that comes to mind.

But, as he always does, Casey just kept right on working and eventually caught back up to Jackson from behind. With the uber-elusive quarterback now dead in his sights, Casey opted not to go the safe route and just go for the sack, but also to chop down on Jackson’s arm to try force a fumble. Not only was he successful at separating the ball from Jackson’s grasp, one of his teammates was able to recover the fumble as well.

That’s what I call being impactful.

Oh, but he had two sacks didn’t he?

To reiterate my point about Casey’s position versatility, that second sack came from when he was lined up head up on the center initially. It doesn’t matter where they put him, he’s gonna cook.

Wild Card Round: 4 times Casey kept the Patriots from taking over

To make a separate point about Casey sometimes having a big impact on games that isn’t necessarily quantifiable on the stat sheet, let me give a brief rundown on a few important plays he made against the Patriots that you might’ve missed:

He beat right guard Shaq Mason like a drum on the second play from scrimmage with a club-to-forklift-to rip move and barely missed sacking Tom Brady.

That forced Brady into an incompletion that probably should’ve been flagged as intentional grounding.

His tremendous hustle right before halftime while being a part of a two-man rush helped to keep a third-down screen from gaining enough yardage for a first down.

Brady had to settle for a Hail Mary try on the next play which, of course, ultimately fell incomplete.

Remember that long pass to Ben Watson that called back with a little over nine minutes left in the third quarter because of a Patriots offensive lineman being illegally downfield? That was Mason again, and he was downfield because Casey was hustling and Mason, rightly, thought Casey had a chance of getting to Brady before he could get the throw off.

As a reminder the score was 14-13 Titans at that point.

He also shared a pressure with DaQuan Jones on a third-and-3 early in the fourth quarter where he started off lined up as the left three-technique in the B gap, stunted outside, and beat Patriots right tackle Marcus Cannon with a swiper hands move.

The Patriots were at the Titans’ 47-yard line and still ended up punting with the score remaining 14-13 Titans.

Just because you didn’t notice, didn’t mean Casey wasn’t putting in work. But don’t fret, that’s what you’ve got me for!

AFC Championship: Why Casey is a scary matchup for the Chiefs’ OL

I believe his best performance of these playoffs is still yet to come this week against the Chiefs.

For one, the Chiefs’ starting left guard for most of the season, Andrew Wylie, has been out of the lineup since Week 16 with an ankle injury. Stefen Wisniewski has taken over that position since then and he is a little on the lighter side at 305 pounds, which I think will be a disadvantage when facing Casey this week. I just don’t think he is going to be able to anchor down well when facing Casey’s power. There is a chance that Wylie will play, but there is no way of knowing how effective he might be either in his first game action since the injury.

I’m not sure if Chiefs right guard Laurent Duvernay-Tardif will fare much better against Casey, either. While Duvernay-Tardif is a little bigger at 321 pounds, I saw him get beat several times last week, including just before halftime when Texans rookie Charles Omenihu got him with the same type of swiper move that Casey utilizes to great effect. You can bet your ass Duvernay-Tardif will see that move from Casey, too.

Even though I still expect the Titans to move Casey around a bit this weekend, I also think he may line up at three-technique a little more than usual, especially on passing downs. So I might finally get to see him play a ton at the position that I think he was born to play for most of the game, and I couldn’t be more excited.

But, let me also say that I wouldn’t be surprised to see him beat Chiefs left tackle Eric Fisher out on the edge, either. At the very least, I’d be willing to bet when Casey faces Fisher one-on-one that he will be able to collapse the pocket back into Patrick Mahomes’ lap. And if he does, you can expect him to come off that power rush with the quickness and take Mahomes to the ground.

Along with beating both guards when he has one-on-one opportunities, I also believe Casey has a good chance to get pressure running interior pass rush games. He is excellent at running games, whether he is the penetrator, or the loop guy. I think the Chiefs’ interior three may be vulnerable specifically to TOM — one defensive tackle is the penetrator in the A gap either lined up there or with a stung inside, the other defensive tackle loops around behind them to the B gap — games up front this weekend as well, and those seem to be his specialty.

Having said all that, let me be clear and say that while I believe Casey is primed to have a hell of a game on Sunday, I still don’t think it will be enough to get the Titans a win.

The Chiefs can just score too fast and in too many ways, and Casey won’t be on the field all the time anyway. I just don’t see a way the Titans win a shootout, and if they fall a couple of touchdowns behind early on, that is just a recipe for disaster.

By the way, if you’re about to bring up their Week 10 victory, just don’t. Seriously.

If you are now over there silently pissed because I won’t let you point out that the Titans scored over 30 points to win that game, please go back and look at the context. Hell, really all you have to do is remember it was Mahomes’ first game back from injury, the Chiefs had a makeshift offensive line, they had some special teams blunders, and the Tennessee defense scored on a fumble return. Despite all that, KC was still in position to tie the game at the end and send it to overtime in Nashville.

See, I stopped you from looking stupid. You’re welcome!

Anyway, just because I don’t think the Titans will win doesn’t change my prediction about Casey having a big day.

At 6’1 and a listed weight of 305 pounds, Casey, like Donald, could fairly be described as “undersized.” Once the the ball is snapped, however, both guys play like they are 10 feet tall. I want to make clear that in addition to being one helluva pass rusher, Casey has also been a disruptive force against the run consistently over the course of his career.

The main reason why Casey continues to be such a force even after having lost a little of his fastball is because he does all the little things so well.

Jurrell Casey may not ultimately end up with some of the statistics that us bloggers thought he might reach, but more people should still know his name. Sunday is a perfect time for him to once again remind us all that greatness isn’t always measured by numbers. He might not be Aaron Donald, but Pat Mahomes is definitely going to feel him on Sunday.

I, for one, can’t wait until he proves me right.

Just like I have been the last two weekends.