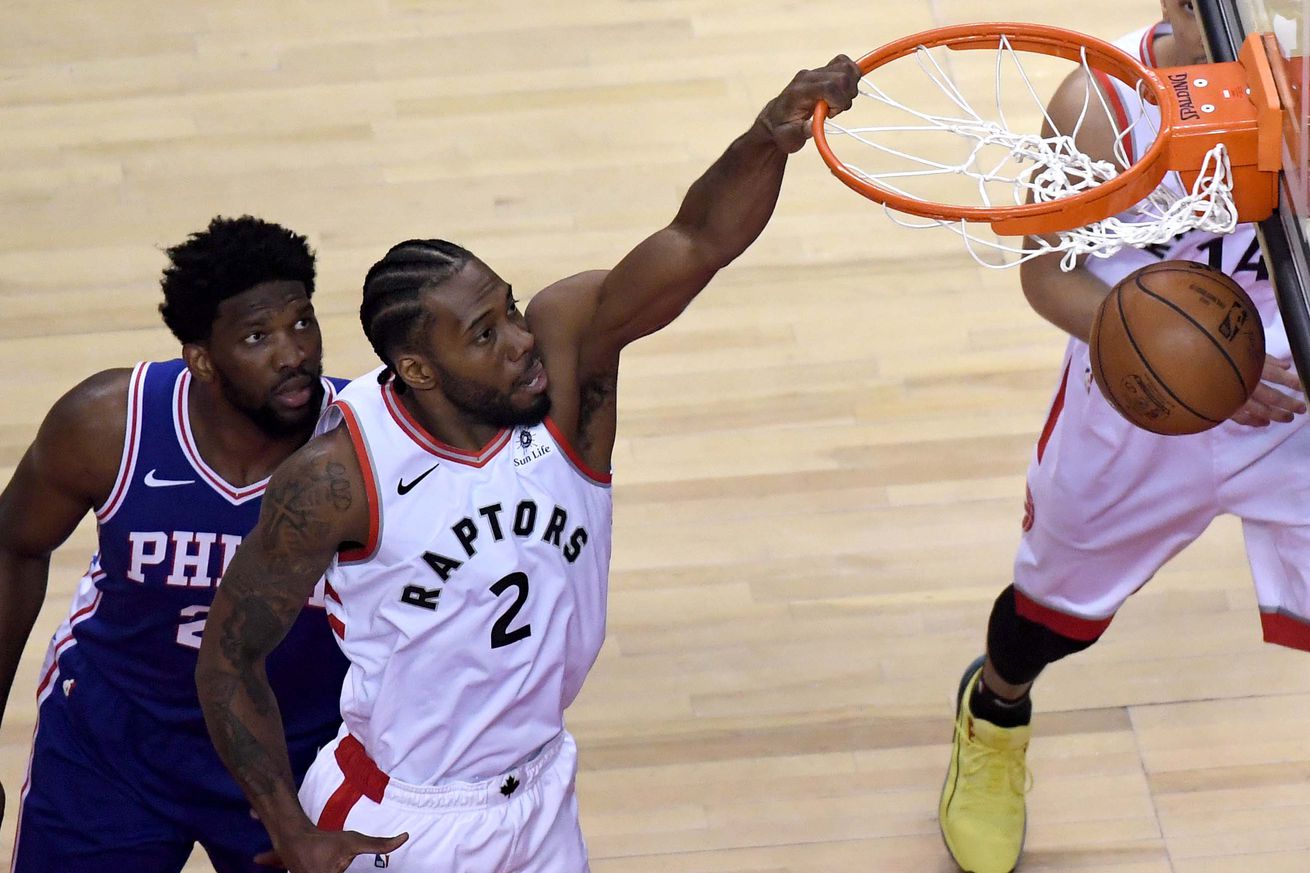 Leonard’s remarkable performance is a reminder exactly who we’re dealing with, and how much his addition changes the Raptors.

It’s a vivid picture: Leonard’s remarkable performance against the 76ers immediately followed by DeRozan’s lukewarm showing in a Game 7 Spurs loss. It’s a painting of what Toronto GM Masai Ujiri had in mind when he traded DeRozan, Jakob Poeltl, and a first-round pick for Leonard and Danny Green, despite both being impending free agents.

The Raptors went for gold, trading the face of the franchise to rent an all-world forward — one coming off an injury that limited him to just nine games last season, who also can (and very well may) leave in free agency in July. That gold was in the form of an NBA Finals trophy, and so far, the Raptors look every bit like a team that can win a championship.

Kawhi Leonard legitimized the Raptors this season. Yes, they lost Game 1 of the first round to Orlando, but they rebounded and won four in a row in blowout fashion. The way Toronto picked Philly apart in Game 1 of the second round — remember, Toronto never wins Game 1s — shows that the gamble Ujiri took over the summer might pay dividends, both this season and potentially down the road.

Leonard didn’t just score 45 points — something only Vince Carter has ever done in a Raptors playoff game — but he did it on 16-of-23 shooting from the field. Against a Philadelphia team boasting Joel Embiid, Ben Simmons, Jimmy Butler and Tobias Harris, Kawhi Leonard was far and away the best player on the court. He owned the game, and it wasn’t a matter of discussion.

Kawhi put up the best #NBAPlayoffs game of his career with 45 PTS , 11 REB and the win #WeTheNorth pic.twitter.com/wKQB9C3pT2

There was nothing the Sixers could do to slow him down. Butler, a premier two-way wing, had no answer. Simmons, who defended him in spots, said he thought he played good defense. Harris’ length offered no solutions, either. The only answer was Leonard, who pick and chose when he wanted to make a shot.

Game 1 against the Sixers was a reminder just how dominant Kawhi Leonard can be. This was the same player who bent the Golden State Warriors to his will in Game 1 of the 2017 West Finals, before his injury allowed the Warriors to come back and sweep the series immediately after. This is the player who won Finals MVP and made LeBron James quake in his shoes. Toronto is banking it can convince Leonard to stay long-term if its season is successful enough. He is the level of player who can decide the Raptors’ trajectory over the next few seasons with one simple decision: stay and win, or leave and win somewhere else.

It’s not all Leonard. Pascal Siakam has been incredible, and was again with 29 points on 12-of-15 shooting against Philadelphia. His emergence as the runaway Most Improved Player of the Year allows the Raptors to dominate on the defensive end. It allows Kyle Lowry to settle into his role as a facilitator, picking his spots as now the third-best player on a championship team — exactly where he should be. Leonard’s dominance, in a way, has allowed Siakam to flourish as well.

The Raptors are doing what they’re supposed to do: make it incredibly difficult for Leonard to reasonably leave this summer. He isn’t going to find a better supporting cast in free agency anywhere else in the NBA. Leaving Toronto would put his desire to win multiple championships against his purported desire to play at home in Los Angeles.

But Leonard, now, also looks like the best player in the Eastern Conference. On a floor with five stars, he was the standout among the standouts. He was the player for which teams have had no answer. He was everything Ujiri envisioned when he traded for him last summer.

That trade looks like one of the best moves the Raptors could have made. It was a risky gamble now paying off in money time for Toronto. Leonard and DeRozan, in a way are opposites: one raises his game in the playoffs, one has always shrinked from the moment, as he did again in his first Game 7 with his new team.

This is exactly Ujiri banked on when he pulled the trigger on this deal. Leonard looks like the best player in an Eastern Conference that racked up stars overnight. If he is indeed that and chooses to stay, Toronto may be on the verge of forming a dynasty.