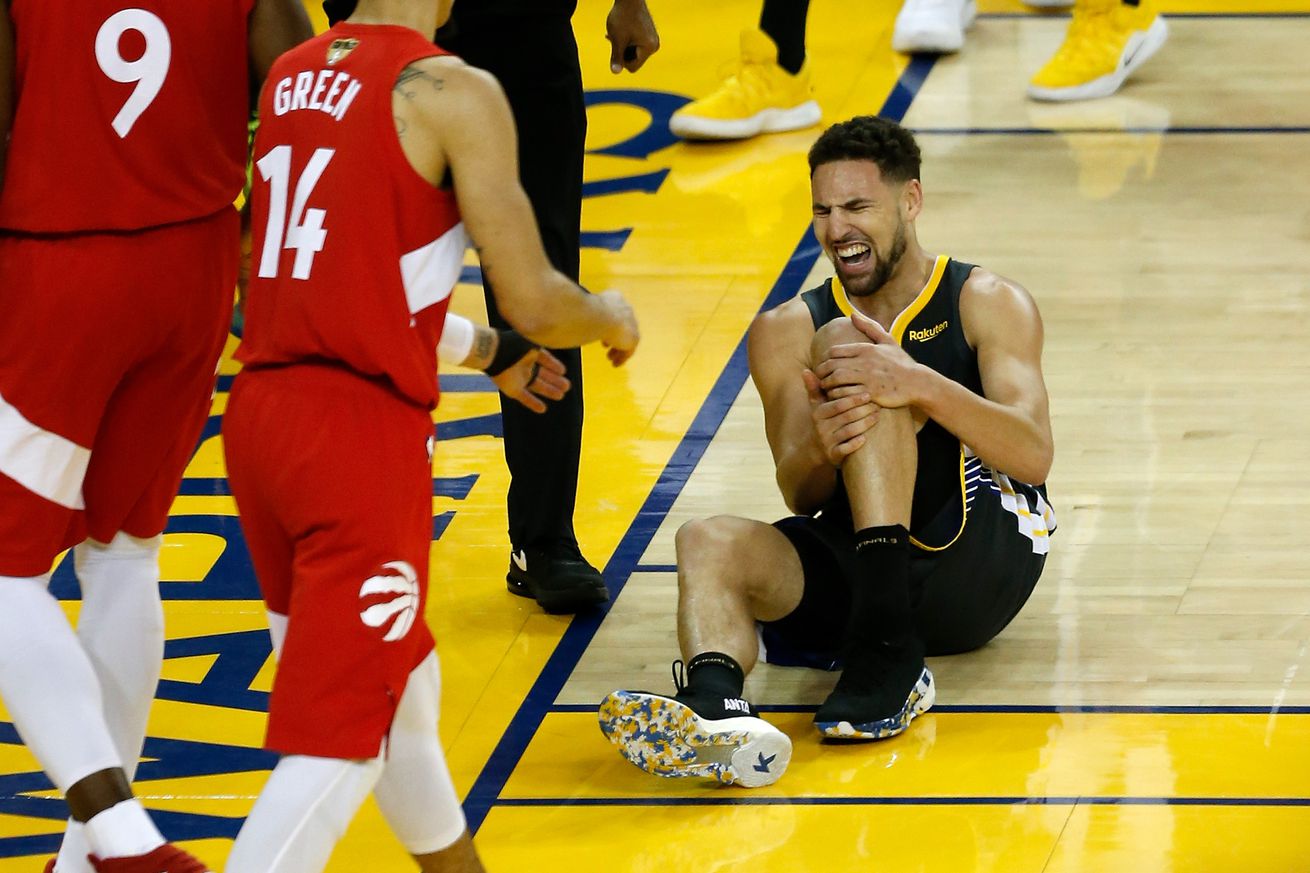 What an incredible moment in Game 6 of the Finals.

In the third quarter of Game 6 of the NBA Finals, Klay Thompson went up for a dunk, after he’d erupted for a barrage of threes to put the Warriors in the lead. Sadly, he landed awkwardly and bend his knee in such a way that left him on the floor, sitting there as all of Oracle Arena fell silent.

Klay goes down with an apparent leg injury, and all of Oracle holds its collective breath. pic.twitter.com/QGqNxvgYhY

It was nothing short of devastating watching the Warriors’ player of the game, who had 28 points at the time, go down, 48 hours after Kevin Durant tore his Achilles, 11 days after Kevon Looney fractured his collarbone, 26 days after Andre Iguodala injured his calf, and 59 days after DeMarcus Cousins tore his quad. Not again. Not Klay Thompson. Not in his famous Game 6 performance.

Steph Curry could only go to the opposite side of the court and sit with his thoughts.

Klay was helped off the court without putting weight on the knee, and headed back to the locker room for what most assumed would be the game, and probably series. Another Warriors player would be selected to take his free throws, officially meaning Thompson couldn’t return.

Then, miraculously, Klay emerged from the locker room on his own after a commercial break. He not only took, but made his ninth and 10th free throws of the night to stay perfect. He refused to be taken out for the game by NBA rule. It was a microcosm of this entire Warriors series — one the basketball gods have refused to let Golden State take easily.

Klay turning around in the tunnel and coming back out to shoot free throws had Oracle going nuts. pic.twitter.com/T111U9aH8e

Even after the free throws, Thompson tried his best to remain in the game. Warriors coaches were always going to sub him out, but he tried to blend in among the crowd of Golden State towers and get in a defensive stance. He was eventually subbed, and ESPN’s Doris Burke reported that the injury will keep him out of the game.

He was seen on crutches during the fourth quarter:

Klay Thompson is seen walking by the Warriors locker room on crutches. pic.twitter.com/U8IoHkvvJI

The Warriors — no matter how unwise, and unsafe — refuse to let everything go wrong. They’re here to spite luck right in its cruel face.