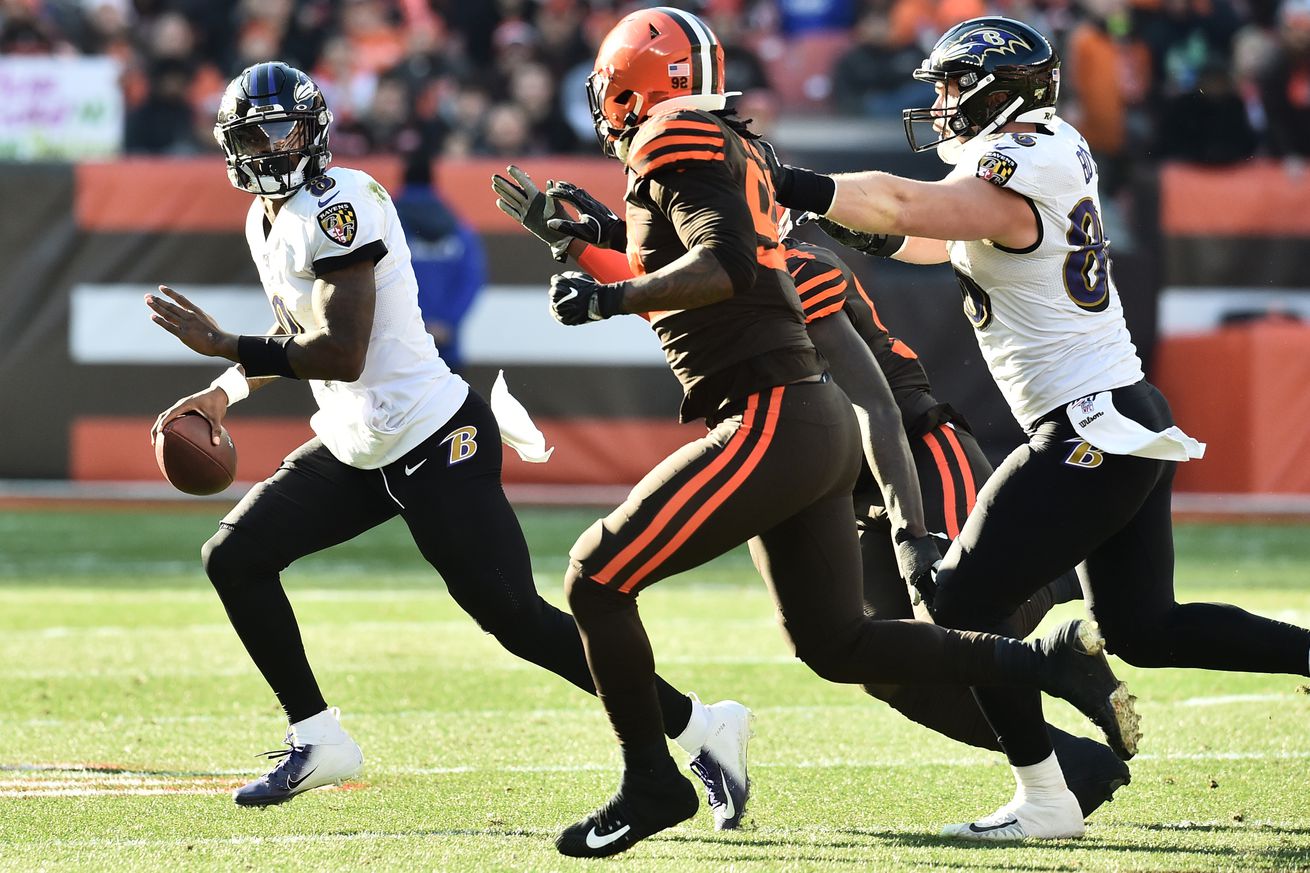 Cleveland gave Jackson all the leeway he needed to snuff out the Browns’ playoff chances.

For nearly six 2019 quarters against Baltimore, the Browns had contained Lamar Jackson. They’d held him to 25 rushing yards and a pair of interceptions in a 40-25 Week 4 win. In Week 16, they forced the Ravens into their first second-quarter deficit in months.

Cleveland, a 10-point home underdog, led 6-0 as halftime approached. Then, between the two-minute warning and halftime, that lead became a 14-6 deficit.

How’d that happen, besides the common thread that some extremely Browns things happened to, of all teams, the Browns? It’s all thanks to an MVP-confirming stretch from Jackson … and some awful decisions from the Cleveland coaching staff.

The Browns handed Jackson the chance to torch them

Cleveland faced third-and-1 at its own 28-yard line with 2:08 left in the first half and a six-point lead. A first down would give Baker Mayfield’s offense the chance to run down that clock and hit the locker room with a two-possession lead.

Instead, Kareem Hunt lost eight yards on an aborted halfback pass — notable since he’d averaged 4.4 yards per carry since arriving in Cleveland. His team handed the ball back to the NFL’s most dangerous player.

This didn’t necessarily spell doom for the Browns. They’d bottled Jackson up months ago and had done the same early at home. Baltimore’s first four drives sprang for 120 yards but failed to find the end zone. Each of the team’s previous two possessions had ended in punts.

Steve Wilks’ defense had limited the dynamic QB’s rushing through limited blitzes and keeping his linebacking corps glued to its lanes. While the oft-untouchable Jackson had 33 rushing yards in those opening drives, he’d only converted a single third down. The Browns’ secondary zoned in on his tight end help and left the Ravens’ underutilized wideouts in man-to-man coverage, effectively taking away the most vital piece of Jackson’s passing game.

It worked! Until, as so many teams have found with Jackson, it didn’t anymore.

Cleveland’s punt at the two-minute warning gave the soon-to-be MVP another offensive opportunity. First came a perfectly thrown strike to Mark Ingram deep down the middle of the field that set Baltimore up in field goal range. Then the Browns made one mistake no team can afford when facing Jackson.

Andrews is a massive part of the Baltimore offense. No player on the roster has more targets, receiving yards, or receiving touchdowns. If Jackson is looking downfield, there’s statistically a 24 percent chance the big tight end is going to be his guy.

That means Andrews is typically the first true read Jackson is making when he looks downfield. If he’s wide open — if, say, a secondary has completely forgotten he exists — it’s almost always going to end in a massive gain.

Just like that: Ravens 7, Browns 6. This incredibly easy touchdown was only the beginning of Cleveland’s two-minute humiliation.

The Browns, facing a Baltimore team with no timeouts and 1:18 on the clock, threw three straight interceptions on their ensuing drive before giving the ball back to Jackson. And though his first touchdown pass was a function of a leaky defense, his second would be another pummeling strike in his pending TKO over the rest of the NFL MVP field.

Once again, Andrews — covered this time, though it made no different — hauled in a pass from a quarterback capable of bending the laws of physics. That capped a 75-yard touchdown drive that only took 46 seconds of game clock. Jackson’s passing was responsible for all 75 yards.

The final tally after the two-minute warning?

And that was effectively it for the Browns.

The keystone of the Browns’ defense had been loosed. That crumbling arch gave way to the absurd plays Jackson has made look mundane. Juking a linebacker so hard it makes him look like he’s running in bullet time? Done.

Botching a shotgun snap and then riding that mistake for a 12-yard gain? No problem. Third downs? He converted his next four over the course of two scoring drives that gave Baltimore a 21-9 lead.

When a fourth-quarter Odell Beckham Jr. touchdown cut the score to 24-15, Jackson and tailbacks Gus Edwards and Justice Hill — playing in place of an injured Ingram — bled the clock down against a gassed defense. That Browns unit was doing many of the same things it had done early in the first half, but Jackson had found a weakness and was now exploiting it.

good luck stopping the Ravens from running out the clock with a lead this postseason pic.twitter.com/TjmNH2720v

Baltimore ran the ball on all eight plays of the aforementioned drive. The Ravens gained 84 yards, burned off 4:22 of vital game time, and shut the door on the Browns with Hill’s 18-yard touchdown run.

Jackson, limited to being merely “good” over his first four drives, finished his day with 341 total yards — 238 through the air and 103 on the ground — and three passing touchdowns. The Ravens averaged 6.8 yards per play and gained 450+ yards for the sixth time in 2019. They won their 11th straight game in the process and clinched homefield advantage through the AFC side of the playoffs.

In the process, Jackson — likely staring down two weeks off thanks to a meaningless Week 17 game (though John Harbaugh hasn’t made a decision about resting his starters) and a first-round bye — became the first player in league history to pass for 3,000 yards while rushing for 1,000.

So how can any team stop the Ravens this postseason? If the Browns are any indication, the familiarity of a rematch won’t help. Covering Andrews will, but that’s a tall task. Containing Jackson is a taller one — and even if you stun him for 28 minutes of the first half, he can still slice you open in the final two.

There’s no playbook for handling Jackson. He’s a video game character come to life. His next task will be to carry this greatness into the playoffs. If he can, he might be the author behind one of the greatest seasons in NFL history.