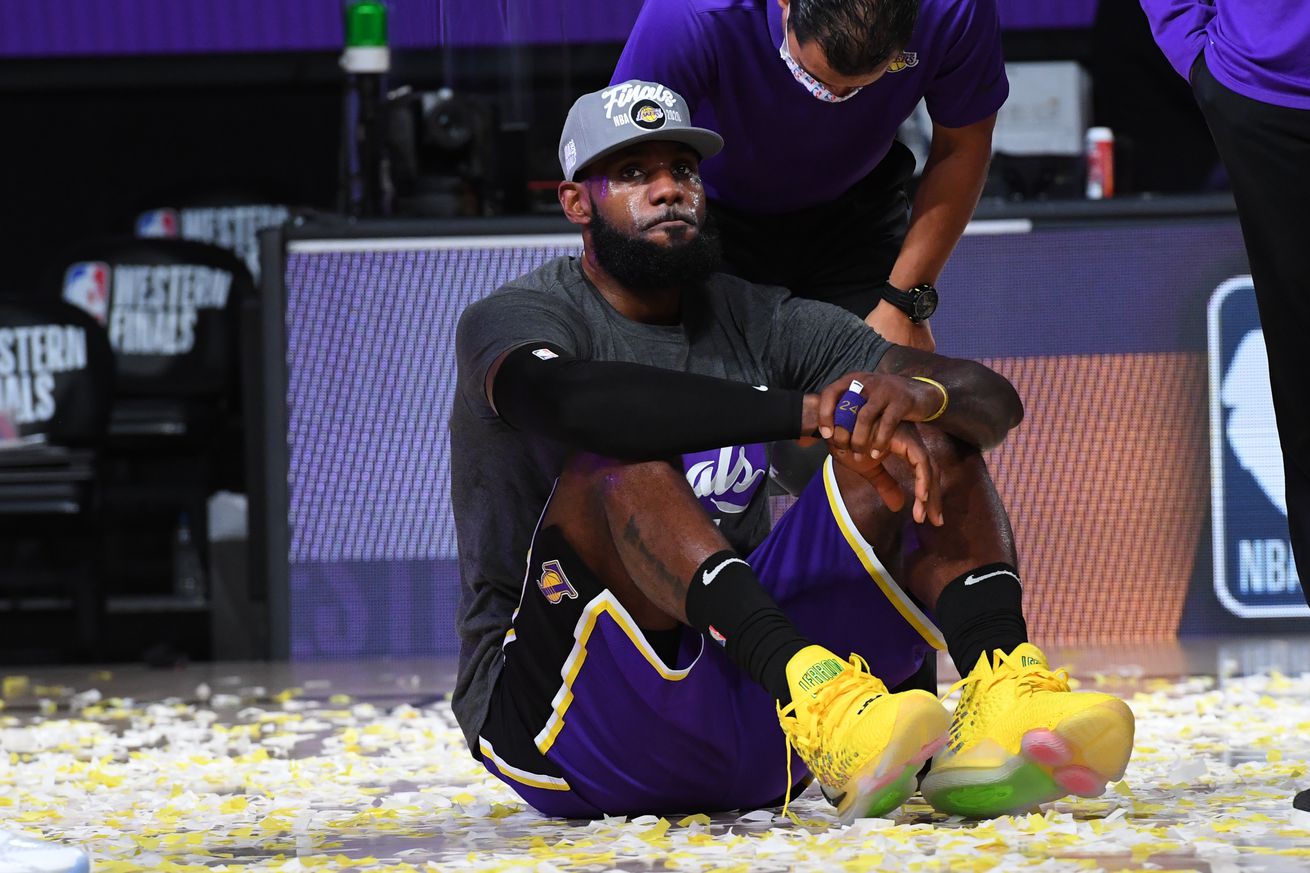 The Lakers won the fewest games in the NBA in the previous five seasons before they signed LeBron James.

The Denver Nuggets were trying to make a comeback to save their season in Game 5 of the Western Conference Finals when LeBron James decided to slam the door shut. With the Lakers leading by seven points with just under four minutes left, James ripped four straight deep jumpers to ice the game. LeBron and the Lakers had done what Kawhi Leonard and the Clippers could not: deny the Nuggets an opportunity to rally back from another 3-1 deficit by forcefully closing out the series.

Now the Lakers are in the Finals for the first time in 10 years, where they’ll be the favorite regardless of who they face from the Eastern Conference.

It’s hard to be shocked by LeBron reaching the Finals at this point. James has made the Finals nine of the last 10 seasons, with last year’s injury-plagued debut in Los Angeles as the lone exception. Add in the Cleveland Cavaliers’ Finals run in 2007 that James powered as a 22-year-old, and that’s now 10 Finals trips in 17 years for his career. Only Bill Russell and Sam Jones have made more Finals appearances than LeBron.

LeBron in the NBA Finals feels inevitable at this point, but his return to basketball’s biggest stage with the Lakers is actually anything but. It might be hard to remember now, but the Lakers were a disaster before they signed him. On the day LeBron announced he was leaving Cleveland for Los Angeles, it was hard to see how he’d be able to get this franchise back in the Finals in just two years.

Everything seems so obvious with the benefit of hindsight. LeBron is arguably the greatest basketball player ever. The Lakers are arguably the most prestigious franchise in the NBA history. Why would LeBron and the Lakers teaming up for a Finals run together feel so surprising?

To fully appreciate what LeBron has done in Los Angeles, you need to take a step back and realize where the Lakers were coming from. This Finals run was hardly preordained when LeBron joined the organization in the summer of 2018.

In the five seasons before LeBron came to Los Angeles as a free agent, the Lakers won the fewest games in the NBA. From the 2013-2014 season to the 2017-2018 season, the Lakers won only 126 games. Even the Hinkie-era 76ers had one more victory!

It wasn’t all that long ago when this was the Lakers’ starting lineup.

This was just 5 years ago … pic.twitter.com/l2RLY1hFtU

The last time the Lakers thought they had a legitimate title shot was back in 2012-2013. The Lakers had traded for both Dwight Howard and Steve Nash to complement Kobe Bryant and Pau Gasol on a team that was considered a favorite for the championship. You probably remember how that season ended: the Lakers fired head coach Mike Brown after just five games, Howard and Nash were decimated by injuries, and Kobe tore his Achilles late in the season. From that point on until they signed LeBron, the Lakers were awful.

It’s easy to forget this dark age of Lakers basketball right now, but these are things that actually happened:

It is pretty wild that LeBron chose this situation for the golden years of his career. Yes, the Lakers had some good young players on the roster with Ball and Ingram, a pair of former No. 2 overall draft picks. Yes, they were armed again with another top-five draft pick. Yes, they’re the Lakers.

The situation wasn’t hopeless, but it was also very far from a sure thing. It only feels like one in hindsight because the Lakers added perhaps the best player the league has ever seen.

Considering the context, this is one of LeBron’s most impressive seasons ever

LeBron James didn’t just join the team with the worst record in the NBA over the last five seasons when he picked the Lakers. He also chose to leave the much easier Eastern Conference for the treacherous West. He decided to shoulder this burden after he had already finished 15 NBA seasons, played 239 playoff games, and played in the Olympics three times.

Even after the Lakers added Anthony Davis over the offseason, there were still plenty of people doubting the Lakers. I was one of them. The supporting cast around James and Davis just didn’t’ seem talented enough. The West was going to be loaded once again. The Clippers in particular felt like a more complete team.

Yet here are the Lakers, back in the Finals again. LeBron James, in the 17th season of his NBA career, just turned around what was the worst team in the league over the last five years to reach the Finals, and he did it in the more difficult conference, during a season with the unprecedented circumstances presented by a global pandemic and the need for a Disney-based bubble.

It all feels so obvious now that LeBron would get the Lakers back to the Finals. Just don’t take his road here for granted.