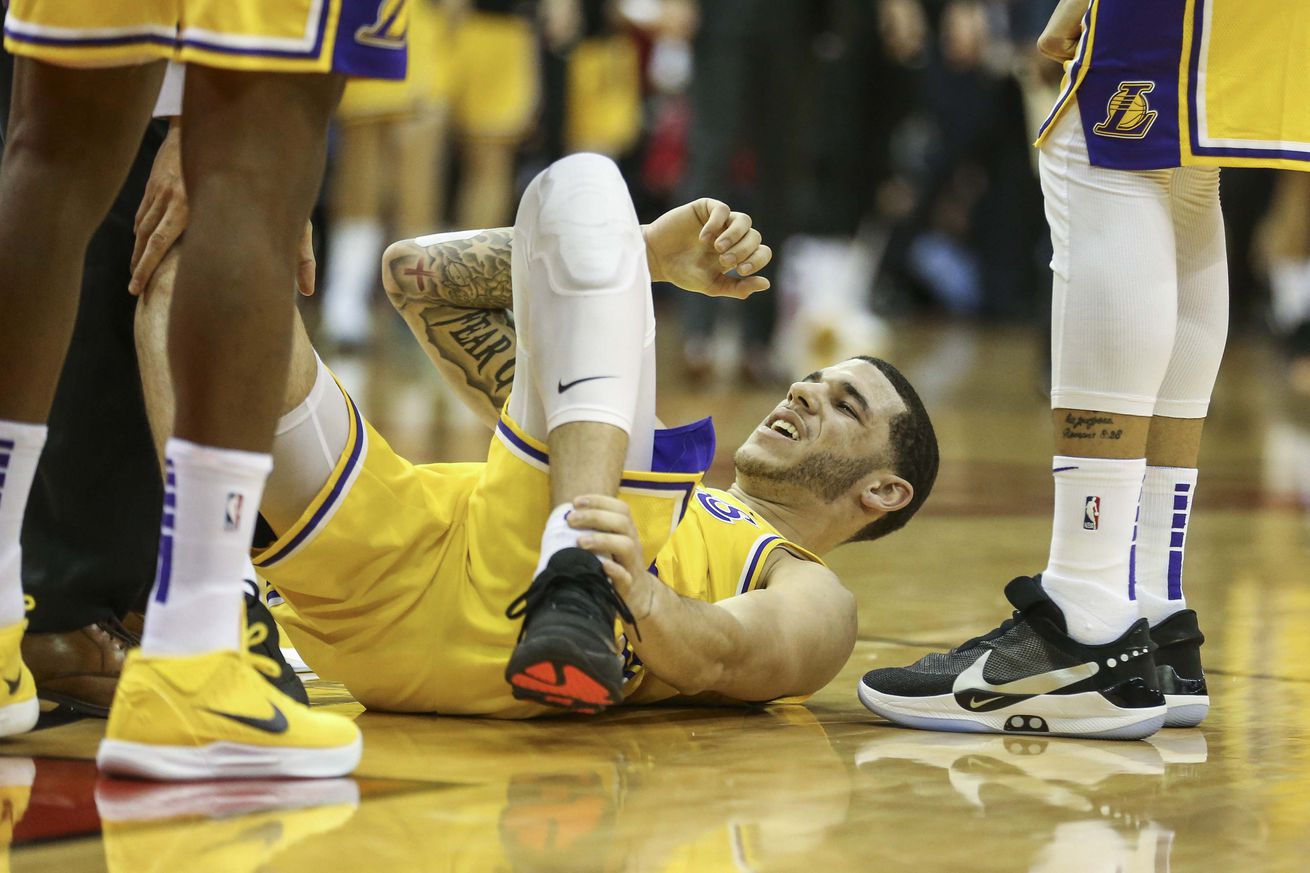 The injuries are piling up in Los Angeles, and this one couldn’t have come at a worse time.

Lonzo Ball was rolling. He had eight points, 11 assists, a steal, and a block to just one turnover as the Lakers build a 20-point lead over the Rockets, one of the hottest teams in the NBA.

And then Ball rolled his ankle in the third quarter, as severely as one can. Teammates carried him off the court, and the Lakers later deemed it a Grade 3 ankle sprain with an injury timetable for return of four-to-six weeks. Los Angeles is on the outside of a playoff race they were already looking into without LeBron James and Rajon Rondo. Ball’s injury makes it even more difficult for this team to stay afloat, especially as wild as the Western Conference playoff race is this season.

Lonzo Ball had to be carried off the court after this ankle injury.

That 20-point lead was already down to 17 when Ball left the game with an injury. Then James Harden went on a trademark hot streak, Houston forced overtime when Eric Gordon hit a double-pump three-point shot, and the Lakers eventually lost.

Brandon Ingram said on @SpectrumSN that the game got away from the Lakers “right when Lonzo went down. I think that’s exactly when it went away.”

Los Angeles lost, even though they outscored Houston by 15 points in the 22 minutes Ball was on the floor. The Rockets may have rallied anyway, but it was clear Lakers are a different team with Ball on the floor than they are without him.

Los Angeles will miss him for quite a few reasons. Here are two that stick out most.

Ball was turning a corner

Though LeBron James’ quadriceps injury hurt the Lakers in the standings, it did give several of the team’s young players a chance to improve. When you take the best player in the world off your team, the rest of the guys have to figure out how to pick up the slack.

For Ball, that meant increasing his season averages to 12.5 points, 7.2 assists, 5.9 rebounds and 1.4 steals on 37 percent shooting from three-point range over the 13 games James missed. As Silver Screen & Roll’s Harrison Faigen points out, the Lakers were 1.1 points per 100 possessions better with Ball on the floor during that stretch, despite the team going X-X in that time.

Ball had been even more aggressive in Los Angeles’ last three games. He was averaging 15 points and nine assists while doubling as the Lakers’ most aggressive perimeter defender, growing into his game before his teammates eyes.

“I think in these last three or four games, he’s been very consistent in what he does,” Ingram said, according to The Athletic. “And he continues to bring … the energy. Starts picking up 94-feet, him pushing the pace in transition, and it goes from there.”

“For Lonzo it’s learning on the go,” Walton said. “He hasn’t had an offseason yet to work on his game. So he’s learning while we’re playing during the season and he’s really done a nice job of turning a corner. We’ll see where we’re at, how long he’s out for, and hopefully get him up and running again and playing at the level he was playing at before he got hurt.”

Ball was the only healthy point guard on the Lakers’ roster

Los Angeles has several playmakers, including Ingram and Lance Stephenson. But with Rajon Rondo also out with a sprained right finger, Ball was the Lakers’ only remaining true floor general.

Walton told Spectrum SportsNet the team won’t rush Rondo or James back to action in wake of Ball’s injury, which makes sense: rushing someone else back from injury only increases the odds another will occur. But the Lakers will now have to play point guard by committee.

That means Stephenson may find himself as the starting point guard, or maybe that responsibility falls to Josh Hart. In the end, the ball will likely be in Ingram’s hands more often as a point forward, but Los Angeles will find it tough to make plays now with their best playmaker — behind James, of course — out for more than a month.

The timing of this injury couldn’t be worse

As of the time of Ball’s injury, Los Angeles is the ninth seed in the Western Conference. While they were just 2.5 games behind the fifth-place Rockets — who have their own injury woes to tend to — they were also just four games ahead of the 13th seed.

There’s no telling how long James and Rondo will take to return. A string of losses at the wrong time knocks the Lakers right out of the playoff picture. No team in the West can afford to lose too many games, and the Lakers aren’t exempt.

The next few games will be a test to see if this young Los Angeles team rally without its best players, and whether Walton can successfully coach his team through the roughest stretch of the season.

If they can’t, we might need to imagine another postseason without the league’s marquee franchise.