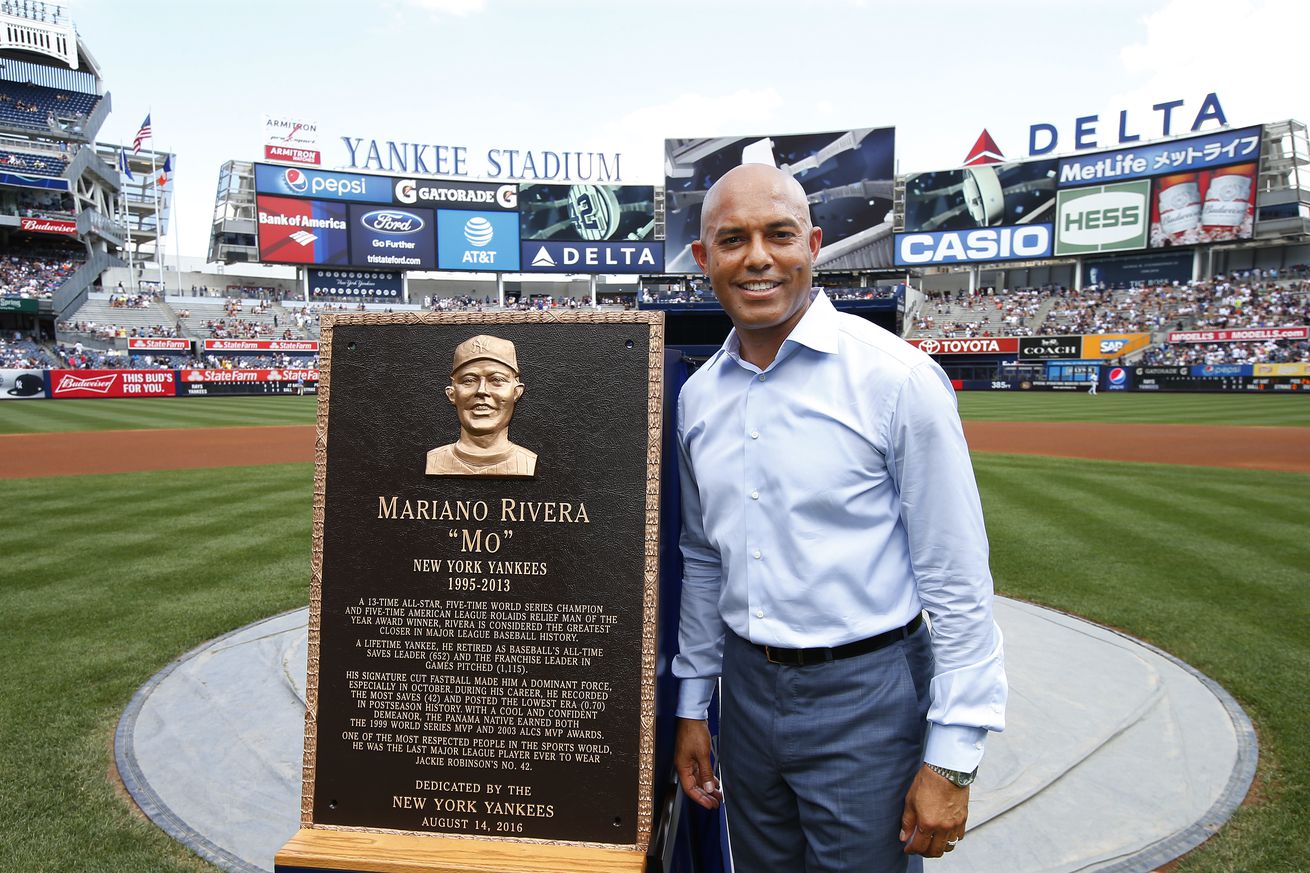 Yankees closer headed to Cooperstown with 100% of BBWAA vote, one of four players elected

The only thing more automatic than Mariano Rivera getting elected to the National Baseball Hall of Fame on the first ballot was Rivera on the mound with a lead in the ninth inning. On Tuesday the longtime New York Yankees closer got the call to Cooperstown with record-setting support from the Baseball Writers Association of America.

A total of four players were elected to the Hall of Fame by the BBWAA, with the late Roy Halladay, designated hitter Edgar Martinez and pitcher Mike Mussina also surpassing the necessary 75% to receive induction to Cooperstown.

Rivera getting in has long been seen as a forgone conclusion, after a 19-year career with the Yankees that saw him dominate opposing hitters with a single pitch, but a devastating one at that. Rivera and his cutter posted a minuscule 2.21 ERA and a record 652 saves.

After a rookie season that saw the Panamanian right-hander split time between starting and relief, Rivera found his permanent home in the bullpen in 1996, serving as a fireman reliever for the first of five World Series championships with the Yankees. A model of consistency, Rivera in his final 18 seasons posted an ERA of 2.16 or lower 14 times.

In the postseason is where Rivera was at his most ruthlessly efficient, with a record 42 saves and a mind-boggling 0.70 ERA — yes, starting with a zero — in 141 innings.

Rivera is the second player born in Panama to be inducted into the Hall of Fame, joining Rod Carew.

Roy Halladay received 85.4% of the vote from the BBWAA, elected like Rivera to the Hall of Fame on the first ballot.

One of the best and most durable starting pitchers of this century, Halladay led his league in innings pitched four times and complete games seven times, while posting a 3.38 ERA in his 16 seasons, a 131 ERA+.

The right-hander won two Cy Young Awards — one in each league, in 2003 with the Toronto Blue Jays and in 2010 with the Philadelphia Phillies — placed second two more times and had three other top-five finishes.

Halladay pitched a perfect game in 2010, striking out 11 against Miami, then raised the bar that October, authoring a no-hitter in the National League Division Series against the Reds, just the second no-hitter in postseason history.

Sadly, Halladay passed away in 2017 after crashing his airplane in Florida.

“Being inducted into the Baseball Hall of Fame is every boy’s dream. To stand on that stage in Cooperstown and deliver your acceptance speech in front of baseball’s most enthusiastic fans is something that every baseball player aspires to achieve, and Roy was no exception,” said Brandy Halladay, Roy’s wife. “But that was not Roy’s goal. It was not his goal to have those three letters after his signature. His goal was to be successful every single day of his 16-year career. Tonight’s announcement is the end result of that effort.

“If only Roy were here to personally express his gratitude for this honor, what an even more amazing day this would be. I would like to extend special thanks to the baseball writers for the overwhelming percentage of votes that Roy received in his first year on the ballot. It means so much to me, Braden and Ryan.”

Seattle Mariners designated hitter got 85.4% of the vote this time around.

His credentials as a hitter are impeccable, hitting .312/.418/.515, a 147 OPS+ in 18 years with Seattle, with 514 doubles and 309 home runs. Martinez led the American League in on-base percentage three times and won two batting titles.

The Major League Baseball yearly award for the best DH in the game is named after Martinez.

This is the fifth time in six years the baseball writers have elected at least three to Cooperstown. In the previous 55 years, the BBWAA elected three players into the Hall of Fame in a single year only four times (1972, 1984, 1991, 1999).

In addition to BBWAA selections Rivera, Halladay, Martinez, and Mussina, the veterans committee selections of Lee Smith and Harold Baines will be inducted into the Hall of Fame in a ceremony on July 21.