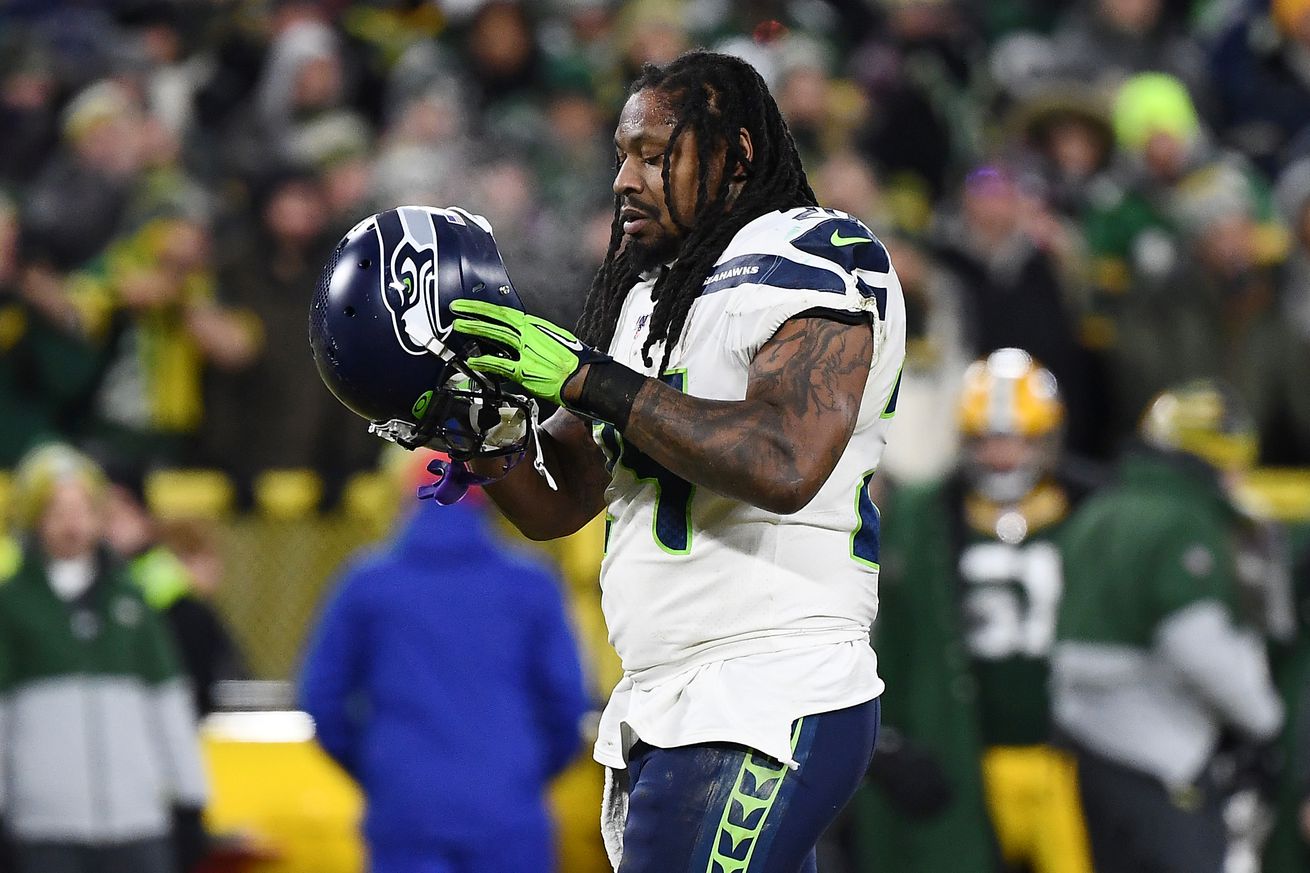 Marshawn Lynch gave the Seahawks a spark on the field, and some wise departing words for the younger generation of players.

When the Seahawks needed him most, Marshawn Lynch was more than happy to come out of retirement. The 33-year-old running back rejoined the team after it lost starter Chris Carson and backup C.J. Prosise to season-ending injuries in the same game, severely crippling one of the league’s top rushing attacks.

His return in Week 17 against the 49ers was a big morale boost for Seattle, even if he wasn’t an open-field monster like he was in previous years. The Seahawks used him sparingly at first, primarily in short-yardage situations, and found some success there. Mostly, though, Lynch was a veteran presence who was easy to rally behind, even if the Seahawks would ultimately come up short against Aaron Rodgers and the Packers in the Divisional Round.

Lynch didn’t confirm he’s staying retired, but if he does, he’d hardly be departing in a foul mood. The Seahawks gave it their all against Green Bay, and were all happy to have Lynch for a three-game stretch, including two playoff games.

Let’s take a look at what Lynch did on the field, what his teammates said about him, and the departing wisdom he left behind.

Lynch was a trusty goal-line back in his return

Before his return, the last time Lynch played in an NFL game was on Oct. 14, 2018 (against the Seahawks!), when he was on the Raiders. Few expected him to come back from that layoff and immediately rush for 100 yards in a game. In fact, he didn’t eclipse 100 total yards in the three games he played, but he did still manage to score four touchdowns.

The first came against the 49ers, Lynch’s first touchdown since September 2018. And it was a beauty:

If Lynch was absent some of the quickness that made his running extra lethal, he still had an abundance of that “throw your whole damn body at a pile and see what happens” style. As usual when near the goal line, Lynch got in, over one of the best defensive fronts in the NFL.

That touchdown sparked a comeback that faltered only in the final seconds on the back of a strong defensive stop from San Francisco.

Lynch also gave the Seahawks a go-ahead touchdown in the Wild Card Round against the Eagles:

The play above is vintage Lynch. He made a cut inside, which caused the first defender to tackle him low, a fool’s errand. The second defender collided with him full force and actually pushed him back, but Lynch spun around the whole thing and tumbled into the end zone.

He had a pair of touchdowns, both in the second half, in the 28-23 loss to the Packers.

The first was old-school power running — initiating contact at the goal line. He still hit the first player with the same power he showed in his heyday. A couple Packers defenders weren’t enough to stop him there.

Just like they weren’t enough to stop him the second time ‘round, either.

While not quite as impressive as his other three touchdowns, this one was important in getting the Seahawks back in the game. Lynch still made his way through two or three Packers players on his way to the end zone, making it a one-score game in the process. What’s most notable about the two touchdowns against the Packers is that Lynch was running out of the shotgun, but didn’t look slowed by it.

With these scores, Lynch increased his rushing touchdown total in the playoffs to 12, putting him in a tie for fourth place on the all-time list alongside John Riggins and Terrell Davis.

Lynch left his teammates with some wisdom

On the field as well as off, Seahawks players were very happy to have Lynch back in the building.

After the game, quarterback Russell Wilson and head coach Pete Carroll were effusive in praise for Lynch and how he helped those around him. Wilson in particular highlighted Lynch’s willingness to help rookie Travis Homer, the only other healthy running back on the roster. They weren’t the only ones to speak highly of Lynch.

“He’s just the ultimate teammate,” linebacker K.J. Wright said of Lynch shortly after his return. “Cool dude. Just ballin’. So, I’m glad to have him back.”

That speaks to the larger-than-football person that Lynch is. Everybody in the locker room respected the player Lynch was in his first run with the Seahawks, during which he ran for 1,000-plus yards four times, compiling 57 rushing touchdowns and helping them to victory in Super Bowl XLVIII.

His return wasn’t simply an attempt to earn a Super Bowl ring or get a paycheck. Lynch came back because of the bond he has with his teammates and the Seahawks organization. Having been retired (twice) for a time, he’s had some time to experience life on the other side of football and with that came some important wisdom: protect your future.

A lot of professional athletes struggle with money problems after their playing careers end. A decade ago, Sports Illustrated reported that around 78 percent of NFL players ended up with financial troubles after leaving the league — that number may not be accurate as of today, but it still looms large.

Lynch’s full quote about his parting message to his teammates is below.

Marshawn Lynch goes on at length about his advice for young players.

The gist: “Take care of your chicken.”

When Lynch was contemplating retirement in February 2016, Ian Rapoport of the NFL Network reported that Lynch hadn’t spent a dime of his actual playing money and was living off of endorsements. It’s safe to say that he takes financial issues seriously, and given the respect that locker room has for him, his wise words likely found its mark.

Together through it all. pic.twitter.com/0xE6ujpYRm

And it’s not just a message that’s important for the young guys to hear, either. Veteran linebacker Bobby Wagner was grateful to hear what he had to say and spoke on Lynch’s growing perspective as someone who has lived the post-NFL life.

“It was amazing to have him back,” Wagner said after the team’s loss to the Packers. “He came back and you could just tell he’s experienced a lot since he left. He’s traveled a lot and obviously playing for different organizations and things. And he came back and his willingness to want to share that information with young guys and myself, it was something that everyone in that room is forever going to remember because he shared a lot of things people can take and use, not just football, but in life.

“We really grateful for him coming back and giving us everything he had. It was fun to watch him again, watch him run people over and extend to the goal line. It was special,” Wagner said.

Though Seattle didn’t accomplish its goal of winning a championship, it was indeed fun to have Beast Mode back in action again, if only for three games.