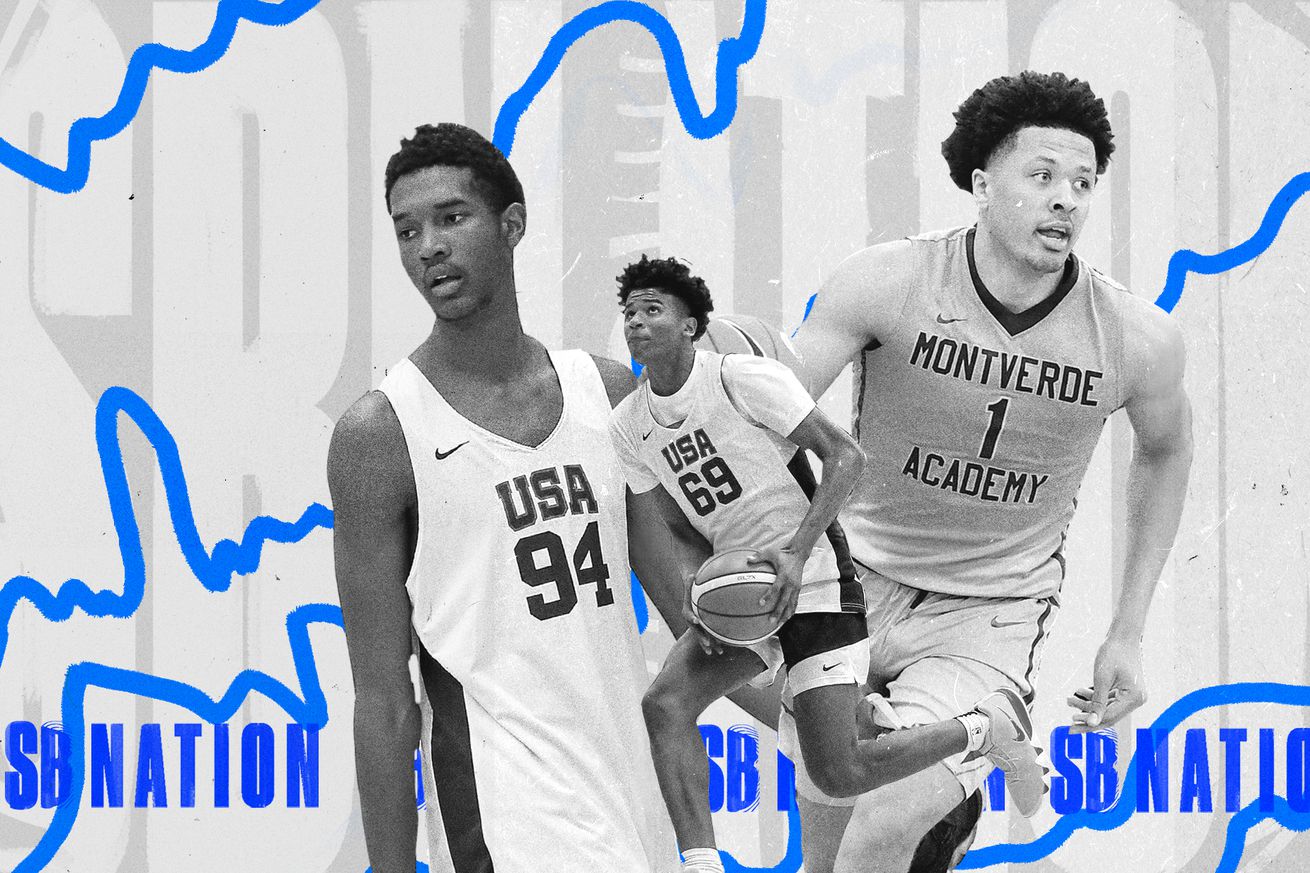 USA Basketball’s U19 team features six high school players, including some of the brightest young talents in the pipeline.

John Calipari led a roster with five future first-round draft picks that was supposed to continue the program’s stranglehold on gold medals back in 2017. Instead, R.J. Barrett shocked the Americans in the semifinals, scoring 38 points in a legendary performance that solidified his status as the consensus No. 1 overall recruit and gave Canada the top spot on the podium.

The U19 team is back this summer, and it’s looking for redemption. Bruce Weber is in charge of a roster with a fascinating blend of talent. There are six rising college sophomores in Tyrese Haliburton (Iowa State), Kira Lewis Jr. (Alabama), Isaac Likekele (Oklahoma State), Reggie Perry (Mississippi State), Trevion Williams (Purdue). There is one incoming freshman in Villanova forward Jeremiah Robinson-Earl. And then there are six rising high school seniors, headlined by several of the best long-term NBA prospects in the country.

USA Basketball has built its roster like this before. I was writing about the U19 team back in 2015, when four top high school players — Jayson Tatum, Harry Giles, Josh Jackson, and Terrence Ferguson — played a leading role in bringing the program gold. All four were first round draft picks, with Tatum and Jackson going in the top five and Giles likely joining them if not for repeated knee injuries.

This year’s team is similarly built to rely on the high school talent. Four of the six college sophomores were outside of the top-100 rankings as recruits, and all of them have weirdo skill sets that will be valuable as role players. The headliners are going to be the prep stars. Get to know these players right now before they blow up into the next big thing.

Cade Cunningham is good enough to be the first pick in the 2020 NBA Draft if he were currently eligible. While he remains a rising high school senior with no rumors about reclassification, he is actually old enough to do it but would have to make the move before the next NBA season starts to be in the incoming draft.

just as it was for Markelle Fultz three years ago. He’s grown into everything the NBA wants out of a modern lead guard, combining incredible playmaking instincts with an advanced scoring package. Since making the full-time switch to point guard last season, Cunningham blossomed as a creative passer with excellent vision who can pick apart defenses off a live dribble. He doubles as a go-to scoring option on the perimeter, using powerful downhill drives to the rim and a developing pull-up jumper to punish opposing defenses on whatever they’re giving them. He also plays with a rare poise that allows him to dictate games without getting hurried. At 6’6 with a strong frame, he has the size, strength, and competitive mindset to to be a multi-position defender, too.

Cunningham’s stock has been soaring his since his spring breakout in Nike’s EYBL league. His production has been remarkable through three sessions, averaging 25.1 points, 5.2 assists, and 6.6 rebounds per game on 63.65 percent true shooting (37.5 percent from three).

Simply put, Cunningham is the total package even if people are just starting to realize it. He’s our pick to win tournament MVP.

For all of Cunningham’s recent acclaim, he isn’t considered the No. 1 player in the high school class of 2020 yet. That’s because Evan Mobley is. The 6’11 center will be making his second go-around with USA Basketball after helping the program to a gold medal during the 2018 FIBA U17 World Cup.

Mobley is a long, fluid big man with incredible agility and soft touch around the basket. He’s impossibly quick off the floor, which helps him snatch up rebounds and dunk everything while also serving a fearsome rim protector. In addition to shooting 67.5 percent from the field during U17 play, Mobley also blocked 2.6 shots in just 18 minutes per game. As his shooting and open floor ball handling develop, he could have all the makings of an ideal modern big man.

Much of the talk around Mobley focuses on his potential, which is why this tournament will be so fascinating as a check into his current day production. We know he has great tools for a new-age center, with feet quick enough to switch screens and a rare combination of explosiveness and coordination to finish plays. This is a test of how ready he is to apply those tools today.

An MVP run is on the table. For now, the race for the No. 1 pick in the 2021 NBA Draft comes down to Mobley vs. Cunningham.

Green is the youngest player on this roster, but at 17 years old he’s already making his third trip around the world with USA Basketball. After helping the Americans to gold at the 2017 FIBA Americas U16 Championship, Green won MVP the next summer in the U17 World Cup and immediately earned an early reputation as the top player in his class.

A 6’5 shooting guard, Green is an elite athlete by any standard, blessed with a blazing first step and breathtaking explosiveness off one foot. He is going to have a massive advantage in speed and leaping ability on any player who tries to guard him in this tournament. He’s going to posterize someone during this event and the entire basketball-watching internet will collectively freak out.

This tournament is a huge opportunity for Green to prove he’s still the top dog in his class. Cunningham has come out of nowhere to surpass him in the eyes of most evaluators, and Mobley has always been considered on-par or superior. Green has unrivaled natural athletic gifts, but he needs to channel them into efficient and consistent production. He only shot 42.3 percent from the field and 28 percent from three on the adidas circuit this year. His assist-to-turnover numbers are encouraging, but a player who has been touted as a future No. 1 overall NBA Draft should be able to score more efficiently at the high school level.

Green is still a tremendous talent, but others in his age group may have caught up. We can’t wait to see how he responds to the challenge.

Barnes is also making his third go-around with USA Basketball after teaming with Green the last two summers to win gold in the U16 and U17 divisions. A long and versatile 6’8 forward, Barnes is a multi-position defender and willing passer who does all the little things to help teams win games.

Barnes has been considered a top recruit throughout his high school career for his physicality and intangibles in place of polished scoring ability. He put together a fascinating statistical profile on the EYBL this season, averaging 17.4 points per game on 51/70/18 percent shooting splits with 8.5 rebounds, seven assists, and better than one steal and one block per game. He’s a tentative and inaccurate shooter at this stage, but his passing ability is potentially special for someone with his combination of size and strength.

Barnes has competed in so many high level tournaments that it’s easy to forget he doesn’t turn 18 years old until the end of July. Like Green, there’s the lingering question of if his peers have caught up with him. If he somehow hits the 99th percentile outcome for his talent, he could be anywhere from Kawhi Leonard to Draymond Green at his peak. For now, Barnes is a masterful role player for Team USA who will do the dirty work to let others get the glory.

There’s a case to be made for Suggs as the single most impressive athlete in this field. In addition to being a top-15 national hoops recruit, he’s also a coveted quarterback recruit on the football field, holding more than a dozen offers to play both sports at schools including Georgia, Ohio State, and hometown Minnesota.

For now, Suggs is trending as a basketball prospect as a strong and athletic 6’4 point guard who averaged about 20 points per game on the Under Armour circuit while also filling box scores with rebounds and assists.

Suggs is another player going for his third gold medal in three summers with the program. Given his lack of polished outside shooting, his best role is likely as a reserve guard who provides energy and defense on the perimeter.

Williams can’t claim to be underrated anymore. The 6’7 wing made his debut on Nike’s EYBL circuit this spring and immediately broke into the top 10 of the national recruiting rankings. A pure scorer with great size, Williams averaged 21.5 points per game this spring though still struggled with efficiency at times, making 42.5 percent of his field goal attempts and 28.8 percent of his threes on encouraging volume. There’s reason to believe Williams is going to keep getting better as a shooter, especially when you look at his 88 percent mark on free throws.

Williams is here to add offensive punch for a team that’s thin on the wing. He can keep rising with a strong showing in Greece.