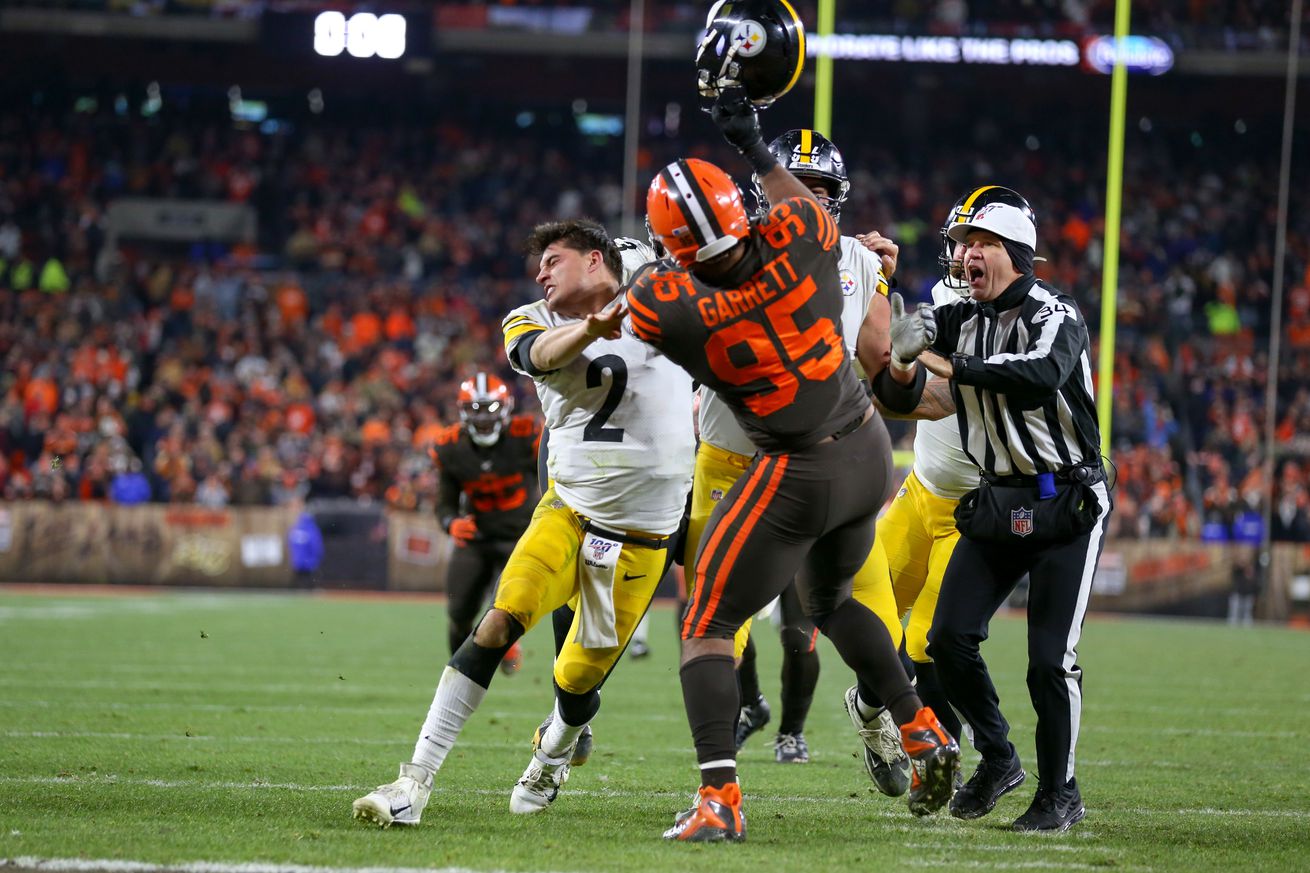 Garrett used Mason Rudolph’s helmet as a weapon on the quarterback’s exposed head, sparking a brawl on Thursday night.

The end of Thursday’s game between the Steelers and Browns was absolute mayhem. There was a brawl that had players on both teams ejected and likely suspended. But it was more than that because of the unprecedented action that started the fight.

With five seconds on the clock, and the Browns up 21-7, Cleveland defensive end Myles Garrett ripped the helmet off of Steelers quarterback Mason Rudolph at the end of a play. He then used that helmet as a blunt weapon. He swung it at Rudolph’s head, connected, and started a bench-clearing brawl near the end zone.

Steelers center Maurkice Pouncey punched and kicked a downed Garrett in retaliation. He was joined by his fellow offensive linemen in striking Garrett after he was wrestled to the ground. Then both teams got involved and it got even messier:

This is all ugly pic.twitter.com/9WQzcjZCCj

Garrett, Pouncey and Larry Ogunjobi were the players ejected on the play. You can see Ogunjobi hitting Rudolph after Garrett hit him with the helmet.

Not that it excuses anything, but Garrett’s anger can likely be attributed to Rudolph apparently trying to pull off his helmet prior to the brawl:

What was Rudolph even doing here? This is all so ridiculouspic.twitter.com/6JfHM0lD19

What the Browns and Steelers said after the game

Speaking to Erin Andrews after the game, Browns quarterback Baker Mayfield was quick to condemn the whole thing.

“I didn’t see why it started, but it’s inexcusable,” Mayfield said. “I don’t care, rivalry or not, we can’t do that. That’s kind of the history of what’s been going on here — hurting yourself — and that’s just endangering the other team. It’s inexcusable. [Garrett] knows that. I hope he does now. It’s tough.”

Mayfield was blunt when saying what it means for Garrett and the Browns going forward.

“The reality is, he’s going to get suspended. We don’t know how long, and that hurts our team. We can’t do that. We can’t continue to hurt this team.”

Pouncey was asked if Garrett should be suspended.

“Absolutely, 100 percent,” Pouncey said. “We’ll see how serious the NFL is about its players.”

He was also asked if he had ever been that angry before and responded, “I blacked out. I don’t even remember it really.”

The helmet connected with the crown of his head, but Rudolph stayed in the game for the final snap. That’s irrelevant when it comes to punishment and the public’s judgment — the intent behind swinging what is effectively a lethal weapon at the exposed head of another player is damning for Garrett.

This was an absolute disaster, and we’ll surely have plenty of follow-up information from both teams and the league office.