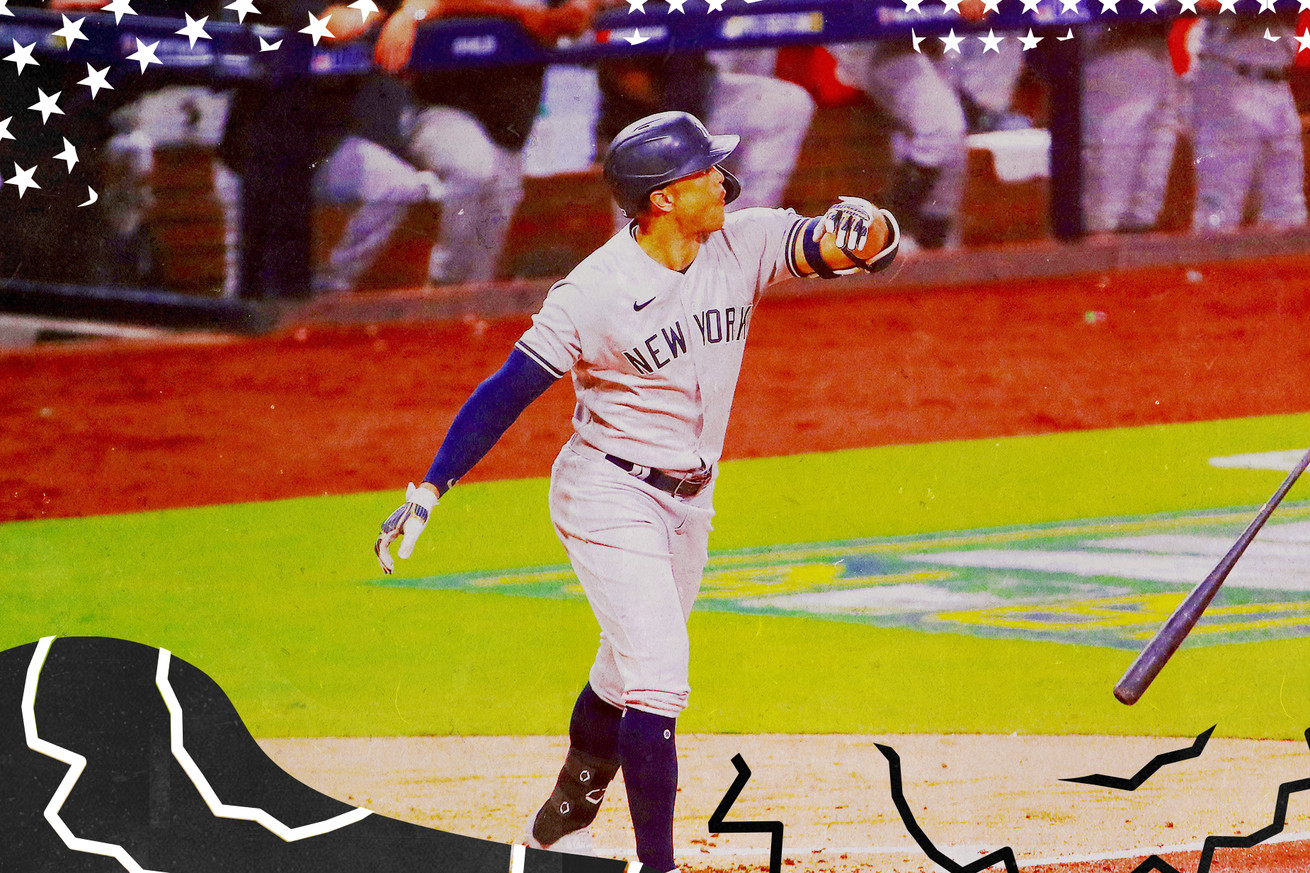 Stanton is MLB’s exit velocity king, and he’s locked in so far in the playoffs.

Giancarlo Stanton has had a couple trying seasons since being traded to the New York Yankees in the winter of 2017. Following an MVP campaign in his final season with the Miami Marlins, Stanton saw his numbers drop across the board during a productive but underwhelming first year in pinstripes. His next two seasons were a disaster: the slugger was limited to only 18 games in 2019 as he battled a knee injury, and only played 23 games this season because of a tweaked hamstring.

The Yankees have the deepest pockets in the American League, but Stanton’s inability in stay on the field while playing on a 13-year, $325 million deal was holding the team back. Pressure was mounting as fans and media openly wondered if he would ever live up to his contract.

Stanton returned to the Yankee lineup with nine games left in the regular season, and in 35 plate appearances put up a slash line of .200/.300/.400 with only one home run. If the Yankees were to go on a postseason run, they needed Stanton to quickly regain his form as one of baseball’s premier power hitters.

As soon as the playoffs started, it happened. Stanton cranked two monster home runs in New York’s Game 2 loss to the Tampa Bay Rays, giving him five dingers in four postseason games so far. It’s not just that Stanton is going yard — he’s absolutely smashing the ball right now in a way no other player alive is capable of doing.

Stanton’s second inning blast in Game 2 was a line drive cranked out of the park, leaving the bat with an exit velocity of 114.8 MPH while traveling 414 feet. Yankees manager Aaron Boone said after the game he had never seen a player take a letters-high curveball and mash it down the right field line like Stanton did.

Wow… Stanton with a LASER to right field

His 4th consecutive game with a HR: pic.twitter.com/fDOKg9qqBe

Stanton’s second dinger was even more majestic. After the Rays built a 5-1 lead in the fourth inning, Stanton came to the plate with two runners on. He absolutely unloaded on this pitch to make it a one-run game.

This ball had an exit velocity of 118.3 MPH and was estimated to travel 458 feet.

What’s even more impressive is that the rest of the Yankees’ hitters really couldn’t do much of anything against Rays starter Tyler Glasnow. Glasnow struck out 10 New York batters in just five innings of work and was touching 101 MPH with his fastball. The other New York batters got just one hit off Glasnow before he was pulled.

Stanton’s second homer against the Rays is tied for the second hardest-hit ball all season … only trailing behind another gargantuan Stanton homer from July that had a historic exit velocity of 121.3 MPH. The July dinger went down as the third hardest hit ball since the Statcast era began in 2015, behind two another Stanton bombs. Take a whirl through the previous years and you’ll notice a trend: no one hits the ball harder than Stanton.

To comprehend the degree to which Stanton is able to crush a baseball, you first need to understand that any ball that comes off the bat at 95 MPH or more is considered a hard hit ball. Stanton’s biggest blasts don’t just meet that definition — they shatter it.

Since 2015, there have been eight balls hit at 120 MPH or more. Stanton has six of them. He’s hit the 120 MPH threshold in every year since 2015, and the only other players to have done it are his Yankees teammates Aaron Judge and Gary Sanchez.

This is the player the Yankees have been waiting for since acquiring Stanton from the Marlins. It feels like they’re finally starting to get him at the most critical time.

Stanton is the third Yankees player ever to homer in four straight postseason games, joining Lou Gehrig and Reggie Jackson. His five homers through the first four playoff games are tied for the most in MLB with Juan Gonzalez in 1996. He’s also the first Yankee to ever get four or more RBI in consecutive playoff games.

It’s clear Stanton is fully locked in right now. This Yankees lineup is finally healthy, and it will be absolutely terrifying if Stanton stays this way. Every at-bat is must-see.