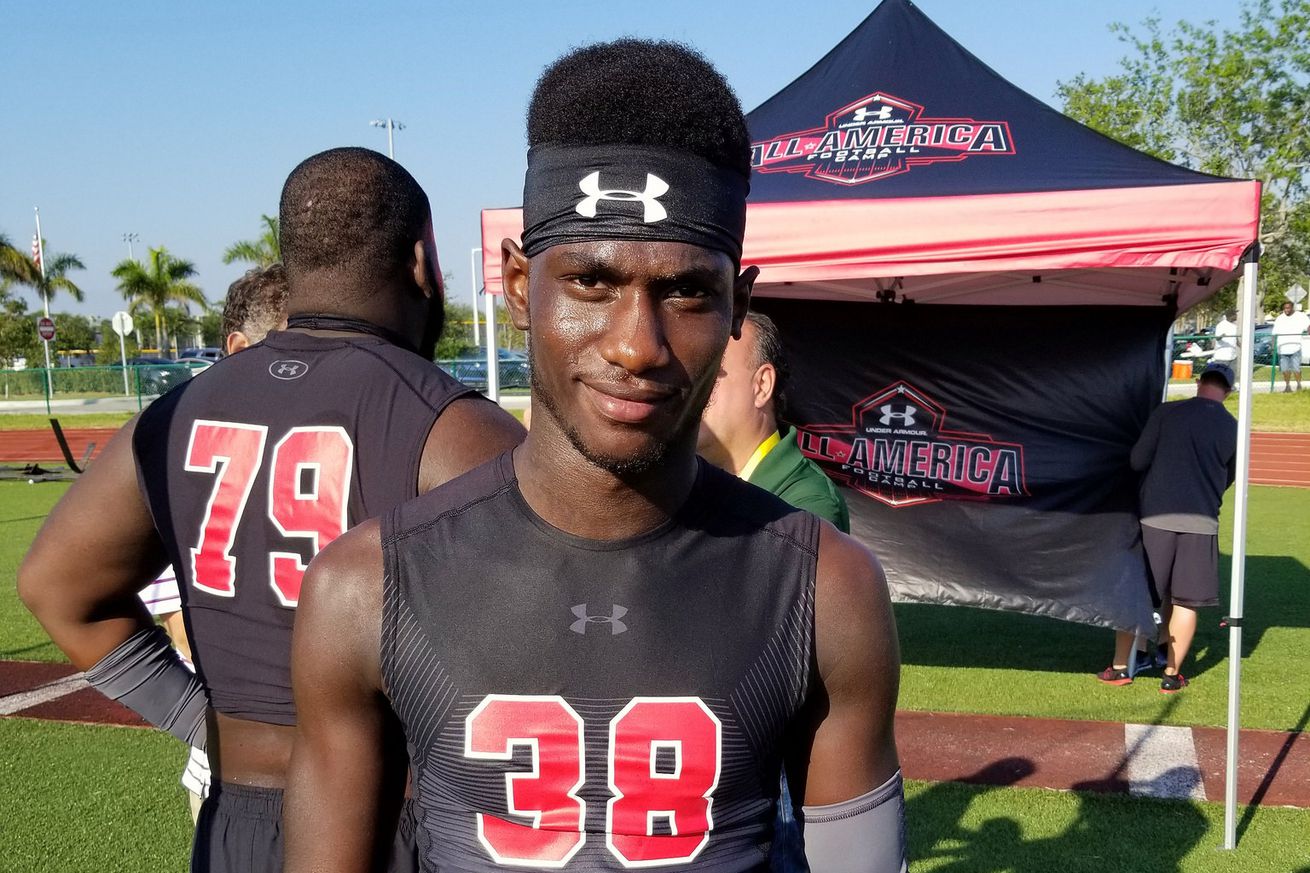 Where will the big National Signing Day decisions land?

We’ve reached the point where the majority of the country’s top 2019 prospects are already verbally committed to some school or another. Most of those commitments will stick, though not all will.

This post is a rundown of six of the highest-rated prospects who have not yet signed with a school. National Signing Day is Wednesday, February 6.

Wright is an elite tackle prospect, one of the most athletic in the 2019 class. He has long been linked to Tennessee, though he also considered Ohio State and Alabama. The Vols need a ton of help on the offensive line and Wright could be an early contributor.

Prediction: Tennessee here is one of my most confident picks of the cycle.

Pickens is perhaps the highest-upside receiver in the class. He has been committed to Auburn since July of 2017. But he has been open about being recruited by others, including Georgia, Miami, LSU, and Tennessee. At the Under Armour Future 50 event, Pickens said the only school with a real chance to flip him was LSU. But his HS QB is Bo Nix, Auburn’s QB signee in the class. And he made an unofficial visit to Auburn over the weekend.

Prediction: Pickens is an important prospect for War Eagle, and I’ll project Auburn to hold on.

Prediction: I expect him to pick Clemson, but I am less confident in what he’ll do come the 2019 MLB draft this summer.

Just a month ago, Bogle was on stage at the All-American Bowl committing to the Alabama Crimson Tide. But much has changed since then, including Alabama’s outside linebackers coach, Tosh Lupoi, leaving to take a job with the Cleveland Browns. Lupoi would have been one of the key position coaches for Bogle, and without an official visit left available to take to Alabama by virtue of having already used it, it could be tough for Alabama to hold on.

Since then, while Bogle has not decommitted from Alabama, he has taken official visits to schools closer to home in both Florida and Miami.

Prediction: The Hurricanes have long been one of Bogle’s top teams, and with the hire of defensive coordinator Manny Diaz as head coach, I’ll call for the flip from Alabama to Miami.

Sopsher has been one of the highest-profile recruits in the 2019 class for many years now. And yet, his recruiting suitors have remained the same during that time: LSU and Alabama.

I profiled Sopsher here, in ”6 surging, unsigned recruits to know before National Signing Day,” and discussed the role his brother, a JUCO recruit, will have in his recruitment.

Prediction: Ultimately, LSU head coach Ed Orgeron should be able to get this done. He was a defensive line coach by trade, and LSU is the home team. LSU also received the last official visit, following Sopsher’s trip to Tuscaloosa.

Elam has both a high floor and high ceiling. He’s an elite DB with length and athleticism. He comes from a football family featuring multiple NFL relatives. And he’s relatively young for his grade level. Florida has long had the connection here, thanks to his uncle Matt playing on the Urban Meyer Florida teams, of which Dan Mullen, now UF’s head coach, was the offensive coordinator. His father, Abram, played for Urban Meyer and Mullen at Notre Dame.

But Georgia has also made a push, hiring away DB coach Charlton Warren after the Early Signing Period. And the Bulldogs have been very good lately recruiting South Florida.

Prediction: In the end, this feels like Florida due to the family connections and strong 2018 season by the Gators.

Thibodeaux is one of the best prospects in the nation. He is 6’4, 240, and has elite burst off of the edge. He has strongly considered Alabama, Florida State, and Oregon throughout the process, and has also visited Florida and USC.

Prediction: Oregon seemed to have all the momentum following its upset win over Washington with Thibodeaux visiting. But there has been some recent slight optimism out of the Alabama and Florida State camps. With low confidence, I’ll say he sticks on the West Coast and signs with the Ducks. (Correct)

Keegan is a 6’6, 310-pound mauler of an offensive tackle. Michigan people have been confident in him signing with the Wolverines for more than a year now. He also took official visits to Ohio State, Clemson, Georgia, and Penn State.

Prediction: I’m not expecting any drama here, and think Michigan is the obvious pick. (Correct)

Daniels is a talented passer from Southern California. He has a strong arm, a whip-like release, and is plenty athletic as well. Most of the Pac-12 powers have offered.

Prediction: I’ve been unsure of where Daniels would go for a while. With USC not taking a QB this cycle, and UCLA taking Chase Griffin out of Texas, it’s clear Daniels will leave the state. Arizona State seems to have the momentum here, so I’ll take the Sun Devils. (Correct)

Cain has excellent balance and vision. He’s a smart, winning football player. Cain has ties to LSU and Texas, and also considered Penn State heavily during the process, among others.

Prediction: I’ve thought Cain was going to Texas since the summer of 2017, but since there’s a lot of Texas smoke involving Trey Sanders (see above), and since I know Cain and his family love Penn State, I’m switching and going with the Nittany Lions. (Correct)

Putnam is an excellent interior line prospect and a champion wrestler. He plays with great balance, leverage, and toughness. And he’s from a powerhouse program. Auburn, Clemson, and Florida State are the three schools in the running.

Prediction: I truly do not know where to pick. Putnam isn’t from Florida, so he didn’t grow up with a loyalty to the in-state schools. I have solid contacts at all three finalists, and can say with confidence that all three are hopeful, but none believe they have him locked up. Since it is getting down to crunch time, I’ll go with the school that has been on him the longest: FSU. (Incorrect, Clemson)

Stripling has an excellent size, athleticism, and frame combination. His recruitment is a throwback Big 12 battle between Oklahoma and former conference member Texas A&M.

Prediction: I think Oklahoma has this one thanks to his relationship with the staff and opportunity to potentially play early. (Correct)

Sanders is a 6’0, 215-pound running back with impressive burst. But he can also run over defenders. Sanders would fit in just about any offense. The primary two schools in this race are Alabama and Florida. Florida took Sanders’ brother, Ulmstead, as a walk-on linebacker out of junior college in 2018.

Prediction: This has been a wild recruitment. Texas has been mentioned, and so has Texas this week. I had a source tell me that Alabama’s confidence with Sanders has decreased since the departure of Mike Locksley. And Georgia folks are suddenly very confident. While it wouldn’t surprise me if this is all smoke and Sanders ends up at longtime favorite Alabama, but Georgia sources are so confident following his recent visit. So Georgia it is, in a signing nobody saw coming a month ago. (Incorrect, see note below)

In a spread era in which it is tough to find great linebacker, Dean really stands out. He can run sideline-to-sideline, but he is also a major hitter. Every major SEC school has offered, and this will be a battle between Alabama, Georgia, Ole Miss, and Texas A&M.

Prediction: Georgia feels confident Alabama believes it can has a great shot. Ole Miss believes. Dean does not do many interviews, and has left multiple schools feeling confident following visits. I’m going to stick with my pick of Alabama, but everyone is confident and no source seems ready to say it is a done deal. (Incorrect, see note below)

Note: it would not shock me at all to see Sanders go to Alabama and Dean to Georgia. (This is what happened)

Harrison is an absolute freak of a defensive end, with perhaps the highest upside of any player in the class. He is 6’5, 240 with plenty of room to grow, and hit athleticism is off the charts.

Prediction: Ordinarily, a player from Ohio this close to Columbus would be considered a lock for the Buckeyes. But Michigan has made this very interesting, and OSU just went through a coaching change. Still, I’ll go with Ohio State in a pick that I wouldn’t bet on (correct).

McCoy is one of the most special athletes in the nation. With the ball in his hands, he is a threat to score no matter the down or distance. He’s a strong competitor who wins contested balls. And he could also be a stud on defense.

Prediction: This is shaping up as a USC v. Texas battle. I think that USC’s hire of Kliff Kingsbury could help USC, along with the obvious distance factor in its favor. (Correct, though he has since elected to transfer to Texas)

Evan Neal is an elite 6’7, 350-pound offensive tackle who destroys opponents in front of him. And he shows greater lateral quickness in pass protection than you’d expect out of such a large player. Alabama and Miami are the top two true contenders.

Prediction: While Neal has extensive ties to Miami, he was once an Alabama commit, and I predict he will be again. Neal has never seemed to care about early playing time, and if that’s truly not important to him, then Alabama seemingly has the advantage in almost every other area over its competitors. (Correct)