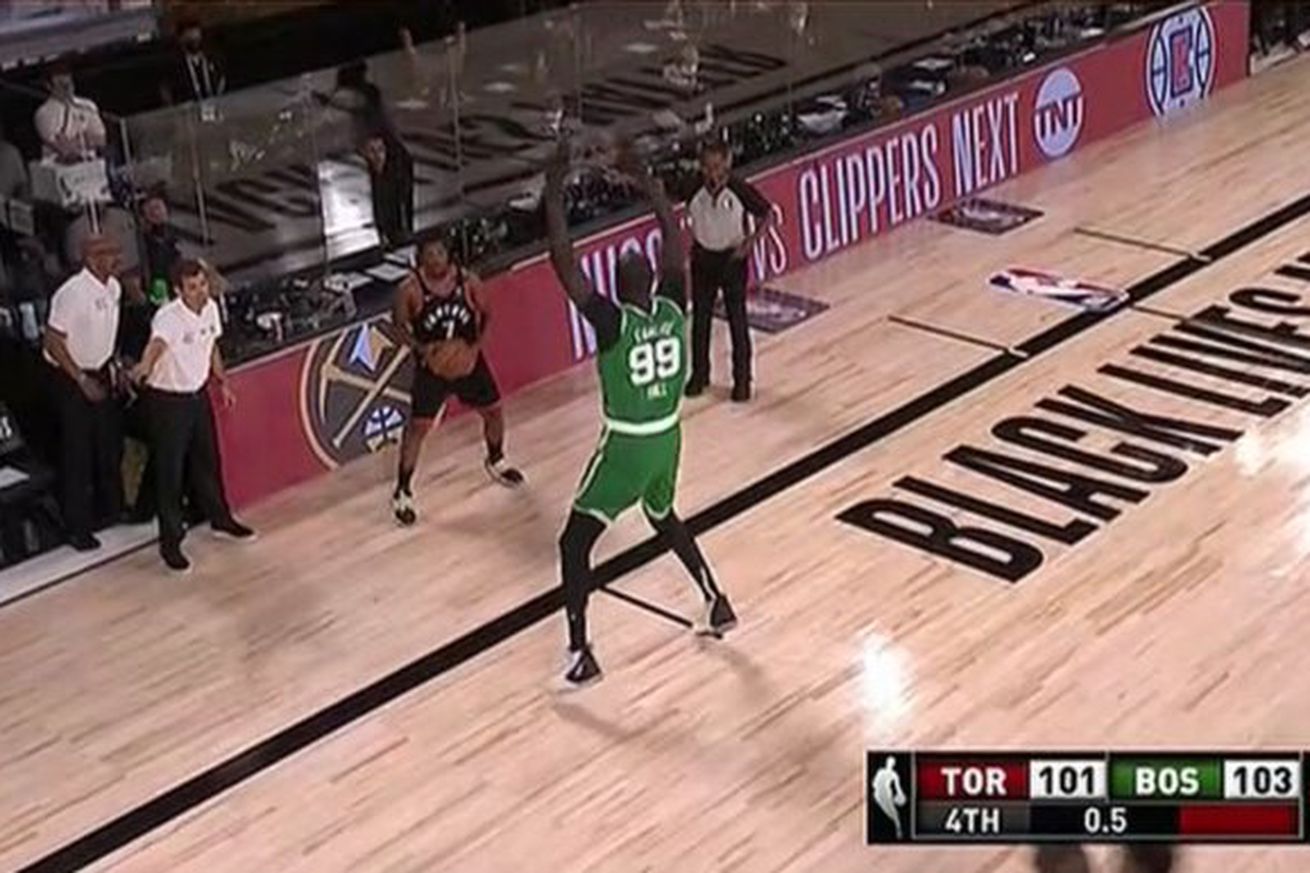 Both the Toronto Raptors and Boston Celtics had to feel like their second round playoff series was on the line in Game 3. Boston had surged out to a surprising 2-0 lead in the series, slicing up Toronto’s vaunted defense in the halfcourt while stifling the Raptors’ scorers in similar situations. The coronation of Jayson Tatum as a superstar was underway, Pascal Siakam was struggling, and the Celtics were on the brink of a trip to the conference finals if they could just take care of business again in Game 3.

Of course, the defending champs weren’t going out that easily. A back-and-forth game gave way to one of the great endings in playoff history, culminating in an impossible sequence to give Toronto a win and keep their dreams of repeating alive. The Raptors’ 104-103 victory in Game 3 is an instant classic, and it will be remembered for a long time for a variety of reasons.

For as many indelible moments as the last 30 seconds had, we’re stuck on one part in particular: Kyle Lowry’s ridiculous pass over 7’5 Tacko Fall that led to OG Anunoby’s game-winning shot. It only further burnishes Lowry’s reputation as a big game player and champion. Here were our favorite things about Lowry’s pass.

After Fred VanVleet hit a dramatic layup to tie the game with about 20 seconds left, the Celtics put the ball in the hands of Kemba Walker and asked him to win them the game. Toronto sent a hard trap at Walker after a screen from Marcus Smart, sending two terrific defenders in VanVleet and Marc Gasol at Walker to pressure him to give up the ball.

Instead, Walker shook both Raptors and made his way into the lane, where he coerced Siakam to step up only hit the man he was defending, Daniel Theis, with a beautiful bounce pass for the go-ahead bucket.

ASSIST of the Night: September 3rd

We haven’t seen Walker in many meaningful games in his pro career, but his clutch delivery to Theis to put Boston up by two with 0.5 seconds left on the clock was reminiscent of his college heroics at UConn.

Walker’s heady play would have made Game 3 a classic by itself, but half a second was just enough time for the Raptors to author their own fairy-tale response.

OG Anunoby hit the game-winner and had the perfect reaction

The Raptors had 0.5 seconds left to tie or win the game, otherwise they were going down 3-0 in the best-of-seven series. Third-year wing OG Anunoby wasn’t the first option on the play, but after a defensive breakdown by Boston left him open, Anunoby hit a miraculous catch-and-shoot three-pointer to give Toronto the win.

How did he get this off in time? Anunoby’s sense of timing on this shot was remarkable. Apparently 0.5 seconds is just enough for a catch-and-shoot.

OG AT THE BUZZER! pic.twitter.com/44YbQ6E4Lk

Anunoby didn’t celebrate like he saved his team’s season. Instead, he just calmly walked back towards the bench until his teammates mobbed.

Your favorite player is not as cool as OG Anunoby.

Anunoby’s “comments” post-game were even better.

Easily the coolest human on the planet. pic.twitter.com/AmZ4TnpYCk

It’s so great to see Anunoby get this moment after he missed all of Toronto’s championship run last year following an emergency appendectomy. There are so many more big moments in his future.

Jaylen Brown took responsibility for the Celtics’ defensive breakdown at the end of the game. Read Celtics Blog for Boston’s perspective on what happened in the final seconds. Keith Smith at Celtics Blog also has a terrific read on Boston’s heartbreak and everything leading up to it in Game 3.

Boston checked 7’5 backup center Tacko Fall into the game to defend the final inbounds pass. Nick Nurse put the ball in Kyle Lowry’s hands and asked him to make a play. Lowry, who is listed at just 6’0, somehow was able to see Anunoby in the corner after his other options broke down and then delivered a pass that had the perfect amount of both loft and velocity to land directly in Anunoby’s shooting pocket.

Seriously, how did Lowry make this pass?

This angle was the best. What a perfect pass! Even more impressive when you know his inner clock was telling him he needs to get rid of it over the 7 foot 6 guy! @Klow7 is still underrated #RTZ #WeTheNorth pic.twitter.com/Tu1BCT0Q7f

Kyle Lowry saw and threw the series-saving, game-winning dime over this pic.twitter.com/bK8w6Aw1LB

Lowry truly did not have an inch of daylight when he was making this pass. If he delivers the pass too low or too high, Anunoby wouldn’t have time to get the shot off. It had to be right on the money with only 0.5 seconds left, and Lowry did it.

Here’s the game-winner in four different camera angles to help you appreciate just how great Lowry’s pass was.

If you thought Lowry’s pass was good, his reaction might have been even better.

This was a smile all of Canada could feel.

Kyle Lowry is SO happy! pic.twitter.com/jpMsPBn3oQ

Of course, there were memes:

To hear Lowry tell it, he had the throw the pass over a “7’12 guy.” He’s not exaggerating by all that much.

“I got a 7’12’’ guy on me, but I just waited and OG, he’s been shooting lights out the last couple weeks.” @Klow7 on the @Raptors game-winning play to take Game 3. pic.twitter.com/1lhaWVuyAI

It’s hard to remember any other plays in NBA history like Anunoby’s game-winning buzzer-beater. A catch-and-shoot with 0.5 seconds left, a ridiculous inbounds pass, sky-high stakes with a playoff series hanging in the balance.

There’s only one other play that comes to mind: this absurd Jason Kidd inbounds alley-oop pass to Shawn Marion to beat the Houston Rockets a decade ago.

Not exactly a catch-and-shoot, but still one of the great end-of-game passes ever made.

This is the company Lowry is now in. What a moment. You can bet a 2-1 series deficit sounds a lot better to the Raptors than 3-0.