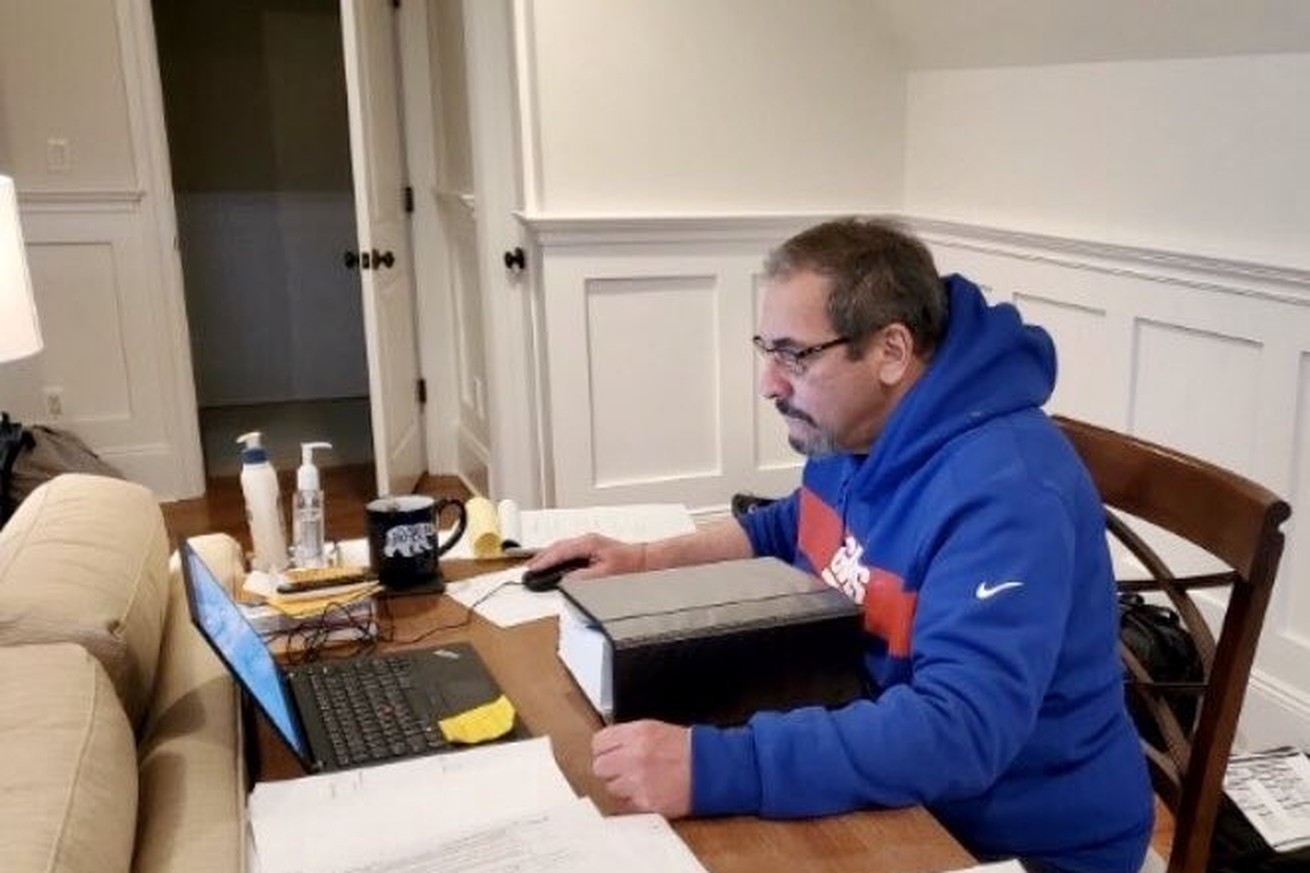 The first virtual, fully-online NFL Draft starts tonight, which has given us an opportunity to take a glimpse inside the brain trusts leading teams to see how everyone is setting up for the occasion. It’s a rare, beautiful opportunity to see what happens when some of the least technologically-advanced people in sports (football coaches) are forced to cobble together workstations to adapt to one of the highest pressure weeks on their calendar.

Let’s appreciate every home office we’ve seen so far, and rate them!

GM Eric DeCosta checking in with a tour of his Draft room setup: pic.twitter.com/Sqb6GfLY5A

This set up all makes sense, but it feels a little claustrophobic.
Needs more elbow room. 5/10.

That’s a lot of stuff daisy-chained together off a USB hub.
Lacks a big screen. 4/10.

I don’t understand running multiple computers vs. one huge rig.
Too vertical, bad use of space. 5/10.

This looks quite comfortable. Not much desk clutter.
I’d sit here. 7/10.

All set for the 2020 @NFLDraft from inside the Caldwell Theatre. pic.twitter.com/MhmRC8YbWN

Excellent seating. Addition of snack bar is a welcome touch.
Shame it’s just a folding table covered with a cloth. 8/10.

Chargers GM Tom Telesco is a man after my own heart with his Telework set up. Screens, check, TV, check, stuffed moose you’ve dressed up so you feel less weird having one way conversations with, check. #NFLDraft pic.twitter.com/zwKqVhgwg6

Scene from the Covid-19 era: Here’s #Rams coach Sean McVay showing off the #NFLDraft “command center” at his home as he and GM Les Snead did a video chat with reporters today. I saw at least 6 screens. “It looks like I could set off a rocket ship at this thing, man,” McVay said. pic.twitter.com/2SK3mcLm5x

I can’t get a good look at this, but it seems fine.
Slightly concerned Sean McVay has the launch codes. 6/10.

Stitching six monitors together so it looks like the TV section of a Circuit City in 2003 is unnecessary. Could have just as easily been a single giant panel.
Nostalgic, but not in a good way. 4/10.

Only if she’s Tech savy! pic.twitter.com/k6D4RWEkjU

Dave Gettleman trying to figure out what the Chargers want for Antonio Gates pic.twitter.com/oEbwhtGENd

Dave Gettleman is sitting on a dining room chair. Has one laptop he seems confused trying to use. A whole bunch of loose paper and it appears he doesn’t even own a mouse pad.
God help the Giants. 0/10.

This is a professionally organized workstation. Everything has a place. Everything makes sense.
I’m jealous. 10/10.

The ultra wide curved monitors are an unnecessary flex.
Tries too hard. 5/10.

You lead from the front and by example – lessons learned from my father’s experience in the @USArmy. It has guided me through life and to my job as new HC of the @redskins. Thanks to @USAA for sharing our behind-the-scenes look @ #NFLDraft prep #SaluteToService #HTTR #USAAPartner pic.twitter.com/KW4f4gkLeB

This workstation is fine. The video for it is so bad it’s incredible. Ron Rivera is not a natural actor and pretending to actually be talking about draft picks during this is the best.
4/10 workstation. 10/10 video.