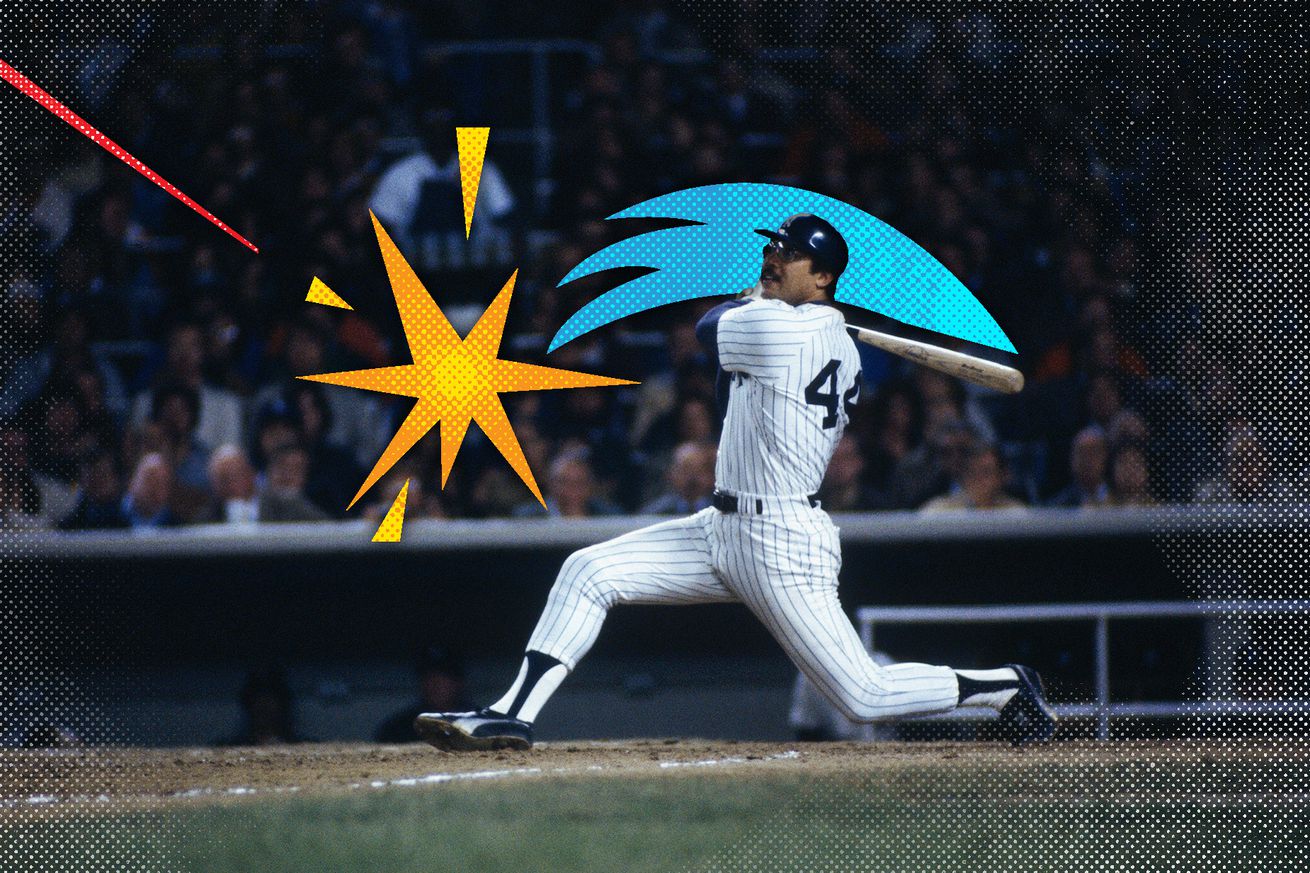 Over his postseason career, Reggie Jackson hit for a .278 average with 18 home runs, 48 RBIs and 41 runs, making him one of the most productive players in playoff history. He won the World Series MVP award twice, in 1973 and 1977.

For nearly a decade, Jackson did the impossible. By the numbers, he was merely an average hitter in the regular season. But come every October, he shifted into another gear. Whatever setback or obstacle he faced, he bounced back. He hit harder. He became a rarified talent. It raised the question: What makes Reggie Jackson so special?

“Clutch” is a widely debated term. Sabermetrician Bill James once wrote, “How is it that a player who possesses the reflexes and the batting stroke and the knowledge and the experience to be a .260 hitter in other circumstances magically becomes a .300 hitter when the game is on the line? How does that happen? What is the process? What are the effects? Until we can answer those questions, I see little point in talking about clutch ability.” James isn’t wrong, yet to say that Jackson wasn’t clutch would be sacrilege. “Clutch” might be the thing he was most destined to become.

As a high school athlete, Jackson participated in football, basketball, baseball, and track and field. His athletic career nearly ended when he fractured five cervical vertebrae in the final football game of his junior year. Jackson was told he’d never walk again.

He persisted anyway. Recruited heavily for football, Jackson accepted a scholarship to Arizona State University. He tried out for the baseball team on a $5 bet (who else but Jackson could begin a Hall of Fame career on a bet?), and hit a home run on the second pitch he saw, all while wearing his football equipment. He’d quit football after one season to focus on baseball full-time. In 1966, during his sophomore season, Jackson broke the team record for most home runs in a single season and was named a first-team All-American.

The Kansas City Athletics selected Jackson second overall in the 1966 Major League Baseball draft. During his first season in the minors, he split his time between Lewiston and Modesto, hitting .297 with 23 home runs. The following year, he was promoted to Double-A Birmingham, batting .293 with 17 home runs and 58 RBI in 114 games. The numbers raised expectations for Jackson as a hitter high.

Jackson made his major league debut with the Kansas City Athletics on June 9, 1967. He played in just 35 games, batting .178 with one home run and six RBIs; not quite the splash one hopes to make in their debut. In another year, the Athletics franchise would relocate from Kansas City to Oakland.

During his first season in Oakland, Jackson hit .250 with 29 home runs and 74 RBIs. He struck out a career-high 171 times, leading the American League in whiffs. Yet even with the strikeouts and low production, Jackson finished 17th in the 1968 AL Most Valuable Player award race. He had nearly 100 more strikeouts than RBIs that season, but voters saw potential.

Jackson would receive MVP votes in seven of his eight seasons with Oakland, though he never recorded a batting average above .300, topping out at .293 in his MVP-winning 1973 season. He led the league in strikeouts and home runs twice, and RBIs just once (in 1973). Yet even the heights of his regular season success couldn’t foreshadow his postseason career.

Even then, Jackson took his time becoming “Mr. October”. In 1972, the A’s repeated as AL West division champs and played the Detroit Tigers in the American League Division Series. In Game 5, Jackson stole home to secure the lead, but he tore his hamstring in the process, leaving him unable to play in the World Series. Though he had been instrumental in the A’s success, a setback forced Jackson to watch his team win its first championship in 42 years.

In his return for the 1973 season, Jackson led the Athletics to their third consecutive AL West pennant. Oakland advanced to the World Series again and, this time, Jackson was in the lineup. Against the New York Mets, Jackson came up big, hitting a two-run home run in Game 7 to help propel Oakland to a 5-2 victory and secure its second consecutive championship.

Though his tenure in Oakland ended after the 1975 season, Jackson’s legend had only just begun.

A left-handed hitter who stood with his feet wide apart, Jackson doesn’t refer to his hitting stance as open or closed, but parallel. Strictly a power hitter, he didn’t get his power from his stance, but from his arms, legs, and timing. According to Jackson, “How you walk to the plate can be important. You can tell which hitters ‘own’ which pitchers just by how they go up there. In a game situation, I might go into that act even if I don’t hit that pitcher too well. Hey, maybe he doesn’t remember.”

Jackson’s confidence made him a legend in the making to his contemporaries. Catfish Hunter told the New York Times in 1976, “He can be a lot of things, but he can help a club a lot more than he can ever hurt it. You know he’s going to talk a lot, but you know he’s going to produce a lot along with that talking. Everybody in Oakland respected him because we knew when he got hot, he could knock in enough runs to carry the whole team. If he gets hot, at Yankee Stadium, he could hit 60 home runs.”

Hunter’s words proved to be prophetic. After one dismal season with Baltimore in 1976, Jackson, in a game-changing free agent signing, joined the New York Yankees with a five-year contract totaling $2.96 million. Jackson solidified his mythos in New York City. He helped the Yankees win two consecutive World Series in 1977 and 1978.

During batting practice before Game 6 of the 1977 World Series, Jackson hit three pitches into the third level of Yankee Stadium’s seats. It was a kind of foreboding. In the second inning, Burt Hooton walked him. But in the fourth, Jackson hit the first pitch into the right field bleachers. Then, in the fifth inning with two out and two on, he hit another first-pitch home run, this time off of Elias Sosa. And in the eighth inning, Jackson made history. He hit the first pitch he saw from Charlie Hough into the centerfield bleachers.

Those moments cemented Jackson forever in baseball lore, but they may also be an example of how a human desire to believe in heroics can create narratives out of coincidences.

Clutch hitting has been studied for decades. Dick Cramer, the first baseball analyst to attempt to disprove clutch hitting, published “Do Clutch Hitters Exist?” in SABR’s Baseball Research Journal in 1977 and found that clutch hitting was more a matter of chance than skill. Then in 1985, the Elias Sports Bureau came up with its own definition of clutch to challenge Cramer’s findings. It looked at how hitters performed in late-inning pressure situations, or LIPS, which is defined as any at-bat in the seventh inning or later, with the batter’s team trailing by three runs or less (or four runs if the bases are loaded).

By that measure, Jackson wasn’t a clutch standout. He hit .344 in LIPS, which made him a roughly 25th percentile clutch hitter. But the metric has its limitations. LIPS’ strict parameters creates a lot of small samples sizes that lead to wonky conclusions. For example, according to Elias, the single-best clutch performance between 1974 and 2003 was by Manny Trillo, who batted .466 in LIPS in 1981. No one considers Manny Trillo to be clutch.

Others tried to solve the clutch conundrum. In 1990, Pete Palmer published a study that found no difference between the actual distribution of players’ clutch stats to what would be observed if performing in the clutch was completely random. In 2004, “The Book” — written by Tom Tango, Michael Lichtman, and Andy Dolphin — attempted to prove the existence of clutch hitting by using on base percentage instead of batting average. It did discover evidence of clutch performance, finding that roughly one in six players have a .008 OBP improvement in clutch situations. A study by statistician David Grabiner then took issue with that meager finding and found that “the correlation between past and current clutch performance is .01, with a standard deviation of 0.07. In other words, there isn’t a significant ability in clutch hitting. If there were, the same players would be good clutch hitters every year.”

The body of study isn’t conclusive, but it does not support Jackson (or anyone, really) as a clutch hitter. He struggled in the ALCS, his postseason batting average over 11 appearances in the championship series a paltry .227. He actually earned the name “Mr. October” after Thurman Munson used the name sarcastically after Jackson hit .125 in the 1977 ALCS.

But Jackson himself doesn’t buy the idea that clutch hitting is a fallacy. “Are you telling me that when you’re down to one shot, Michael Jordan is no different from anybody else?” he told Sports Illustrated in 2004. “How can you tell me Tiger Woods doesn’t play better under pressure? Jack Nicklaus was the same as anybody else?” Sabermetrics can’t account for the magic of a big moment.

No one believed in Jackson quite the way Jackson himself did, and then confidence in the face of facts undeniably contributed to his greatness. He stole bases, drove in runs, hit for power and he had the swagger to go with it. “I am not merely a baseball player,” he said. “I am a black man who has done what he wants, gotten what he wanted and will continue to get it.

“You see, on the field I am a surgeon,” Jackson added. “I put on my glove and this hat. And I put on these shoes. And I go out on the field, and I cut up the other team. I am a surgeon. No one can quite do it the way I do.”

Not a particularly “smart hitter,” Jackson finished his career with more strikeouts than hits. And yet, when he hit, it counted. He showed up to swing hard and hit home runs, once saying he’d “rather hit than have sex.”

Jackson needed just three swings of his bat to become known as one of the most clutch hitters in baseball history. He was a man of the big moment. It seemed as if the pressure made him a better, more focused hitter, despite what his numbers might say.

To many, the idea of a player being “clutch” is a myth because it can’t be properly measured. But maybe the idea of clutch hitting doesn’t need to be supported by science or math or fancy stats. That’s what Jackson made us believe, anyway, every time he hit one out of the park whenever the Yankees needed it.

That belief may be unfounded in reality, but that belief, in Jackson’s case, only makes his story better. And in that case, why would anyone ever question the legend of Mr. October?