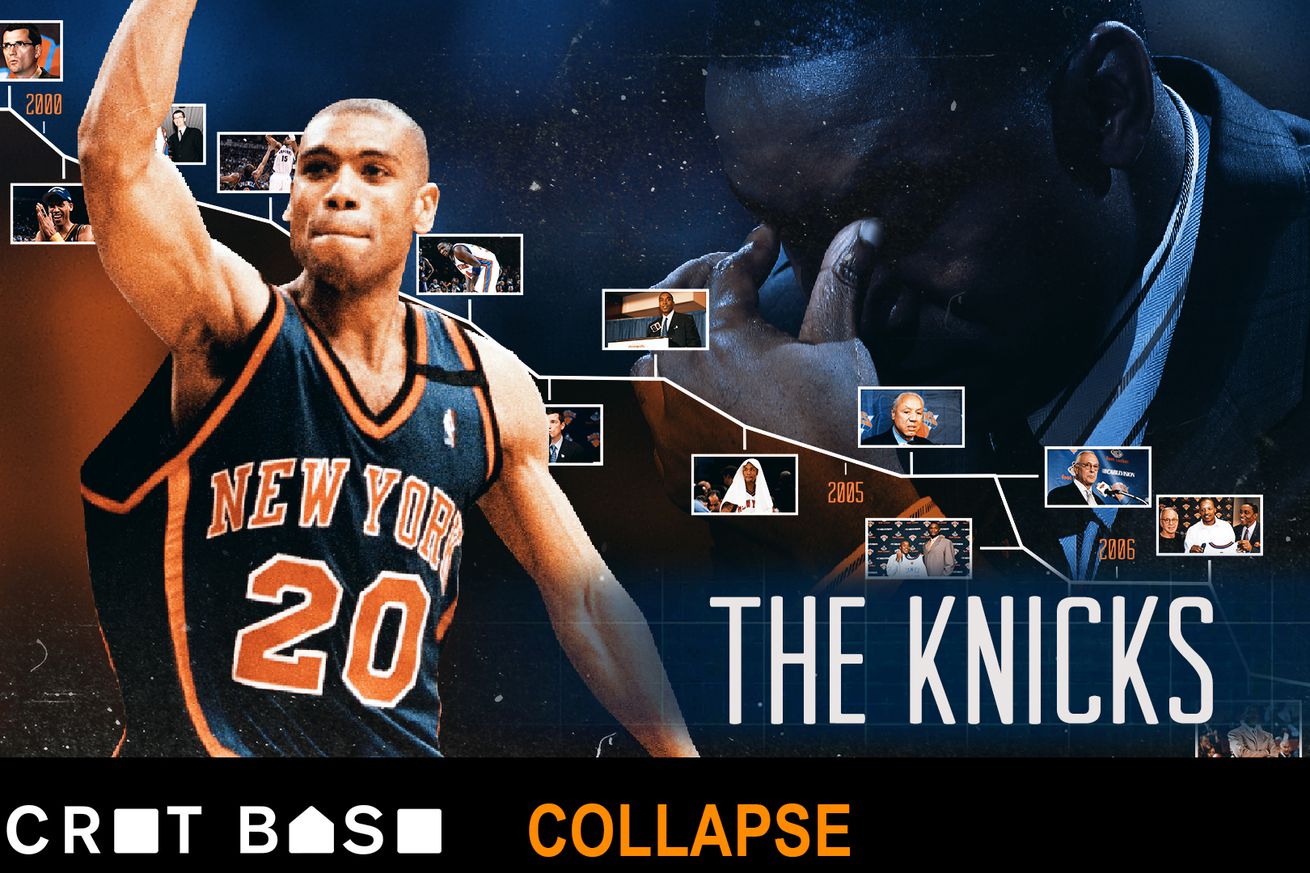 Checking in on our episode of Collapse about the New York Knicks, 20 years after it all started.

Above is an episode of Collapse we published in 2019. It explains how the New York Knicks, who were very good during my childhood in the 1990s, became mostly horrible over the next two decades. So much of that has to do with James Dolan inheriting and exerting control over the franchise. But if you’re looking for an acute, basketball-related turning point, September 2020 marks the 20th anniversary of that turning point, although it’s more like a mushy blob of eraser marks than a ‘point’ per se.

Patrick Ewing is the greatest Knick in recent memory, and among the best centers in NBA history. The 1999-2000 season was Ewing’s 15th in the league, and at its conclusion — yet another playoff loss to the Pacers — the career Knick had only one year left on his contract. The 37-year-old professed a desire to extend that contract and play into his age-40 season, be that in New York or elsewhere:

“I’d probably like to play two more years after next year. If it’s New York, it’s New York. If not, it’s somewhere else.”

If that sounds weirdly dismissive for a guy who’d spent his whole, brilliant career with one team, I can explain. As 7-foot-tall people in their late 30s are wont to do, Ewing hurt himself over those last couple seasons in New York. Over the course of some playoff runs, including a shocking trip to the 1999 Finals, people whose business is to wonder aloud began to wonder aloud whether the Knicks were better without their star center. It became a bit of a meme. Even NBA players said it:

“Look at the percentage with or without him,” said Indiana center Rik Smits, who had 21 points in the first half of Game 3, but totaled 17 over the next six quarters. “I hope he comes back.”

So the vibes were poor. And Ewing’s knee surgery in the summer of 2000 did not help his quest for an extension. Rather than find some resolution, Knicks general manager Scott Layden decided to trade Ewing. In late August, Layden assembled a truly hideous blockbuster deal. Just gaze upon this bad boy:

The tabloids said GOOD RIDDANCE … and then the trade fell apart. The Detroit Pistons backed out of their role as dumping ground for rando contracts, so Ewing remained a Knick.

Reconstructing a trade that convoluted is difficult. Doing so with the pressure to exchange a legend for fair value while every other team knows how desperate you are to offload said legend is … well, it proved impossible. Layden’s choices were to either keep Ewing and figure things out or to accept a dogshit trade. In late September, he chose the latter.

Glen Rice never really fit with the Knicks. None of the rest of those guys ever mattered to the Knicks, and the accompanying draft picks the Knicks received amounted to nothing, because Layden got rid of them.

In 15 seasons with Ewing on the roster, the Knicks won 17 playoff series. In the 20 years after their trade fuck-up followed by a month of awkwardness and an even worse trade, they won one playoff series. So yeah, I’m just gonna go sit in the ocean for a sec if you don’t mind.