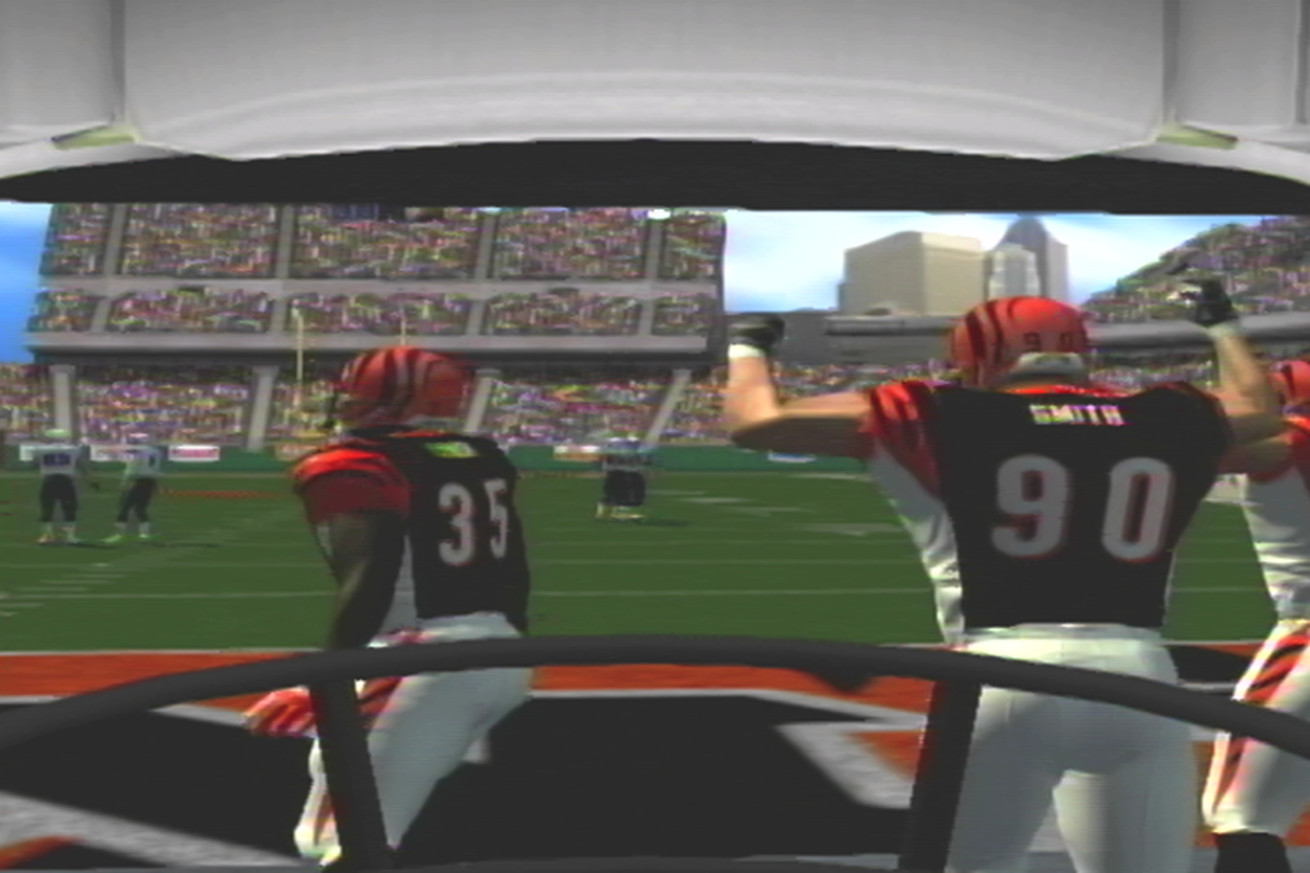 The helmet mode gave you a new experience at each position. Let’s break it down.

ESPN NFL 2K5 is a great game to look back on for nostalgia purposes. It’s also a great way to get easy retweets if you’re a brand account on twitter. Just say something like “Who else misses this game?” and that’s at least a thousand retweets right there.

I’ve not above the nostalgia spamming either. I’ve written about 2K5 Michael Vick and The ESPN 25th anniversary game mode. I also talked about ESPN First Person football for the first video that I made on my personal channel. Looking back, however, I didn’t really go in depth about how the NFL 2K5 game made me play each position. That changes today. We’re going to go through all the positions in First Person Football and dig into how each one operates and plays.

Playing quarterback in First Person Football mode is one of the most dynamic experiences in sports video game history. That said, this is easily the most hectic position in the game. You have to read all the routes at a camera angle where it’s hard to tell you who’s open. Trying to read a defense while waiting for a route to break is one of the most challenging things I’ve tried to do, ever. As someone that never played football I can’t even begin to comprehend how the fuck quarterbacks live like this. Here I am throwing what I think is an open post route, only to find it be intercepted by someone I mistook for the referee.

Now the game tries to make this a little bit easier for you by offering an option to hone in on the primary route first.

This makes it a little easier in terms of telling you where to look, but even then passing was still difficult, no matter if you had Maximum Passing on or not. (Throwing the ball was one beast, catching we’ll talk about later.)

This experience also differed if you used a scrambling quarterback or not. If you did have a scrambling quarterback you could extend the play a little bit by running to what looks like open space. I say what looks like open space because that’s not always the case. If you had a pocket passer and there was no open option that means it’s time to FUCKING PANIC.

All caps lock aside, being a First Person QB was extremely tough to get the hang of. Spending the time putting in the work became super rewarding when you realized that you’re becoming less turnover prone and start to understand how to read an AI defense. You become a god amongst (AI) men. A king looking over the other positional peons that don’t even deserve to be on the same field as you. One you take the virtual helmet, you become one with the ball. A maximum passing mastermind.

Until you have to change positions.

To prevent unnecessary disorientation, when you call a running play you start out in the helmet of the running back. This makes playing running back as simple as possible. Just run, man. 2K5’s running controls are so satisfying that you’ll find yourself leaning towards a run heavy offense at times. Being able to chain and charge up juke and spin moves is incredibly satisfying and make you feel like you’re playing an entirely different game. It reminds you of a hard-as-hell zombie level or something.

The only thing I don’t like is that there isn’t a ball indicator for when you fumble. It doesn’t even tell you if your team recovers the ball or not, which is interesting because I’d at least like to know before the play is over. That’s the only nitpick I have about this mode.

This is where the game gets weird. When you’re a quarterback that throws to a wide receiver, you can switch from the QB’s helmet to the wide receivers helmet. For a microsecond, there’s a wave of panic because you’re seeing a whole new point of view and have to account for so many things that you thought you knew and now don’t

For a microsecond the disorientation is overwhelming as you’re trying to track the ball and the defense while dealing with the jump in perspective. I don’t know if this was intentional, but it seems like your ability to track the ball varies depending on the stadium background. Take a look right here.

Can you see the ball?

How about now? If you can, congratulations, you now have to catch the ball, which leads me to my next point.

Catching the ball. Once you are a receiver you need to try to run the route or put yourself in a position to catch the ball. This all depends on if the pass you threw is even accurate. If not then you would be wasting your time because then the pass just won’t be catchable. If it is catchable, then you have to find the ball in a short amount of time and then, after catching the ball, try to remember where the defense was before you ran a certain direction. If not, you look like this.

If you ever go to the instant replay you can easily see the error of your ways. It’s quite a humbling experience, thinking everything will go your way but it doesn’t. I get it now.

Just kidding, I don’t even think that’s even possible in this game mode.

In this game mode this is the easiest defensive position to try to play. All you have to do is try to rush the QB and maybe tackle the running back or something. It’s pretty dope to try all of the line moves, especially if you’re good. There’s not much else to say here. Sack the QB or switch players.

Using a linebacker is fun if you’re blitzing the quarterback, but if you’re trying to play in coverage, it’s a challenge and a half. Tracking down receivers in this game is tough. Just trying to figure out what the hell is going on is an adventure. Don’t even get me started on play action. You might as well take me out of the play at that point, because it’s the same result.

Sometimes your head snaps to the QB when the ball is snapped and in that split second you can look lost as all hell:

If you think that’s bad you should watch the replay.

There’s a lot to process as a defender, and as a linebacker your head needs to be on a constant swivel, which makes for a pretty intense gaming experience.

Tracking down the receiver is a tough business. Having the patience and understanding that the play might not go to you is the hardest part. It’s also hard to tell if the play is a pass or a run and when you do figure it out it’s almost too late.

In the bright side, it is incredibly satisfying to break up a pass that was sent to who you’re covering. I get why defensive players get excited as shit when they tackle a guy and it goes from 1st and 10 to 2nd and 8.

The farther you are from the ball in First Person Football, the less understanding you have of what’s happening. In this game mode safety is basically corner except you gotta look everywhere, and that’s difficult. Since this game isn’t played with any play-by-play or color commentary you are on your own. You’ll get words for incomplete pass, interception and stuff like that. But the game will not tell you if there’s a run or a pass. You have to work it out on your own, which you probably won’t. Playing safety in First Person Football is the ultimate defensive test. I’ve never been good at this position.

This is fun, sometimes. You actually have to keep track of how long the ball is in the air because if you don’t fair catch there is a good chance the defense will insta-murk you.

When I was a junior in high school I won the state championship in the 100 meter dash for the second year in a row. During that entire summer while I was training for a possible three-peat, our high school football coach would try to get me to return kicks and punts. For months on end this annoying man would come by and go “Hey Kofie, we didn’t see you at practice today” and I’m not even on the damn team. I will admit that the offer did seem tantalizing, but then I would play this part of the game and immediately snap out of it.

Now I know that some of you guys are reading this and saying “Well this guy just explained how football feels in real life. I played football for nine years and I could have told you that”. But that just speaks to the authenticity of the game mode. I have never played organized helmet football in my life, but with First Person mode I feel like I have a good idea of what my life would have looked like if I accepted the coach’s offer to return kicks. (minus the pain)

I sometimes wish the newer games would could back with a mode like this, but we’re talking about Madden so never mind.