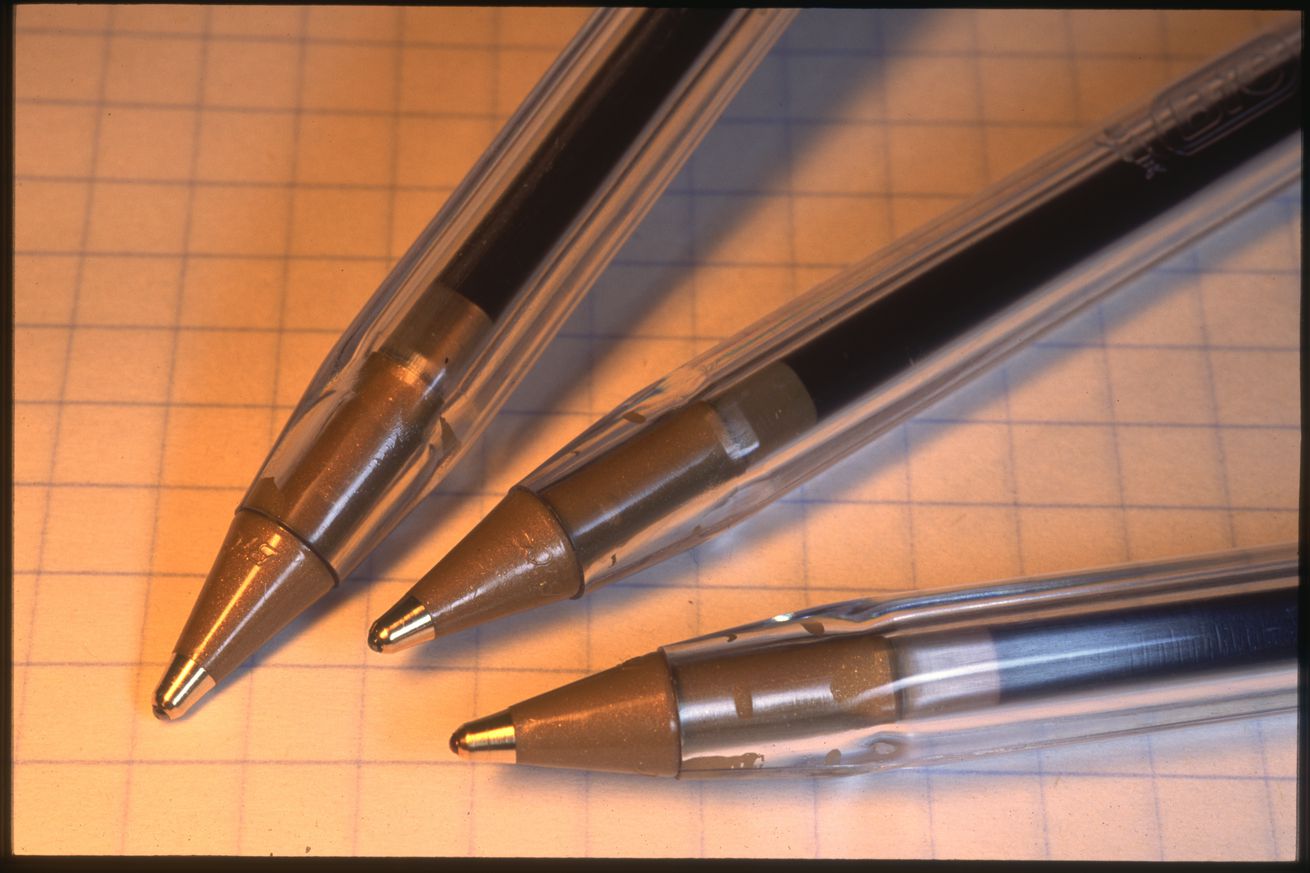 When’s the last time you picked up a ballpoint pen and it wouldn’t write?

My opinion of branded shlock handed out by corporations – Pfizer pens, Coldwell Banker T-shirts, Exxon bibs, what have you – is shaped by a single, singular event. Every once in a while, I recall a story I’d forgotten to tell from my career as a Radio Shack employee; this is one of those.

The early aughts were an interesting time to be a Radio Shack sales associate. The lights were on and the commercials still aired, but we were all very clear on the fact that the company’s existence was finite and that the end was approaching. Well before anyone saw Amazon coming, the likes of Best Buy and Walmart had more stuff for cheaper, and would sell it to you without trying to shake you down for your personal information or harangue you with a confounding litany of sales pitches.

People just weren’t walking into a Radio Shack so much anymore, least of all the mall location I worked at. By this point, the general public understood they wouldn’t be able to shop there without being hassled, and quite often we’d see people stand just outside the entrance, peering inward to try and make out whether there was anything inside worth braving the likes of me. (Sorry. If I failed to pitch you on signing up for a credit card, company-appointed secret shoppers would report me and my hours would probably be cut.)

We sold cell phones, and it was the job of [CELL PHONE PROVIDER]’s district sales rep to make the rounds from store to store. She was a very nice person, and one day she came to our store bearing a fundamentally terrible idea, which was probably foisted on her by some higher-up.

It was a giant wooden lottery wheel that was taller than me, probably about seven feet. I have no idea where it originally came from or who built it, but it would be laughed out of any church picnic I’ve ever been to. It was a gigantic piece of shit that was made mostly of chipboard. It was unsanded, and gave you the feeling that it would give you a splinter if you brushed past it. It wobbled if you poked it, and it would wobble more if you tried to actually use it. The bolt was stripped, so the nut that was supposed to keep it in place would rattle out after a few spins.

The idea here is that if someone bought a cell phone, they were awarded one spin of the wheel. This was an embarrassing experience for all involved, because every slice of the wheel represented a prize more worthless than the last. One prize was a case specifically for a cell phone we didn’t even sell. If I recall correctly, the rest of the prizes were just corporate swag from [CELL PHONE PROVIDER] and various cell phone manufacturers. Motorola T-shirts, Sanyo hats, stuff no one on Earth has ever wanted, stuff that was never intended for anyone they didn’t employ.

The prize that really made me laugh was the Nokia pen. A single pen. Now, if a prize is a single pen, you’d be reasonable to imagine it as a nice executive pen, something that comes with its own little storage case. No, this was just a plastic ballpoint pen, as cheap as the cheapest pen you’ve ever seen, with the Nokia logo on it. Pens this cheap come solely in packs of five or ten or fifty. There’s no way anyone has ever completed a transaction for a single one (1) of these, unless they bought a phone from me and won it in my idiotic carnival game. This was your reward for signing a two-year cell phone contract that put you on the hook for hundreds and hundreds of dollars. It didn’t even have a retractable click mechanism.

Shitty jobs have many, many ways of eroding your dignity. They’ve got a whole toolbox. Sometimes the humiliations are without question intentional and actively cruel. Even when they’re the accidental consequences of your employer’s awful ideas, it really feels like they’re twisting the knife. I debased myself with this wheel once and once only. After I sold a phone to a customer, they asked about the wheel, so I couldn’t not let them spin it.

After this, my manager and I agreed that we were done with the wheel and shoved it into storage. This only lasted a few days. When the [CELL PHONE PROVIDER] rep returned, she insisted that we keep it out there, lest she get in hot water. Furthermore, we were instructed to violate the mall’s rules by shoving it all the way out in the middle of the store’s entrance – so far out that half of it stuck out into the public area.

It took a couple of phone calls to ferret out the logic involved.

The people making the decisions wanted to literally get it in people’s way. This was their solution for getting people into the store: it would be in their way, so they’d notice it, become intrigued, and walk into the store. This was their answer for flagging mall traffic and the dominance of big-box retailers. We were to behave as clingfish, sticking ourselves out there and trolling for detritus, in apparent hopes of luring in the completely imaginary type of person who bumbles in, submits to a credit check, and signs away hundreds of dollars because they were literally funneled into the store.

This was it! This was the only idea they had left! Faced with a retail economy that was irreversibly leaving it behind, the company resorted to a sort of base, literal, concrete logic a chicken could understand. People buy things. Things are in store. Put people into store.

Mall shoppers would sometimes brush the wheel as they walked past, sending it into a slight but menacing wobble. I want to stress once again that this was a very large, hideous thing. It was taller than me and it was heavy. Its base wasn’t very stable. It clogged the store’s entrance. It was so easy to imagine it falling over. A couple of times, someone snagged their clothes on the little nails, crudely hammered into the wood, that served as teeth for the flapper.

One morning, after I opened the store and reluctantly dragged it out front, I noticed that the nut used to fasten the wheel to the bolt was missing entirely. I called the district office. They knew how badly we wanted it gone and dismissed me with an, “it’ll be fine.” I really shouldn’t have left it at that, but a customer walked in, then another, then another. As usual, I was running the store all by myself. I just got tied up.

You couldn’t have bought or sold that little Nokia pen for a cent, but I don’t want to disparage its ingenuity. Ballpoint pens are actually pretty impressive. Prior to their invention, people were stuck with dip pens, which seem like they were obnoxious to use, and fountain pens, which were prone to spilling, tricky to maintain, and relatively expensive. The ballpoint changed everything. Its specially-formulated, paste-like ink adheres perfectly to the ball mechanism, and it’s thick enough to prevent spilling. They’re outrageously cheap to produce, and they last a long time. Odds are, you have a ballpoint pen in your closet somewhere that you haven’t used it for years. Dig it up right now and give it a good scribble; I’ll very confidently bet it works just fine. Especially these days. When’s the last time you picked up a ballpoint pen and it wouldn’t write? I don’t have any hard data to cite, but I strongly suspect they’ve become far more reliable over the last couple of decades alone.

The kid was probably four or five years old. Miraculously, he was completely unhurt. Not only did his mother pass up on a tailor-made lawsuit opportunity, she actually apologized to us. Maybe it was his fault that he bumped into the lottery wheel, but it certainly wasn’t his fault that the wheel component, which weighed at least 30 pounds, slipped off the bolt and fell on top of him. This incident does not impact my rating of the ballpoint pen in either direction.