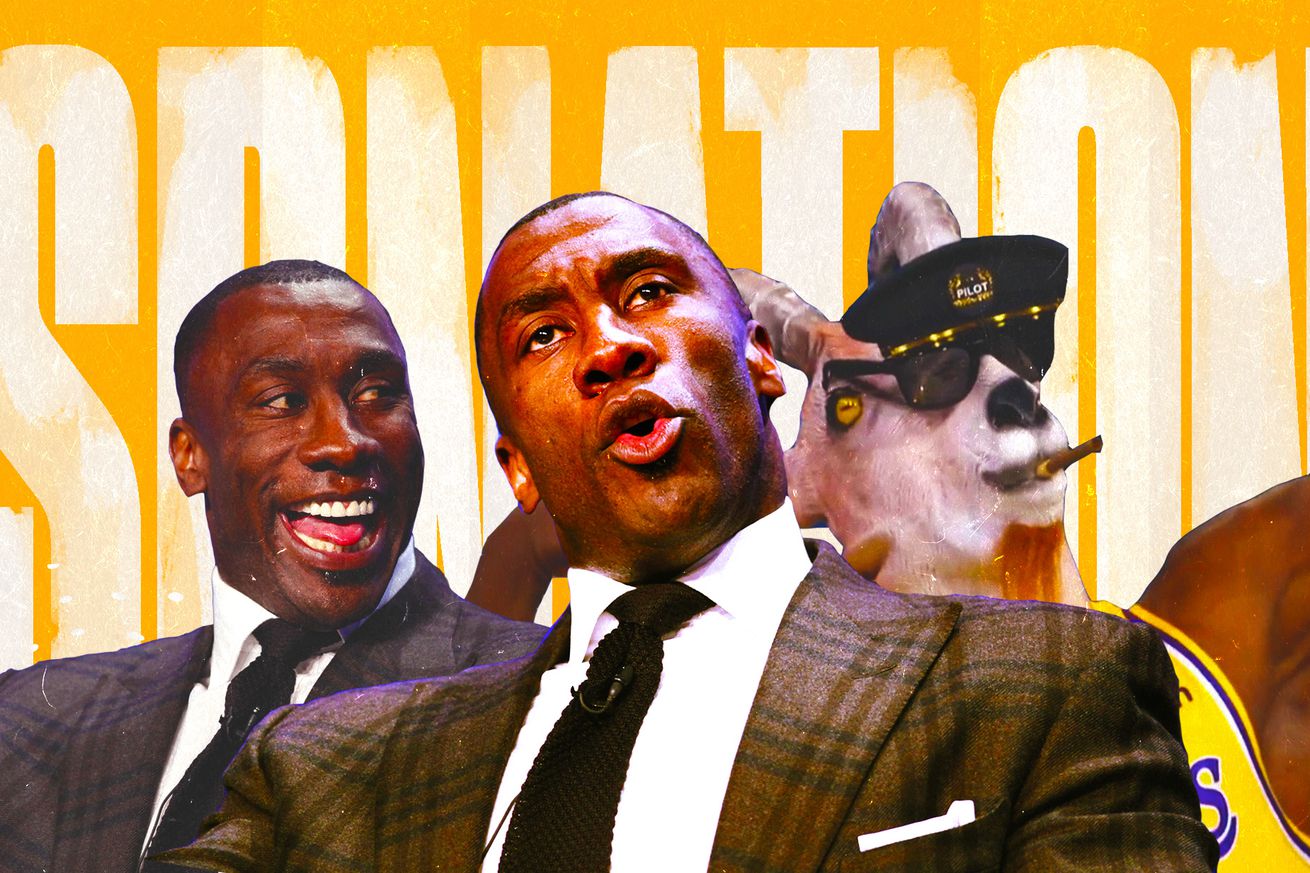 Shannon Sharpe memes are more than just funny. They’ve become an impactful piece of pop culture from one of the most genuine and incisive people in sports media.

A pro football career by the numbers: 815 receptions, 10,060 yards, 62 touchdowns, eight Pro Bowl selections, three Super Bowl rings, and a bust in Canton. That’s Shannon Sharpe’s career statistical rundown, and yet what truly separated him from his peers was his personality. He made his presence felt verbally for 14 seasons, becoming one of the game’s greatest shit talkers.

That personality also made Sharpe a television star long before it was his job. He was one of the breakout stars of the inaugural season of Hard Knocks. One of his first widely disseminated clips occurred in 1996: During the Denver Broncos’ November rout of the New England Patriots, he pretended to call the president of the United States and request the National Guard to aid his floundering opponents.

Since the premiere of Fox Sports 1’s Skip and Shannon: Undisputed 20 years later, Sharpe’s incisive commentary on sports and their intersection with culture have made him the perfect foil to Skip Bayless’ smarm. More than that, he’s become a living meme, which has helped him stand out as an elite analyst. Whether it’s an exasperated reaction to Bayless’ arguments or lusting after Nicole Murphy, Sharpe has forged a second career as a viral sensation that has turned him into one of the foremost voices in sports.

The beauty of Sharpe’s evolution into a meme is it happened naturally. Memes are stolen moments used to capture the mood of a situation with pinpoint accuracy, and they work best when they’re drawn from genuine material. Sharpe, now 50 years old, is largely the same man who clowned the Patriots. The memes Sharpe has inspired — from using the way he says “SKIP” in Uno, to his pronounced look of disapproval and high-pitched “That ain’t no problem” in response to extra credit assignments and washed adults’ delight in breaking plans — are cut from moments in which he’s simply being himself.

“I just try to give a glimpse of what I’m like off the air,” Sharpe told the New York Times in 2007 about the energy he brought to his old job at CBS Sports’ The NFL Today, adding, “but I don’t want to be that animated because it would really distract.”

When he abruptly presented a Black & Mild cigar during the Oct. 2, 2017, broadcast of Undisputed, it clicked with the internet because of how casual he was. It’s not just the image of Sharpe with a Black & Mild dangling from the corner of his mouth that resonates — it’s his body language and the inflection in his voice.

You know Sharpe isn’t faking. Smoking a Black or sipping Hennessy in celebration — or simply because it’s Monday — are activities his audience identifies with. Even if they don’t indulge, they know others who do. And Sharpe wasn’t even trying to go viral.

“I mean, I never, never thought in my wildest imagination that would take off, I mean, they put a song to it,” he told Uproxx in 2018, saying he was “shocked” by the response.

Sharpe’s ascendance over the last two years emphasizes how limited he was for a decade at the Xs and Os-focused The NFL Today. After joining the show in 2004, he was let go in 2014. Sharpe is at his best when unbound, and Undisputed set him loose. “This platform gives me an opportunity to talk about everything, from sports to social issues,” he told GQ in 2018. “It allows me to be me.”

The show began in September 2016, just weeks after Colin Kaepernick’s protest of systemic racism began, and two months before Donald Trump was elected president of the United States. When Trump admonished Kaepernick and other players — almost exclusively black players, to be clear — for protesting in September 2017, Sharpe spoke in detail about the root of the issue.

This frankness, along with the conviction that inspires the many memes, are only able to shine because Sharpe was given freedom that he hasn’t taken for granted. And along with the platform, he’s embraced the jokes.

On Twitter, Instagram, and Undisputed, Sharpe leans into the memes without pandering. At a time when media figures are expected to effectively play chess on social media and still make it look like they aren’t trying, Sharpe comes across as authentic in a way that many of his contemporaries can’t.

We’re in the midst of the Content Era. Outlets and brands are locked in an arms race that is unfolding on our TVs and timelines, stepping on each other for ratings, views, and relevance.

Networks like FS1 lean on their talking heads to account for all three. Undisputed is a debate show in the image of its rival, First Take, Bayless’ former vehicle where he first established his dynamic with Sharpe, who occasionally filled in for Stephen A. Smith. Bayless has his own persona: Contrarian White Man™. He’s a titan of the hot take economy: polarizing and antagonistic, solely to provoke the most visceral reactions he can out of sports fans. He supports Tim Tebow, criticizes LeBron James, and roots for the Dallas Cowboys with unwavering passion.

And to be fair to Bayless, being “the most hated man in sports” has been lucrative. But where his internet presence is steeped in venom, Sharpe’s is steeped in joy.

“Uncle Shannon” has undoubtedly made the show more watchable. According to the Charlotte Observer, average daily viewers for Undisputed increased 45 percent from 2016 to 2017. Citing Fox Sports, Forbes reported that ratings jumped another 37 percent from 2017 to 2018. The improvement correlates directly with the rise of Sharpe, who frequently obstructs Bayless’ arguments and outshines him. Bayless’ notorious hypercriticism of James is a running gag at this point. On more than one occasion, Sharpe has donned a James jersey and a literal goat mask (with a Black & Mild hanging from the mouthpiece, of course) to troll his cohost.

Sharpe’s naturally meme-able personality does more than entertain. Writing for The Fader, Jason Parham branded memes “our most forward-facing cultural markers on the internet.” Later writing for Wired, Parham called them “one of the more evolved languages born of the social media age — coded by community, shared experience, race, and gender, among a flood of other circumstances.” Memes are a dialect of popular culture, which is undeniably rooted in and shaped by black culture.

And Sharpe’s perspective is distinctly black. It radiates from his commentary and humor. In a piece for The Atlantic, Lauren Michele Jackson wrote memes exist on borrowed time. The reason Sharpe has yet to go the way of, say, Crying Jordan, is testament to their potency and versatility, as well as Sharpe’s relevance in sports culture. Sharpe memes have become part of a shared language anyone can speak, which also notably elevates black expression. (Note: There are downsides to universal access to memes, too. Jackson has written extensively about the “digital blackface” that memes enable.) They amplify the images, voices, and creativity of people who might be otherwise overlooked.

It’s no secret that Bayless and Sharpe represent certain segments of their show’s audience. Sharpe knows the internet is watching his every move when he sits down at the Undisputed table each morning. He brings his own perspective, but also that of the numerous people who opt to speak through him via meme. It’s what people mean when they talk about “feeling seen,” and Sharpe makes sure many of us are, even if we’ll never step in front of a camera.